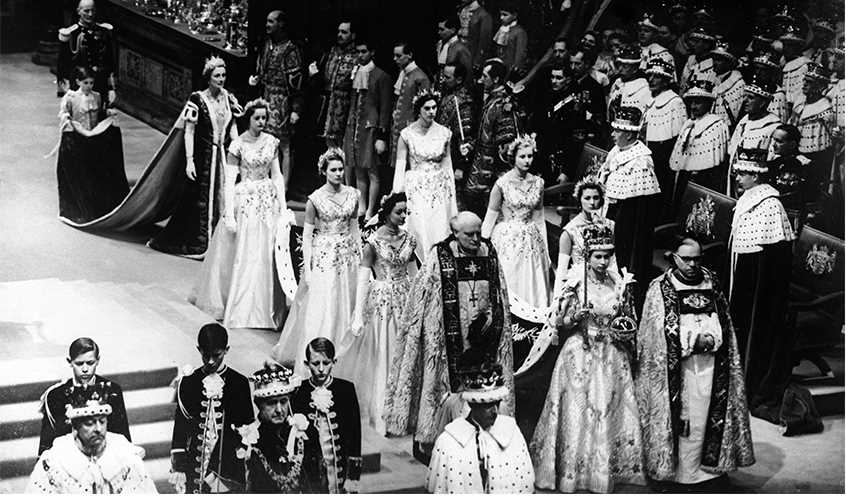 There were 16 months between The Queen’s accession to the throne and her coronation in 1953, and time was vital in order to plan a vibrant and revitalising celebration.

It was only eight years after the end of the Second World War; London was littered with bombsites and the whole of the country was still experiencing rationing.

The plans for the coronation had to support the rebuilding of a nation. From the blue carpet used throughout Westminster Abbey that was given to Anglican Churches to carpet their floors, to the timbers for the platforms that were cut to lengths so they could be reused by the building industry.

8,000 people, including Prime Ministers and Heads of State from around the Commonwealth, gathered in Westminster Abbey to witness the coronation ceremony.

It was a ceremony that had mostly remained unchanged for over 1,000 years; it was a rite of passage that was carefully orchestrated to emphasise the new Queen’s impressive lineage.  Because of this, it wasn’t just the traditions of the coronations of her father, George VI, and grandfather, George V, that were followed.  The stage in the Abbey was designed to be almost identical to that of Queen Elizabeth I’s.

Of all the changes that came with the coinage reform during the reign of George III, one of the most significant was surely the new design for the reverse of the gold Sovereign. The traditional heraldic approach was abandoned in favour of a design of classic beauty by the talented gem engraver, Benedetto Pistrucci.

It seems that Pistrucci himself suggested the legend of St George for the new gold Sovereigns. His interest in St George had been provoked by Lady Spencer to whom he had been introduced by Sir Joseph Banks, who was the President of the Royal Society and friend of William Wellesley Pole, who was Master of the Mint.  Her Ladyship showed Pistrucci a wax model of St George and asked him to make another ‘in the Greek style’; Lady Spencer had no time for a figure dressed in gothic armour, a sentiment which could not fail to appeal to a temperamental Italian whose favourite maxim was said to be ‘study Greek originals day and night’.

The idea evidently appealed to Pole who, to avoid confusion, wanted the Sovereign to look as different as possible from the superseded guinea. And, after all, what more appropriate figure to grace the reverse of the Sovereign than the patron saint of England? Thus, for a reported fee of 100 guineas, Pistrucci undertook to provide a jasper cameo of St George, taking as his model an Italian servant.  The result is a classic masterpiece, a coin design combining such grace and dramatic impact that it now ranks as one of the best loved and most enduring of numismatic designs.

Born in Rome on 29 May 1784, Benedetto Pistrucci came to London in 1815 under the patronage of the Prince Regent.

His reputation as a gem engraver of outstanding ability had gone before him and, on his introduction to the Master of the Mint, he was commissioned to prepare designs for the new gold and silver coinage of George III. He engraved the coin portraits of both George III and George IV but is perhaps best known for his magnificent Waterloo Medal and his George & Dragon created for the new gold Sovereign of 1817 and adapted for the gold five-pound piece and silver crowns.

As a foreigner Pistrucci could not be appointed Chief Engraver of The Royal Mint, and was instead employed as Chief Medallist. His work desk still remains on site to this day.