Towards the end of December and as we began 2017, the price of gold was at a monthly low of £922 per ounce. It began to rise steadily throughout the month and by the middle of January, the gold price rallied ahead of both the Trump inauguration and Theresa May’s Brexit speech. Ahead of the much-anticipated speech by the British Prime Minister, the gold price hit a monthly high of over £1000 per ounce, before falling shortly afterwards. 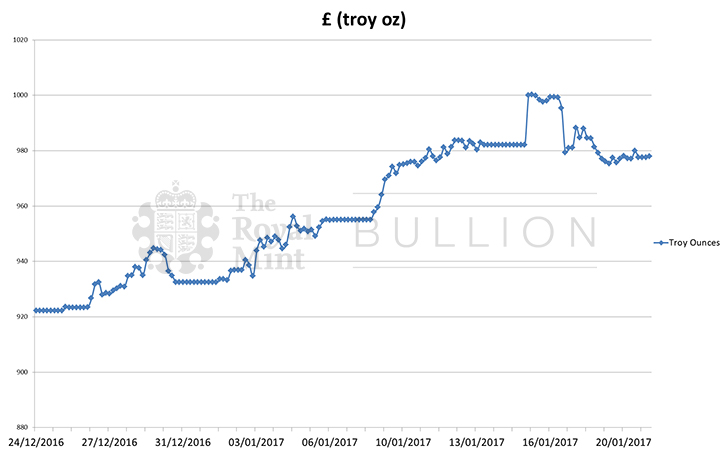 “The Strong Dollar is Killing us” – Trump

Ahead of the Trump inauguration, on January 17th, the US dollar index was down by 1% at 100.51 following two comments from President-elect Donald Trump in an interview with The Wall Street Journal. Trump suggested that the border-adjustment plan, a proposal that would tax imports and exempt exports, was “too complicated.” Additionally, he said the dollar was “too strong.”

“Our companies can’t compete with them now because our currency is too strong. And it’s killing us,” Trump told The Journal, referring to competition from China.

Following these comments that suggest a concern over the currency’s strength, the dollar index fell to near six-week lows, while sterling edged down after posting its biggest one-day gain since at least 1998 after Theresa May outlined her ‘Brexit’ plans. Sterling logged its biggest daily gain since at least 1998 as May promised a parliamentary vote on Britain’s deal to leave the EU and sought to draw a line under discussion of a “hard” or “soft” Brexit.

The World Gold Council also expressed a similar concern that the strength of the dollar could limit the global appeal of gold this year. It said, “whilst the UK economy is still expanding the pound fell sharply following the referendum decision and continues to weaken every time the markets sense that there is an increased chance of a ‘hard’ Brexit”.

Following the decision by the Indian Government to remove certain high-value notes from circulation, an immediate impact was seen on gold demand which rose sharply during November 2016. India is one of the world’s largest gold-buying countries and whilst demand grew immediately following the news in November, December onward saw some of the lowest purchases of gold in India for a significant period and, according to the GFMS, some of the lowest levels of imports since 2003.

The World Gold Council (WGC) also recently released their gold market outlook for 2017, which put India firmly in the spotlight. The WGC forecasts gold imports may be cut in half in 2017, leading to the lowest import levels in the past 8 years. The Council also suggested that a seven-year low in gold demand was reached in 2016.

The Trump Inauguration and Gold

On Friday 20th January ahead of the Trump inauguration, gold prices briefly dipped as investors expected U.S. President-elect Donald Trump to calm markets with a return to conciliatory language in his inaugural address. The general consensus within the market was that if Trump repeated the encouraging language shown immediately after the election last November then there would be less demand for gold, often favoured by investors as a ‘safe-haven’ metal. Also as we approached the inauguration, the stronger dollar (in which gold is priced) makes it a more expensive choice in other currencies. Better than expected U.S. jobs, housing and factory data reinforced the view that the U.S. economy is sufficiently robust to warrant interest rate rises. Gold is highly sensitive to rising rates, which lift the opportunity cost of holding non-yielding assets such as bullion whilst boosting the dollar.

In early January, Fox Business News cited three key catalysts which could influence gold in 2017. Although the areas identified were in both the USA and India, the knock-on effect on the price and demand for gold in the UK and internationally could still be seen. The key areas identified were –

The Federal Reserve – The leading catalyst for physical gold in 2017, simply because gold has no dividend and decisions by the US Federal reserve regarding interest rates always has an effect on gold. As a result, compared to interest-bearing assets such as savings accounts and U.S Treasury bonds which have a ‘near-guaranteed’ nominal return rate, gold may lose its lustre. The latest consensus suggests that the Fed will raise rates by 25 basis points three separate times in 2017. If this prediction comes true, gold could certainly have its struggles as some investors switch out of the yellow metal and into perceived-to-be-safer interest-sensitive assets.

Donald Trump – As we have already seen, the effect of a Trump presidency is still very much an unknown. Many market commentators suggested that if Trump was elected, the effect on the gold price could be significant, partly because Trump is the first president ever elected who has little to no previous political experience. This means that investors are still unsure what his stance will be on a number of factors. Uncertainty is one of the biggest influencers in the gold price – and this is no different.

India – The final catalyst, as cited by Fox Business, is India. India is the second largest economy for gold in the world after being overtaken by China in 2015. Instead of purchasing Indian bonds or buying stock, many of India’s residents who have savings choose to purchase gold jewellery as a store of wealth. In 2015, India purchased 700 tonnes of gold for jewellery, yet it mines just two tonnes of gold annually. India’s appetite for gold is great news for precious-metal miners and physical gold, but it is creating a growing problem for its government.  As opposed to storing wealth in rupees in central banks, the estimated 20,000 tonnes of gold in aggregate savings doesn’t increase the lending power of its banks and as such, the government may choose to impose further taxes and sanctions to attempt to lessen the appeal of gold.

And in other news….

Man Who Stole $1.6 Million Bucket Full Of Gold in Midtown Manhattan Has Been Captured

In a heist which was perhaps even more brazen than the Hatton Garden safe deposit robbery, in November last year, a man in New York stole an 86-pound (nearly 40 kg) bucket full of gold worth $1.6 million from the back of an unattended armoured Loomis vehicle in broad daylight. The suspect, described as 5 feet 6 inches tall, 150 pounds and in his 50’s, managed to get away without a hitch. Although police quickly identified a suspect, his whereabouts were unknown until recently when he was captured and arrested in Ecuador.