In June 2012, people across the UK celebrated The Queen’s Diamond Jubilee, the 60th year of her reign. At that point only one other monarch had ruled for longer, the Queen’s great-great-grandmother, Queen Victoria. Queen Elizabeth II has since surpassed even that achievement, when in September 2015 she officially became the longest-reigning monarch in our history.

It was a year of celebration and ceremony, but festivities came to a climax on 3rd June 2012, when the Diamond Jubilee pageant sailed along the River Thames. Over a million spectators braved the terrible weather to watch from the banks of the river as 670 boats sailed past. The Queen and His Royal Highness The Prince Philip, Duke of Edinburgh enjoyed the spectacle from the royal barge, the Spirit of Chartwell. The barge was decorated with thousands of flowers and the coats of arms of the Commonwealth countries.

During the extended Bank Holiday weekend, 10,000 people attended an afternoon picnic in the gardens of Buckingham Palace. Across the country, towns and villages took part in the Big Jubilee Lunch, with many roads being closed to hold street parties. It was a rainy day but the bad weather didn’t dampen the spirits of the hundreds of thousands of people who came together in celebration.

A sense of occasion

National events like the Diamond Jubilee bring the nation together. From solemn events, like the laying of wreaths at the Cenotaph on Remembrance Sunday, to regular traditions like the Changing of the Guard, the monarchy is very much at the heart of these important ceremonies.

The Changing of the Guard is officially known as ‘Guard Mounting’ and is very popular with tourists. The ceremony takes place when the Old Guard hands over responsibility for protecting Buckingham Palace to the New Guard. The Queen’s Guard wear red tunics and towering hats called bearskins. The regiments that take part in the ceremony, and therefore protect the Palace, are: the Grenadier, Coldstream, Scots, Irish and Welsh Guards. There are also two regiments of the Household Cavalry – the Life Guards and Blues and Royals.

Trooping the Colour takes place every year. It dates back to the time of Charles II, when regimental flags or ‘colours’ were paraded in front of the troops to ensure they would recognize their own regiment in the confusion of battle.. Nowadays over 1400 officers and troops, 200 horses and 400 musicians come together for Trooping the Colour. The parade begins with The Queen’s inspection of her troops. Every year a different regimental colour is trooped. 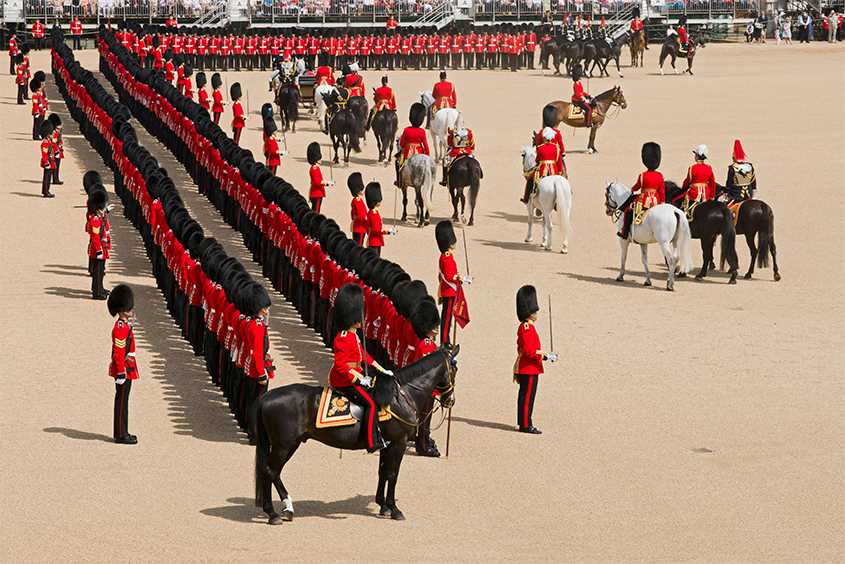 All British coins feature a portrait of The Queen. Before photography, the monarch’s portrait on a coin would probably be the only image people saw of their ruler. Today, though, The Queen is one of the most photographed people in the world. The Queen’s portrait has to be instantly recognisable while also capturing some of the national pride that she represents.