Between the 1st and the 26th of April 2017, the price of gold ranged from a low of £984 to a high of over £1032 a troy ounce. This was the highest price seen during 2017 and the highest seen in nearly six months. This change was due in part to geopolitical tensions while investors contemplated the upcoming French presidential election as well as U.S. relations North Korea and Russia.

The gold market was shaken by the French presidential elections ahead of the first-round of voting which took place on April 23rd. Following this, candidate Marine Le Pen now faces Emmanuel Macron in the second round on May 7th. Some are suggesting that the election of either of the candidates could lead to disruption within the European Union which could in-turn affect the Euro.

In conjunction to this, April saw growing tensions in Asia centred on North Korea’s recent missile tests and also in the Middle East, where the U.S. launched a targeted airstrike in Syria in mid-April. The U.S. has also hinted at the potential of future actions which have investors on edge and are a factor which generally supports gold price increases. 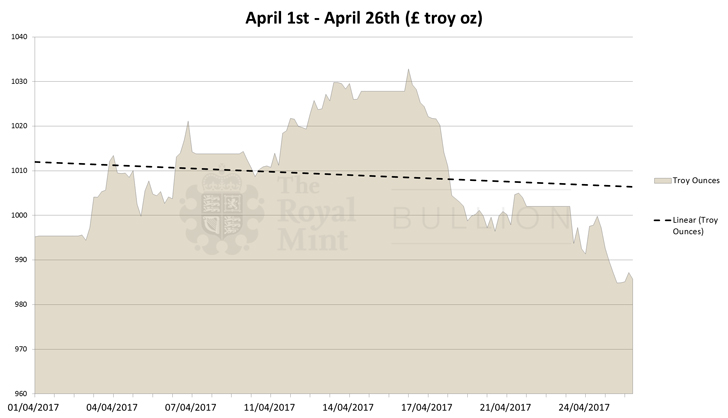 The Dubai Precious Metals Conference took place on the 9th and 10th of April at the Address Hotel, Dubai Marina. With the theme ‘Connecting Markets and the New Era of Global Trade’, the event hoped to bring together miners, investors, engineers, asset managers and professional services representatives from across the precious metals sector with an aim to explore the industry’s most pertinent topics. The discussions focused on how shifting geopolitics will impact the trade flows of precious metals.

The first day of the conference also included a discussion about the future for precious metals, including master classes on technology innovation from The Royal Mint. Speaking about the application of Blockchain technology in the industry, Dan Clegg, Director of Business Development at The Royal Mint said, “While thinking about how The Royal Mint establishes itself for the future, we realised that Blockchain currencies and gold had a lot in common, and where they had differences they seemed to compensate for one another. This was the motivation behind RMG, an innovative new product launching in 2017 that will provide the investment performance of the London Gold Market with the price transparency, real-time price discovery and trade execution of a traded security. We believe these features, coupled with the guarantee of zero ongoing annual management fees and free storage, represents one of the best and cost-effective ways to invest in physical gold today.”

The new platform will allow institutions to trade “Royal Mint Gold,” or RMG, a new digital token issued by the Royal Mint. Each RMG will represent the digitised version of 1 gramme of gold stored in the Royal Mint’s vault. Transactions will be recorded on a blockchain, technology that allows a network of computers to keep track of and verify asset ownership.

Is Islamic Finance set to Transform the International Gold Market?

Recently, the Accounting and Auditing Organization for Islamic Financial Institutions (AAOIFI) and the World Gold Council jointly announced the introduction of Shari’ah Standard No. 57 on Gold. The standard sets out the rules and guidelines for Islamic investors to participate in the gold market, and assists in clarifying which specific gold-based products are permissible under Islamic law.

Until this was introduced, there was little guidance for Islamic investors on whether gold could be purchased and owned as an investment, which meant that investors largely stayed away from the gold market altogether.

The new standard, however, sets to change the prospects for the Islamic world and allows Islamic investors to invest in vaulted gold, gold savings plans, gold certificates and physical gold ETFs.

You can find out more on the World Gold Council Shari’ah Gold website.

The dollar dropped to a nearly three-week low against a collection of major currencies on Tuesday, April 18th, pressured by lower Treasury yields, while sterling soared after Prime Minister Theresa May called for an early general election.

The dollar is still expected to strengthen in the medium to long term, based on the outlook for U.S. monetary policy going forward. However, with the focus currently on ongoing geopolitical tensions, U.S. Treasury yields fell which boosted demand for safe-haven U.S debt.

UK Political Risk Should Contribute to Solid Demand for Gold

Commerzbank, Germany’s second-largest bank, recently suggested that the U.K.’s political situation should be supportive for gold even though the metal did not necessarily see any immediate benefit after Prime Minister Theresa May’s surprise announcement that new elections will be held in early June.

May hopes that this step will give her a strong mandate from the British people during the process of Brexit. “That said, May’s announcement yesterday is unlikely to have any impact on what are likely to be difficult Brexit negotiations between Great Britain and the EU (European Union),”

“As far as participants on the gold market are concerned, this means yet another political risk factor that should contribute to solid demand for gold,” Commerzbank added.  [source] 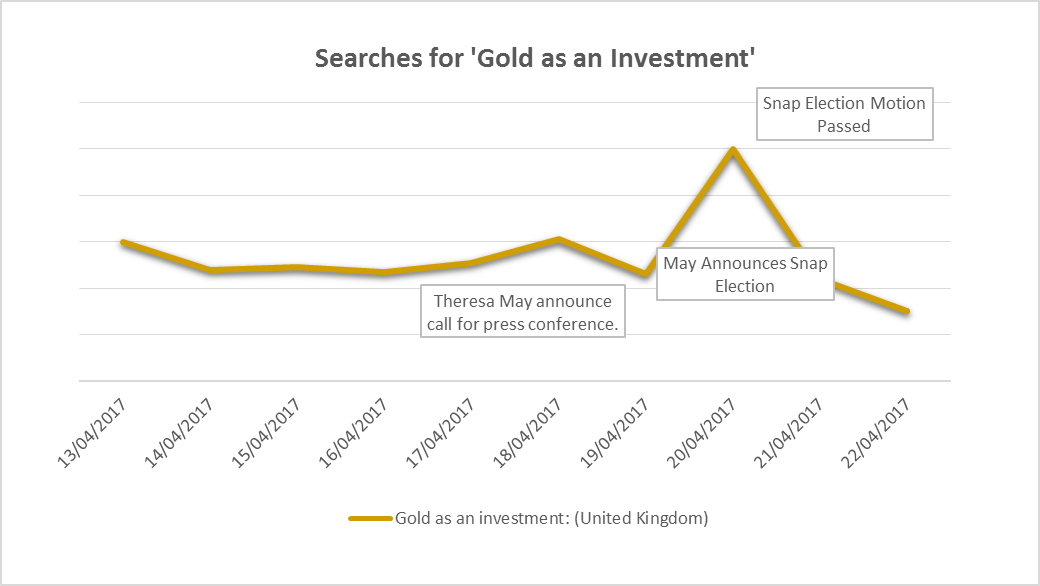 Interest surrounding gold also peaked prior to and after the announcement by Theresa May as is shown in the graph above. With data from Google Trends, the UK searches for ‘gold as an investment’ noticeably increased.

Following a pool of over 100 nominations, The Royal Mint has been shortlisted for the Platts Global Metals Awards ‘Industry Leadership Award for Precious Metals’. An independent panel of international experts, whose background and experience include regulation, corporate leadership, trading and technology, will determine the overall award winners at an event on May 18, 2017, at the Marriott Grosvenor Square in London.

You can find out more about the awards here.