Our annual review takes a look back at some of the top bullion stories throughout 2016, a year which included Brexit; the US Presidential election; possible interest rate changes by the US Federal Reserve and the Bank of England as well as significant changes in the price of gold and other commodities throughout the year.

On the whole, 2016 was a volatile year for gold, with significant increases and falls around certain key events and an increase from a low of just £716 to a high of over £1055. The most notable increase in sterling terms was of course following the Brexit referendum in June / July, where key analysts and market commentators correctly predicted substantial price rises if Britain did vote to leave the EU. Although this is the case, as political commentators were predicting a ‘remain’ vote on the run up to ballot day, the shock of the outcome can clearly be seen in the graph as a sharp increase as the votes were counted. With this said, although the US election results were perhaps just as unexpected, the steady decrease in price is perhaps more interesting, as prior to the US election taking place, commentators were also predicting a ‘Brexit-style’ price increase if Trump was elected. This, of course, wasn’t the case, and gold market sentiment following the result showed more of a general decline.

With the gold price, it is, of course, important to take a wider view. If we expand the graph from a 1-year look back to a 5-year review, what may be surprising to some is that the price increase which we saw post-Brexit was not an ‘all time high’. In fact, even the top price recorded ‘post-Brexit’ of £1054 still falls short of a high of £1103 seen at the end of September 2012. 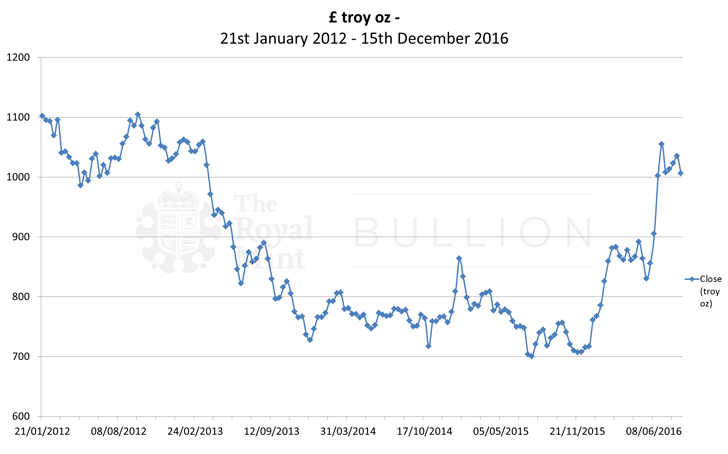 In January 2016 we reported that worries of weakening economic growth in China and unrest in the Middle East meant that investors in the global stock market began to turn to the ‘safe haven’ of gold. Many market commentators also suggested that falling oil prices were to blame for this increase in demand as oil prices hit a new 12 year low in mid-January. It was also reported that the market majority no longer expects another hike in interest rates from the Federal Reserve in the US later in the year.

This rally in gold demand and increase in price continued into February where we reported that gold prices rose by over 24% in early 2016, also prompted by falls in oil prices and safe haven trading. As shown below, between the end of 2015 and the end of February, the gold price rose by over 24% and the silver price rose by over 14%. Meanwhile, equity values fell by 2.3% (FTSE100) and 5.2% (Dow Jones Industrial Average), and the Pound lost 6% of its value against the US Dollar. 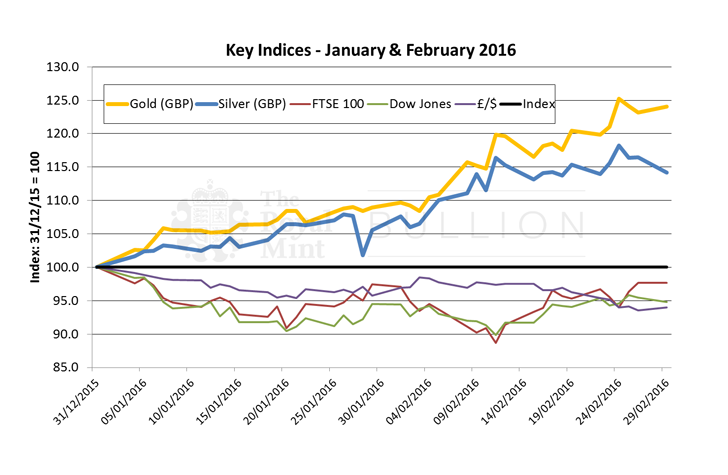 February was also the first time many began seriously discussing Brexit and the possibility of a ‘gold rush’. Gold demand in other parts of the world, especially Asia and India, also began to steadily increase. In March, a study by the World Economic Forum reported that of the top concerns which could affect business in the next decade, ‘fiscal crisis’ was stated as one of the ‘top five concerns’ across eight global regions including East Asia, North America and Europe. One of the other cited ‘top concerns’ to business was underemployment and potentially eroding skill sets that businesses predict they will require in the future.

We also began to see a decrease in demand for gold in India in conjunction with protests and price hikes in the area due to increased taxes being levied by the Indian government. Towards the end of March, it was suggested by Fortune.com that gold was heading for its biggest quarterly gain in nearly 30 years prompted by a drop in equities which boosted the appeal of gold as an alternative asset. Concerns that the US Federal Reserve would increase interest rates receded, and the increase of 16% in the first three months of 2016 (gold’s biggest quarterly rise since 1986) was reported to be caused by a combination of “safe-haven demand on the back of worries about China in particular”.

In April 2016, it was reported that the price of gold could ‘explode’ if Britain votes for Brexit, though a vote to ‘remain’ still appeared increasingly likely. This sense of uncertainty started to impact the financial markets, with much attention placed on the performance of the pound and the euro, as well as the price of gold. In April, China also launched its much anticipated new gold benchmark, with twice-daily auctions on the Shanghai Gold Exchange to fix the price of gold. The launch of the Shanghai exchange was hailed as a landmark event which was set to challenge the century-old system of fixing the gold price in London on the London Bullion Market Association (LBMA).

From May through to July, the news was dominated with discussion surrounding Brexit. One of the most popular posts on the Royal Mint Bullion blog was the results from our ‘Brexit and Gold Survey’ where it became clear that a large percentage of respondents felt that uncertainty surrounding the EU Referendum and the Brexit debate is having a significant effect on gold and precious metals. Our second post, following the Brexit result, also proved popular where we reported that following the vote, many commodities which are dependent on global demand, such as oil, fell sharply in response to the EU referendum vote and the uncertain trading conditions which resulted. Similarly, at a point, the pound dropped to its lowest level since 1985 and the FTSE 100 saw a dramatic decline as global markets and investors reacted to the somewhat unexpected news.

The decision by the Bank of England not to change interest rates was also reported in late July. Many had suggested that interest rates could be cut to a new low and if the rate was reduced, it would have been the first change for more than seven years. In response to this, the FTSE 100 began to rise and hit an 11 month high on July 14th and the pound also began to rise as it approached the highest level in more than a week versus the dollar. However, following the somewhat surprising decision that interest rates would not be cut, gold fell to a two-week low as global equities stayed in positive territory.

In August, gold recorded the first monthly decline since May as speculation that the US Federal Reserve would raise interest rates this year declined. Interestingly, this was the first time gold had dropped during the month of August since 2009 as demand generally increases during this period ahead of the wedding festival in India. At the same time, imports of gold into India fell and demand for gold in China, the world’s biggest producer and consumer of gold, declined which was blamed on the Brexit vote.

September 2016 saw the first presidential debate between Clinton and Trump and, as many felt that Clinton had the upper-hand following the debate, equity markets bounced back, hinting that investors were beginning to turn to riskier assets. Analysts said gold could be under pressure if Trump emerged as a winner in the November elections, as the dollar was likely to benefit from the Republican candidate’s stance against low-interest rates.

Our October 2016 market review was an ‘election special’ as following the somewhat unexpected election results, the financial and precious metal markets were under a great-deal of scrutiny.

On the run up to the election and between the 5th and 7th of October, the price of gold fell sharply to ‘pre-Brexit levels’ and dropped below a key technical threshold – ‘the 200-day moving average’ which is a position used by analysts to predict future price fluctuations. In sterling terms, the price of gold dropped 3.3% and fell to under £1000 an ounce. This was reported to be the biggest one-day drop in three years. As a result of this, many UK bullion dealers reported a huge rise in physical demand as investors chose to take the opportunity to buy. Silver also saw losses at the beginning of October and dropped 9.5% – its steepest slump since 2013.

Following the election result, market reaction was initially negative, with major stock indices turning sharply and immediately downwards. In the early hours of the morning in the UK, the gold price soared – led by the Shanghai afternoon fix. The dollar price of gold surged by almost 5% for UK buyers.

But the simultaneous weakening of the dollar, and a rebound in world markets in the morning saw the price of gold retreat back to just over £1040 by early trading in London, the same price as two weeks ago. This price continued to decrease steadily throughout the day.

This activity wasn’t just seen in the USA as trading on our own platform royalmintbullion.com quickly surpassed previous records set after the Brexit vote. However, the threat of a so-called ‘Brexit-plus-plus’ impact that would wipe trillions off global markets fortunately failed to materialise. This was due, in part, to Trump’s acceptance speech. “Mr Trump managed to sound quite conciliatory and presidential in his victory speech this morning,” Mitsubishi analyst Jonathan Butler told the Reuters Global Gold Forum. “There was none of the harsh rhetoric that we heard during the campaign. This calmed the markets and helped boost the dollar, eroding gold’s gains,” he continued. “[But] the Trump win is still essentially bullish for gold.”

The short to medium term effect of the nomination and subsequent election of Trump is still that of a positive overall market sentiment. But we are still yet to see the impact of local and foreign economic and policy changes imposed when Trump is inaugurated on the 20th January 2017.

Towards the end of 2016, we also saw the launch of the 500g gold bar on the Royal Mint Bullion website, as well as the latest coins in the Lunar series, the Year of the Rooster bullion coins.

Also, following the successful introduction of the Queen’s Beasts range of bullion coins earlier in the year, the second coin in the series, The Griffin, was also released.

Looking forward, 2017 will introduce a new set of challenges but also significant opportunities. In December, The Royal Mint and The World Platinum Investment Council (WPIC) announced a partnership to release a new range of platinum investment products during 2017.

In wider economic developments, whilst Trump has almost finalised the process of selecting members for his cabinet, the impact of the Trump Presidency will only truly begin following the inauguration next year. Similarly, and more locally, the act of implementing article 50 on Brexit is still yet to materialise and developments more recently in Scotland regarding independence may have a longer reaching impact on the gold price. Equally, presidential elections will be taking place in both France and Germany which may cause volatility in markets both at home and abroad.