Flora Sandes – A Great Unsung Military Heroine
Read the personal stories of war as we commemorate the 100th Anniversary of the First World War.

Flora Sandes was born in 1876, the daughter of a Yorkshire clergyman. From a young age, it was obvious she held a different mindset to that of other Edwardian women: she enjoyed shooting and riding as a young girl and learnt to drive at the first opportunity. When she was working as a secretary, she even drove an old French racing car in her spare time. Throughout her life, her intrepid nature guided her to help others, to fight for what she believed in and her achievements shattered the public perception of what women could achieve. She was a history-maker, a pathfinder and an inspiration.

Sandes was the only British woman to officially serve as a soldier during the First World War. 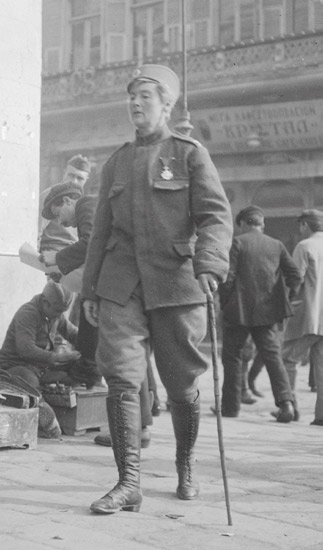 Sergeant Major Flora Sandes walks through Salonika with the aid of a stick during her rehabilitation from wounds inflicted by a Bulgarian hand grenade, January 1917.
© IWM (Documents.Q 32702)

When the First World War broke out in 1914, Sandes travelled to Serbia as part of a small nursing unit due to her being a member of the St John Ambulance Brigade. Later, she joined the Serbian Red Cross and, following the Bulgarian invasion of Serbia in October 1915, was permitted to join the 2nd Infantry Regiment as a medical dresser. The Serbian Army was slowly being driven into retreat and conditions were such that Flora drifted by successive stages from a nurse into a soldier. It was not unusual for Serbian peasant girls to fight with the army and Flora was treated as one of their own. One day she took the Red Cross badge off her arm and declared that she would, as a 'representative of England' be joining the 2nd Regiment as a private; her colonel allegedly took the brass regimental badge from his own uniform and fastened it to the shoulder strap of his new recruit.

Flora was an idol within the Serbian army, admired as an embodiment of the English pledge to help its friend Serbia. Because of her cheerful and courageous personality, she was variously referred to as ‘an up-to-date Amazon’ and ‘Serbia’s Joan of Arc.’ 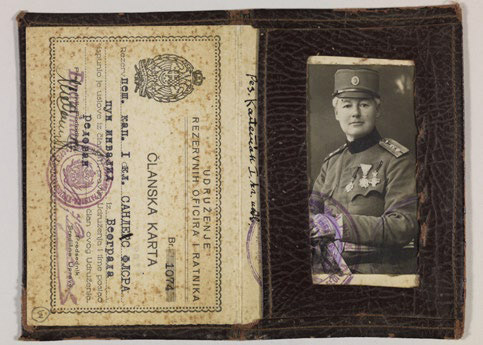 Flora spent the majority of her service at the front line until she was severely wounded by a Bulgarian grenade in November 1916. She spent two months recovering and during that time she was decorated with the Serbian Order of the Kara-George, a rare honour given for bravery in the field. After she was granted leave she travelled back home to England, raising funds for Serbian soldiers before returning to active service in May 1917. By the end of the war she was serving as a Sergeant Major but in June 1919 she was commissioned (the first woman to be promoted in this way) and, following demobilisation, received the rank of Captain.

In 1927 she married Yurie Yudenitch, a Colonel who had escaped Russia during the Revolution to fight with the Serbians in Flora’s regiment. Following the end of the Second World War, where they were interned in Belgrade, by the Germans, Flora settled back in England after her husband’s death in 1941. She lived in a small cottage in Suffolk until her death in 1956 at the age of 80.

‘’People do love to tell you you can’t do things'’

(Flora Sandes, in a lecture given whilst on a tour of Australia, 1920)