Making the change to decimal coinage

The changeover to decimal currency was no small task: the public and businesses of Britain required all the necessary information to make the changeover as smooth as possible. New coins of decimal denomination were also to be developed and struck in preparation for use. The sheer volume of coins required for that changeover meant that The Royal Mint needed to move location from Tower Hill to a new production facility. In 1968 the new Royal Mint site in Llantrisant, South Wales was opened by Her Majesty the Queen and the first of almost six billion coins required for decimalisation went into production.

The first of the new coins, the 5p and 10p, entered circulation in April 1968. They bore new heraldic designs, yet corresponded exactly in size and value to the shillings and florins and, so, were able to run easily alongside them as their ‘decimal twins’.

Not all the coins would be that familiar, though, and in 1969 the new 50p, the world’s first seven-sided coin, replaced the 10-shilling note – a very new and very different reminder of the looming changeover.

To overcome confusion during the changeover, as well as running the old and new currencies alongside each other, publicity and information campaigns were frequent.

Numerous leaflets and posters were distributed and a series of television broadcasts helped to explain the new system.

The BBC broadcast a series of five-minute programmes known as Decimal Five and ITV broadcast Granny Gets The Point, a short drama where an elderly woman was taught to use the new decimal system by her grandson. 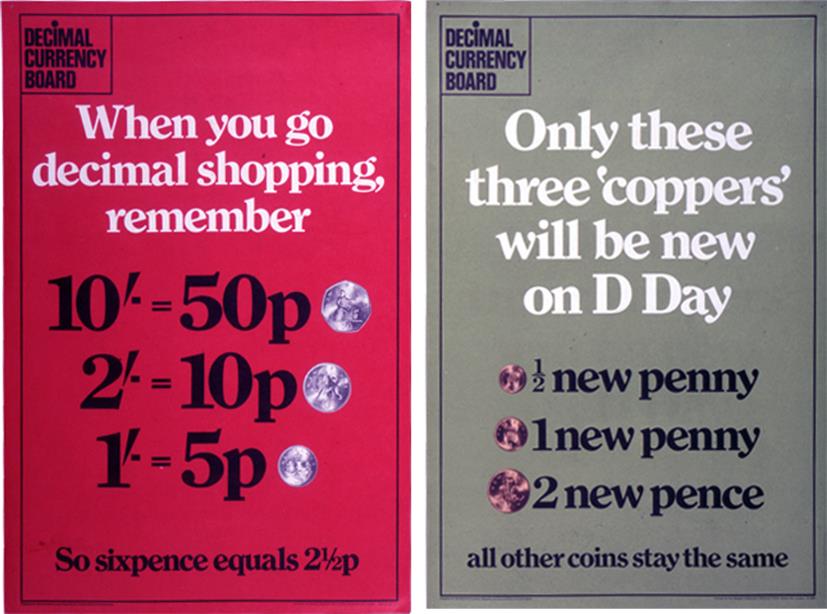 Thus, on Decimal Day itself the country was well prepared: D Day came and went, negotiated far more smoothly than anyone had ever dared to hope, and the new coins took their place in numismatic history.

Since decimalisation the coinage has been reviewed several times and has continued to evolve. The 6d was finally de-monetised in 1980 and the ½p disappeared in 1984. The 20p was introduced in 1982 and the £1 coin made its debut in 1983. The 5p and 10p were re-sized in 1990 and 1992, which meant the demise of the shilling and florins, while the smaller 50p coin entered circulation in 1997. This means that, from 1992, every coin in circulation has carried the head of the reigning monarch, something that has not happened since medieval times.

In 2008, though, 40 years after the first decimal coins entered circulation, it was time for rejuvenation. Discover the inspiration behind Matthew Dent’s new designs.