Britain’s first decimal coins were designed by the sculptor Christopher Ironside FSIA FRBS OBE. Christopher died on 13 July 1992. We asked his widow, Jean, what it was like to live through that momentous time.

The designing of the decimal coins started in 1962. No official Government announcement had been made on when to go decimal but The Royal Mint must have felt that it was likely to happen and wished to be prepared.

Sir Robin Darwin, a member of The Royal Mint Advisory Committee and Rector of the Royal College of Art, came up with a plan by which various artistic bodies, including the Royal Academy, the Royal Institute of British Architects, the Faculty of the Royal Designers for Industry and the RCA, should invite artists of their choice to submit designs for a new decimal currency.

My husband Christopher, who taught life drawing at the RCA and had designed a few medals in the past for the Mint, joined the combined RDI/RCA team which duly won the competition. 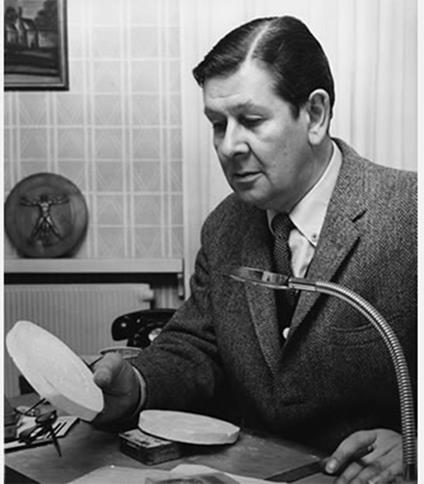 All this took place in total secrecy. Most instructions were given over the telephone – the occasional letters were marked ‘STRICTLY CONFIDENTIAL’ and Christopher was forbidden to speak to anyone. This made life rather difficult at home because in the end the secrecy was to span from 1962 to 1968.

With a teenage daughter at the top of the house, an elderly mother on the ground floor and two babies arriving in quick succession, there was little room at home for a discreet place to work. Christopher occupied one end of our drawing room, throwing a large cloth over his desk each time friends called. Plaster casts were stacked neatly out of sight on a balcony.

Our efforts at secrecy failed when after dinner one night two friends took it into their heads to stroll onto the balcony while Christopher and I were downstairs making coffee.
“You’re designing the decimals!” they cried.
“You haven’t seen a thing!” growled Christopher. “If you say anything, they will put me in the Tower!”

Another hazard of working in the living area was the children. At six o’clock one morning Kate climbed out of her cot and was discovered sitting happily at her father’s desk, digging his tools into a finished plaster. The Mint had to wait a further two days for that one. If an amended drawing or plaster was needed in a hurry for the design committee, a large Mint car would arrive and a chap in a peaked cap would solemnly bear the plaster away in a flat white box rather like a modern takeaway pizza.

In 1966 all these preparations came to a halt. The country was on the verge of a General Election and James Callaghan as Chancellor of the Exchequer had a financial statement to make.

A telephone call summoned Christopher to the Mint. The ever courteous Deputy Master, Jack James, beckoned him to a chair and silently poured out an enormous gin and tonic which he thrust into Christopher’s hands with the words,
“Drink that. Callaghan is about to announce in the House of Commons that Britain will be going decimal but he insists there must be an open competition for the designs. Everyone who wants to must have a chance to enter. So”, added Jack James sadly, “you haven’t won after all.”

A few days later, having metaphorically picked himself up, Christopher decided he had to enter the open competition and do more and better designs. Thus began months and months of work.

By this time Virginia, Christopher’s eldest daughter, had flown the nest, we had moved house and he at last had a separate workroom. All social life came to a standstill. Apart from two days teaching, which he needed for income, he worked all day, every day, producing endless versions of lions, Britannias, dragons, coats of arms, St Georges and roses. Mealtimes were devoted to discussions of fresh ideas or to heraldry.

Once when I disturbed him with a mug of tea, I was faced with 15 St Georges. Which did I like best, St George naked or with armour? Why that one and not this one?

He finally discarded hundreds of drawings and selected three sets: royal, regional and popular. Then, when I thought life could begin again, he decided there should be a fourth avant-garde set. By the entry date he was exhausted. All the designs were displayed anonymously and the Advisory Committee invited to judge.

The only thing I remember about that day was sitting in the car outside a house where a party was going on. Christopher dashed in and minutes later returned saying, “It seems I’ve got the tails”. I cannot remember if we actually went to the party in the end. The Mint, however, never actually said he had won the competition. “Your designs have been chosen for development…” was the phrase. Then the modifications began.

Designed for the public

Christopher felt strongly that coins are public property. If an artist paints a picture, the public can choose to buy it or reject it, but coins are thrust upon people and he wanted to do his utmost to make them generally acceptable. This was no time to be a prima donna.

However much he might privately like a particular design, other considerations were paramount, but it was difficult. Jack James’ right-hand man, Alan Dowling, would telephone to report the varied views of the Committee. This would lead to a rise in Christopher’s blood pressure as he was faced with a self-cancelling brief.

On one occasion he was asked to make Britannia lean back a fraction more and lift the trident forward but not to touch the lettering. Impossible. Steam came out of Christopher’s ears. Hours later, when I brought in the regulation mug of tea, the floor was covered with Britannias. “I’ve done it! Look at this,” he cried. “Not exactly what they wanted but they will never know!” And they never did.

In the end, after months of toing and froing, Christopher finally managed to attend a Royal Mint Advisory Committee meeting. I believe this had not been done before as it was feared designers would become tongue-tied in the face of an eminent gathering which included Sir Kenneth Clark, Sir Anthony Wagner and John Betjeman and which was chaired by His Royal Highness Prince Philip.

Possibly by now, The Mint realised that Christopher’s tongue was seldom tied.
He found the meetings he had with the Committee very helpful. He could pull out a pad of paper and demonstrate what happened to some of their suggestions. Thus time was saved.

One recurring problem was Garter King of Arms, who had to be satisfied with the accuracy of the heraldry. Christopher used to call on him for clearance from time to time which led to the saying in our house, ‘If only Garter could be more elastic’.

Uncertain until the end

Year in, year out, the secrecy prevailed. Christopher supposed he was now designing the coins but he did not know.

At one point, when answering the telephone to Alan Dowling, I said in desperation, “Has Christopher won or not?” He paused for a moment.
“You have grounds for great optimism but don’t run up a flag. Nothing is certain until the coins are finished and have received Royal Assent.”
This exchange sealed our affectionate later enjoyment of Sir Humphrey in the programme Yes Minister.

I recently came across an article written in 1969, in which Christopher said,
‘The work of a great many artists who are geniuses is never recognised and probably eventually disappears. But if one is a coin designer, one’s work lasts possibly long after death, everyone becomes familiar with it and it forms a small part of the history of the country for which it was designed, and one becomes famous. Not because one is a genius, or a saint or a monster, but simply because one is a coin designer.’

When our last child, a son, was born in 1968, Christopher added the name Decimus to Christian Adrian. The Deputy Master of the Mint, by now known to us as Jolly Jack, became his godfather.