na
na
We are currently updating our website to ensure all references to the Royal Family are accurate. Please bear with us while these changes take place over the coming weeks. 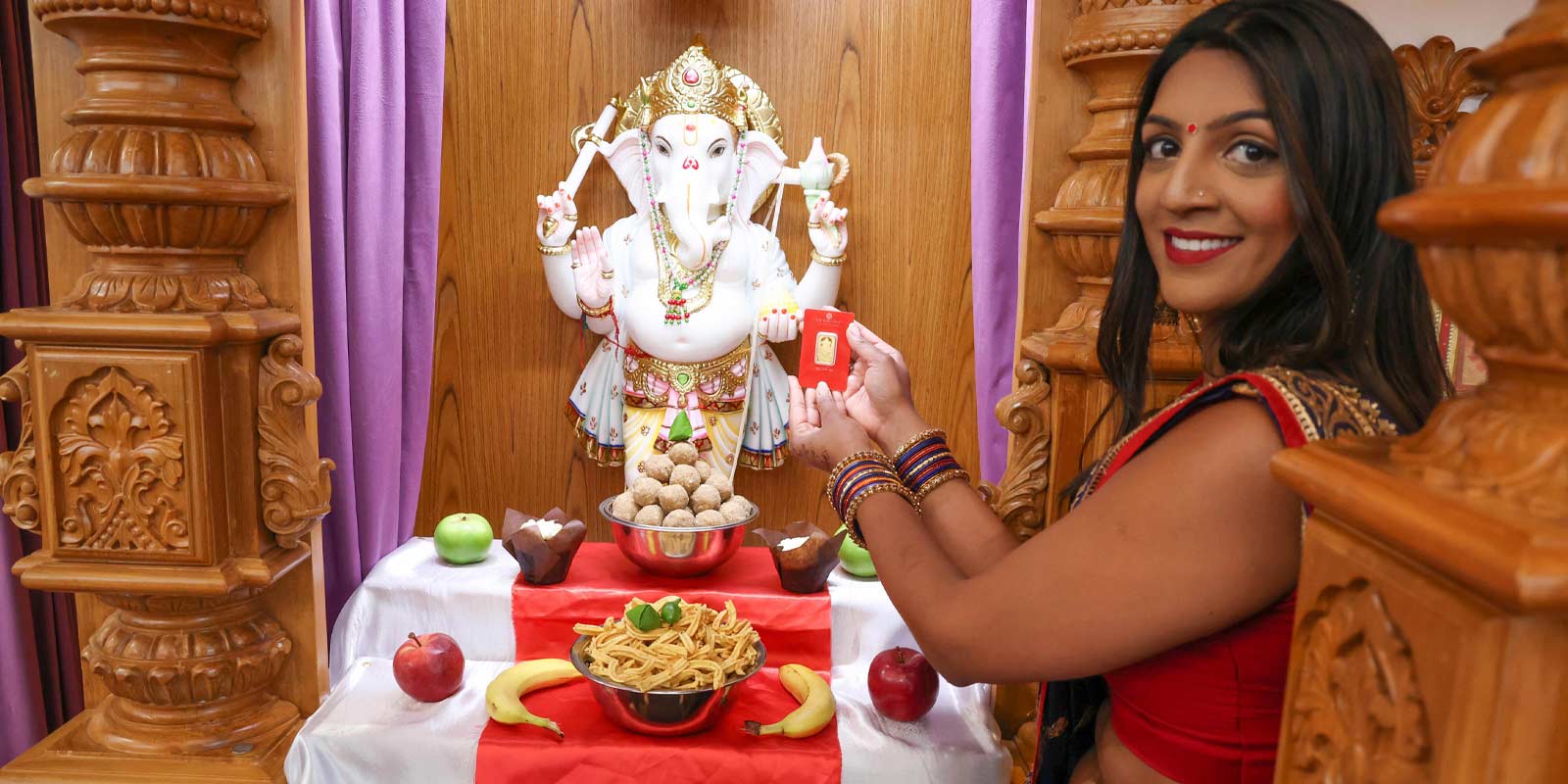 The Royal Mint has today (Wednesday 3rd August) presented the newly built Shree Swaminarayan Mandir in Oldham with two gold bars; the Lakshmi bar and the newly released Ganesh bar.  In its ongoing commitment to diversity across their product range, The Royal Mint’s Ganesh bar is the latest gold bar in the Indian-inspired series, following the Lakshmi bar that was released ahead of Diwali last year.

The Temple, located in Oldham, Greater Manchester, today opened its doors to the community for the first time for the sacred Murti Pratishta ceremony followed by the first unveiling of the deities in the altar.  Conducted by the spiritual leader of the Swaminarayan Sect - Acharya Maharajshree Koshalendra Prasadji, the deities include Ghanshyam Maharaj, Lord Swaminarayan, Hanuman & Ganesh.

Andrew Dickey, Director of Precious Metals at The Royal Mint, comments: “It is a privilege to have been invited to the Shree Swaminarayan Mandir Oldham today and we are delighted that we could offer these special gold bars to the community.  The new Temple is beautiful and being able to gift our latest Ganesh bar, as well as our more established Lakshmi bar, is a true honour.”

The temple was built because the community had outgrown the current premises, and it has taken three years to complete.  The congregation is made up of circa 450 and the design and architecture make the complex eco-friendly and sustainable, bringing together the beautiful heritage of Indian architecture blended with modern design and technology, all whilst fulfilling the spiritual needs of the community and creating a carefully thought out space for social, educational, physical health and wellbeing activities to allow the community to flourish.

Hiteshbhai Bhudia, President & devotee of Swaminarayan Mandir, comments: “Today’s ceremony is a once in a lifetime opportunity for the community in Oldham and the wider Hindu community.  The ceremony welcomed over 1500 people but also attracted a national and international audience, watching the online live stream, ensuring everyone can share in such a momentous day.  We are happy so many people could join us, including the team from The Royal Mint.  We would like to express our gratitude for their generous gift, and we’re honoured we can display one of the brand new Ganesh bars.  It is beautiful and the attention to detail is phenomenal.  We are sure our community will appreciate the beauty for years to come.”

The intricate design for the Ganesh 20g gold minted bullion bar was developed in collaboration with cultural advisor Nilesh Kabaria, who is a member of the Shree Swaminarayan Temple in Cardiff.  Nilesh, who also worked on the Lakshmi bar last year, provided The Royal Mint with a detailed brief that captured all of the essential elements required to accurately depict Ganesh, and the underlying meanings behind each component of the design. Nilesh also attended The Royal Mint to strike the first Ganesh bar earlier this month.

Andrew continues: “Following the success of the Lakshmi bar launch last year, we spoke to our customers to understand which Hindu god or goddess they would like to see appear next on a gold bar. Ganesh proved a clear favourite, and so all effort was made to honour the ‘Lord of Beginnings’ on a new 20g gold minted bullion bar. We also felt it important that the Ganesh bar was available to our customers to invest in and celebrate Ganesh Chaturthi with this August.  We have worked closely with Nilesh to ensure accuracy and cultural authenticity in design, to develop a product that incorporates both beauty and tradition, but with a modern twist.”

Last year, the Lakshmi bar sold out within the first week of going on sale, with a second run of bars following closely after to satisfy customer demand.  Dhanteras saw the highest sales of Lakshmi bars in a single day.

With gold being a traditional and auspicious gift during the Diwali festival, The Royal Mint’s Indian-inspired range aims to combine the intrinsic value and importance of gold with time-honoured traditions.

Supporting information on the build of the temple can be found here - New Mandir Project | Shree Swaminarayan Mandir Oldham (oldhammandir.faith)