Behind the Design with Jody Clark

Jody Clark, the designer behind The Queen's Beasts Collection, shares his inspiration for the White Lion of Mortimer.

While the story of The Royal Mint’s past is peppered with grand, mature and characterful engravers, a new generation of coin designers is making an impression on the minting world.

Royal Mint designer Jody Clark is one such talent, combining ancient craft with modern methods. Already creator of the world-famous fifth portrait of Her Majesty The Queen, which appears on the obverse of United Kingdom coins, at just 38 Jody has several impressive designs to his name.

Most recently, the artist has turned his attention to The Queen’s Beasts Collection, creating ten original designs, exclusive to The Royal Mint. Each lends a contemporary interpretation to the majestic subject of heraldry, legend and legacy and celebrates Queen Elizabeth II’s remarkable reign.

For the eighth coin in the series, Jody has captured the White Lion of Mortimer standing beside a shield bearing the distinctive white rose of the House of York. It stands without a crown and its front claws are retracted but it maintains a sense of power and dignity.

“I wanted to create a strong silhouette around the White Lion, accentuating the prominent features of its tail, mane and the shield it is holding," Jody explains. "The lion faces to the right, like Her Majesty The Queen on the obverse, signifying the royal ancestry and history of monarchy that it represents.

“This lion is presented in a different composition to the Lion of England which faces head-on, ferocious and rampant. It was important that the lions were portrayed this way as they embody distinct and contrasting aspects of the history of the monarchy.” 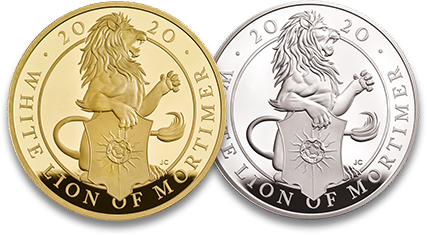