Behind the Design with David Knapton

The second coin in our fascinating Innovation in Science series features Rosalind Franklin, a scientist whose groundbreaking research led to breakthroughs in multiple fields.

Best known today for her work on DNA, at the time her contribution to perhaps the greatest scientific breakthrough of the twentieth century wasn’t properly acknowledged; something that Royal Mint graphic designer David Knapton was keen to address. A longstanding member of the creative team with an impressive body of work to his name, we caught up with David to find out more about the inspiration behind his design.

How does this coin differ from your other designs?

“I have created designs for the Paddington 50p coin series, the 2020 Team GB 50p coin and worked collaboratively with The Royal Mint design team on the A-Z 10p coins. This coin followed a similar design process and after the initial research, I start to sketch up rough ideas, taking care to look at a wide range of sources for inspiration. As a graphic designer, I lean towards strong shapes, lines and a structured composition defined by grids, so this design fitted my usual way of working perfectly. Previous coins I have worked on have been somewhat busier than this design, so it was great to go with a more minimal aesthetic.”

How did you go about designing the coin? What did you do to research?

“The research was challenging and extensive. I had to get a feel for the science behind DNA and its molecular structure, understand Photograph 51, and read up on Rosalind Franklin’s life and other scientific achievements. I really enjoy visiting science museums and love how the exhibits make science fun and accessible – this is something I wanted to incorporate into the design. Some of the visuals that appeared in my submitted designs were parts of microscopes, repeat patterns of DNA strands and bold typography.”

“The design went through several iterations and I tried different options for the positioning of the text in an effort to bring in an element of discovery. I’ve included Rosalind Franklin’s name to right a historical wrong as she wasn’t given the credit she was rightfully due when her research helped James Watson and Francis Crick model the double helix structure of DNA. I added the ‘A’ after the stacked last letters of her name to ensure the image of the coin is associated with DNA.” 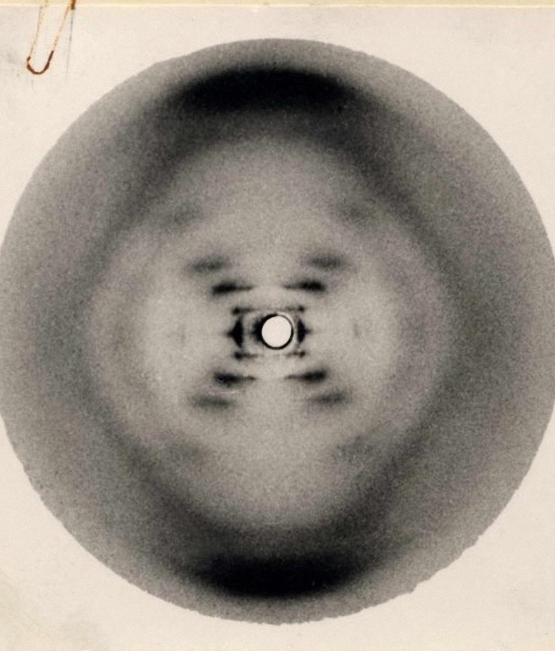 “In addition to the coin I have also worked on the packaging and campaign which has been a great opportunity to include some additional information on DNA which would have been impossible to feature on the coin.”

What was your inspiration for the selected design?

“I’ve always been interested in science and technology, so this was a fascinating theme to research, but I quickly realised how complex the whole subject of DNA is – certainly far beyond my GSCE level grasp of biology! It blows my mind to think the structure of molecules and atoms in DNA that make up a living thing are the building blocks to life. Working my way through the subject matter helped me to crystallise my thoughts; I felt I should create a design portraying the capture of Photograph 51 in the clearest way possible whilst making a feature of Rosalind Franklin’s name.”

Talk us through the different elements of the coin.

“The main element of the design is a graphic representation of Photograph 51. I have created this in a halftone technique to reflect printing techniques from the 1950s, the era that the image dates from. I created the one quarter of the design and reflected it over the X and Y axis to create a clear image which you can see when you hold the coin at a distance. But on closer inspection you can see the individual dots much like DNA.”

What were your biggest challenges in approaching this design?

“As with any coin design it can be a challenge representing a complex theme on such a small canvas. Some of my other submissions would have been too detailed, so the design had to be revised to reduce the number of dots in the halftone pattern. A grainy image like Photograph 51 wouldn’t translate well if it was replicated directly. Another consideration was to ensure the design provided a sense of continuity as part of the Innovation in Science coin series. The previous coin featuring Stephen Hawking was very visual and used typography that merged into the design, so I felt this is something that should be continued to help tie the series together.”

How did you feel when you saw the coin for the first time?

“It’s always exciting seeing a final coin that has gone through many artistic and technical processes in the palm of your hand. We live in a throwaway culture, so producing something lasting that will be held in coin collections for many years to come is a great feeling. Having my design chosen to commemorate one of British science’s greatest figures is something I’m hugely proud of.”