Pioneer of Science, Master of Minting

In 2017, an official UK 50p coin celebrated Sir Isaac Newton. Here you can learn more about our most famous Master of the Mint, and the award-winning design that has been created in his honour.

When Sir Isaac Newton came to The Royal Mint Britain's finances were approaching crisis, with up to one in ten circulating coins believed to be forged. His vision of matchless quality led him to root out and prosecute notorious counterfeiters, improve assaying techniques (the way coin quality is checked), and refine weights and measures to standards never seen before. In 1699 Newton became Master of the Mint. After overseeing the new coinage for the accession of Queen Anne in 1702 he also supervised the huge task of bringing Scottish coinage into line with English coinage, following the Union of England and Scotland in 1707. Thanks to Newton’s vision, Royal Mint coins remain unrivalled in their accuracy and purity to this day.

Sir Isaac Newton was born in Woolsthorpe, Lincolnshire, on 25 December 1642. At this time England was a chaotic and turbulent country, torn apart by civil war, religious unrest and the threat of plague. When Newton became a student at Trinity College, Cambridge, in 1661, undergraduates still studied the work of ancient authors such as Aristotle and Plato. However, by this time, their doctrines were being seriously questioned by inquisitive minds like the young Isaac.

Although Newton initially studied the work of these great figures he was one of a new breed of ‘natural philosophers’ whose approach to science was defined by the use of rigorous experimentation and mathematics. His work was built on the belief that: “Plato is my friend, Aristotle is my friend but my greatest friend is truth.”

A Scientific Quest for Accuracy

“The proper method of inquiring after the properties of things is to deduce them from experiments.”

From 1696 until his death in 1727, Newton was first Warden and then Master of the Mint. He applied his scientific precision to the task of improving the accuracy of the coinage, making it difficult for counterfeiters

Newton also took it upon himself to bring these criminals to justice, often rooting out and prosecuting them himself. This quest brought him into contact with many criminals. One being the notorious counterfeiter William Chaloner, who eventually paid the price for underestimating the Warden when he was put on trial, found guilty and hanged

In 1717 he was commissioned to produce a report ‘On the State of the Gold and Silver Coin’. This effectively fixed the value of the guinea at twenty-one shillings and marked an important step towards the eventual adoption of the Gold Standard.

This, in turn, led to the re-introduction of The Sovereign, which has gone on to celebrate 200 years as one of the world’s most iconic and best-loved coins.

Newton endeavoured to make all coins made at The Royal Mint as accurate and reliable as possible, reducing variances to such a degree that The Royal Mint would be beyond criticism. His dedication to accurate coin production and scrupulous scientific testing meant that coins made by The Royal Mint became the most respected in the world. It is a reputation we are proud to maintain to this day.

He refused to accept any criticism on the quality of his coins, as shown by his reaction at the Trial of the Pyx in 1710. This ceremony sees an independent jury weigh and assay a selection of Royal Mint coins. When it was reported that The Royal Mint gold coins were not quite as they should have been, Newton flew into a rage. He insisted the coins were not at fault and questioned the standard trial plate they were being measured against. Newton proved his point and the faulty plate was quickly abandoned.

Meet Aaron West, the designer behind this original design.

The reverse of the Sir Isaac Newton 2017 UK 50p Coin was created by Aaron West, a member of The Royal Mint’s own graphic design team; a fitting tribute for the most famous Master of the Mint.

Aaron achieved a degree in Graphic Design, and a PGCE in Higher Education, from

the University of South Wales before working in retail advertising, graphic

design and teaching. This is Aaron's second commemorative UK coin design. He also captured the chaos of the Great Fire of London on the coin struck in 2016, which marked the 350th anniversary of the disaster.

His award-winning design was voted the 2017 Coin Design of the Year. It is based upon elements of Proposition 11 in Book One of Newton's Principia Mathematica. The sun lies at the common focal point of three ellipses representing the orbits of different planets. 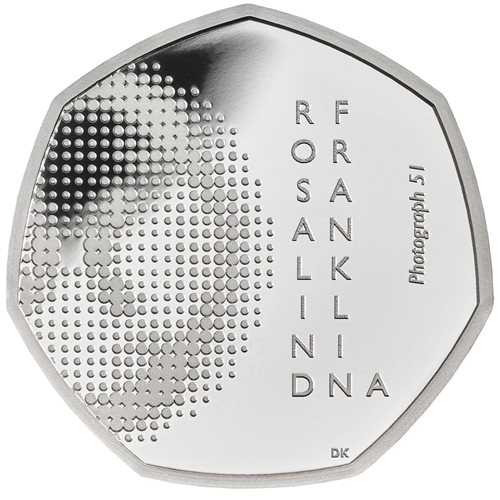 Rosalind Franklin’s brilliant mind and tireless dedication enabled breakthroughs in multiple fields. Best known today for her research into DNA, Franklin was a world authority on the chemical structure of viruses, as well as coal and graphite. 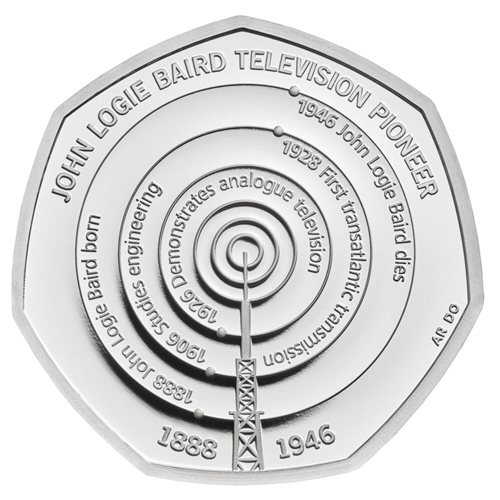 Pay homage to one of the greatest inventors of the twentieth century with the latest addition to the Innovation in Science series.