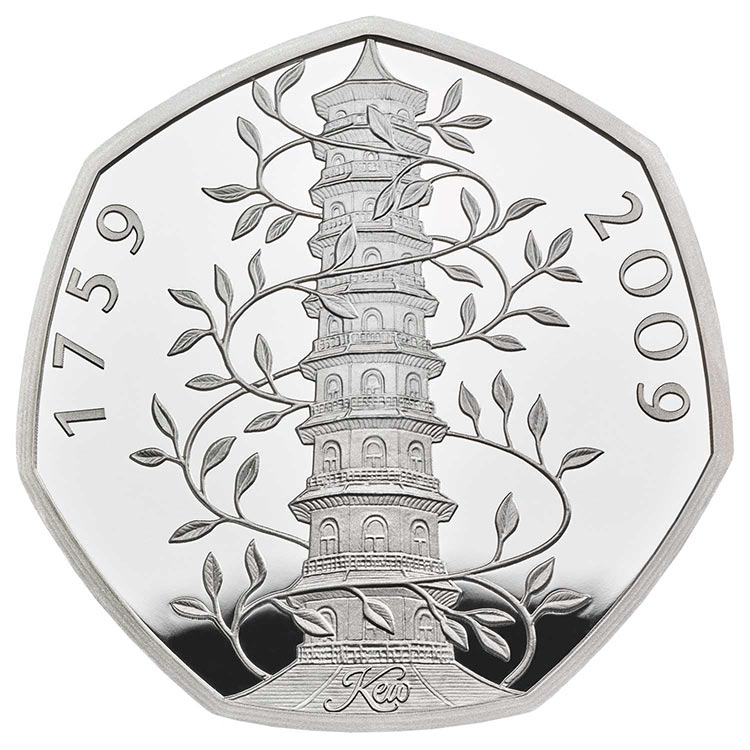 If you were to ask collectors which coin got them started, the chances are it was the 50p.

Over the years, the coin has been issued in a huge range of commemorative editions celebrating every aspect of British culture, from athletes to authors. The sheer variety has sparked a collecting craze but of all the 50p coins, the Kew Gardens 50p is arguably the most sought-after. Nothing gets people excited quite like this original 2009 design. Just 210,000 were released into circulation and with almost all of them in private hands, the chances of coming across one in your change are slim.

The venerable institution depicted on the Kew Gardens 50p coin is the nation’s most famous royal botanical garden. The reverse design, created by Christopher Le Brun RA, features the famous Chinese Pagoda at Kew with a decorative leafy climber twining in and around the tower. Demand for the 50p denomination was not high at the time of release into circulation which explains the low mintage of this particular design.

The issue of a 2019 year-dated Proof coin as part of the 50p celebration sets comes ten years after the initial launch of the Kew Gardens 50p and soon after a major renovation of the pagoda at Kew, restoring it to its former glory. Originally adorned by wooden dragons, these mythical beasts have returned to grace the tower once more. Britain’s first skyscraper looks set to see out another 250 years in style.

The 2019 version bears a different effigy of Her Majesty The Queen than the original 2009 version and of course, features the 2019 mintage date, but the Kew Gardens 50p design remains as iconic as ever. While this reissue gives collectors a chance to own a 2019-dated version of this sought-after design, it takes nothing away from the original circulating coin for anyone lucky enough to own one.