History of the Sovereign

The History of the Gold Sovereign

The very first gold Sovereign was struck during Henry VII’s reign. On 28th October 1489, the king ordered the officers of his Royal Mint to produce “A new money of gold.”

Up to that point, gold coins had been in circulation for over a hundred years, so the Sovereign certainly wasn’t the first gold coin to be minted in England. It was, however, the largest and most valuable ever seen at that time. On the obverse of the coin there was a portrait of Henry VII on his throne, wearing his coronation gown. The royal arms featured on the reverse, with a magnificent double rose that symbolised the union of York and Lancaster after the Wars of the Roses.

The first Sovereign, with its double rose showing the union of York and Lancaster.

This large, handsome coin clearly sent out a message of stability and prestige after the turmoil of the wars. Succeeding monarchs all chose to strike new versions of the Sovereign themselves, indicating their own power and strength. It wasn’t until the reign of James I, crowned King of England and Scotland in 1603, that the practice died out.

The return of the Sovereign

After Napoleon was defeated at the Battle of Waterloo in 1815, the authorities carried out a review of the nation’s coinage. At first it was intended to re-introduce the 21 shilling guinea but it was found that, “A very general wish prevails among the Public in favour of a Coinage of Gold Pieces of the value of Twenty Shillings and Ten Shillings, in preference to Guineas, Half Guineas and Seven Shilling Pieces.” Hence a new gold 20 shilling coin was born and given the old name of Sovereign.

The new gold coin of 1817 was almost half the weight and diameter of the original Sovereign, but it was equally as beautiful. The reverse featured an image of St George and the dragon that had been designed by one of the most celebrated gem engravers in the world, Benedetto Pistrucci. 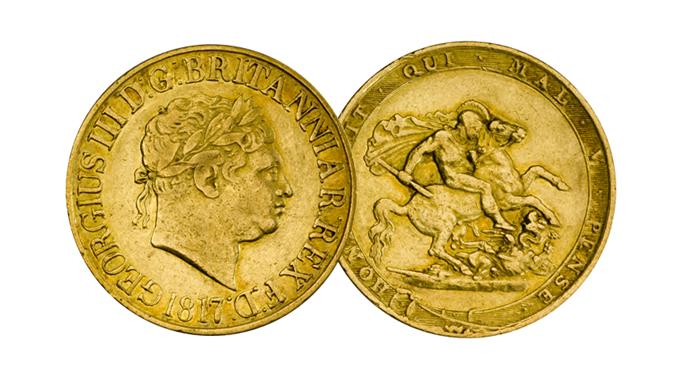 The king’s portrait on the 1817 gold Sovereign was also the work of Benedetto Pistrucci.

In 1825 the image of St George was replaced with a more conventional image of the royal coat of arms. After people criticised the poor state of the coin designs, the St George design was reinstated during Queen Victoria’s reign. From 1871 onwards, the Saint and the dragon appeared on the reverse alongside a shield design, both of which bore an image of the young Queen Victoria on the obverse.

Queen Victoria’s Golden Jubilee took place in 1887, when new designs were unveiled for the gold and silver coins. Once more, Pistrucci’s St George was chosen for the reverse of The Sovereign, it being “Sanctioned,” said the Chancellor of the Exchequer, “by tradition and recommended by the great beauty of the design.”

It was not until 1893, however, when Thomas Brock’s old head replaced the Jubilee head on Queen Victoria’s coins, that Pistrucci’s St George finally graced the reverse of the Half-Sovereign. There may have been practical reasons for adopting St George in place of the usual royal arms, but aesthetic considerations surely also played a part. The general admiration of Pistrucci’s design led one critic in the London Illustrated News to declare that the new Half-Sovereign of 1893 was “Vastly pretty… by far the most artistic Half-Sovereign I have yet seen.” 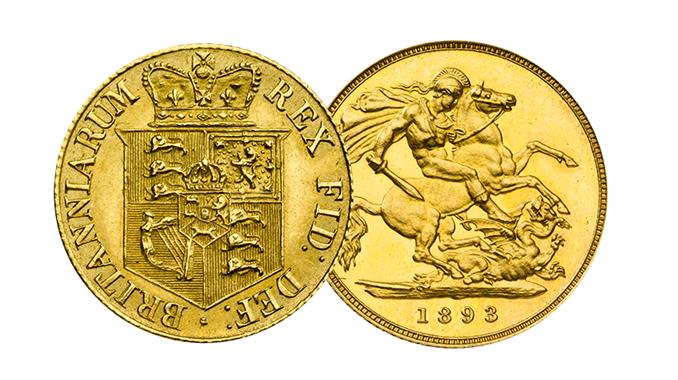 Pistrucci’s design has appeared on the Sovereigns of every monarch since Victoria’s reign. It has featured on every bullion Sovereign of the twentieth century apart from five special occasions, including Her Majesty The Queen’s Golden Jubilee year in 2002 and the 200th anniversary of the modern Sovereign itself in 2017.

Pistrucci’s St George and the dragon continues to reign supreme in the gold Sovereign family, representing the highest standards of the coin maker’s art. It graces all five coins in the Sovereign family. Each one has been manufactured using the original master tools, which means they truly display Pistrucci’s dynamic masterpiece in all its original glory. 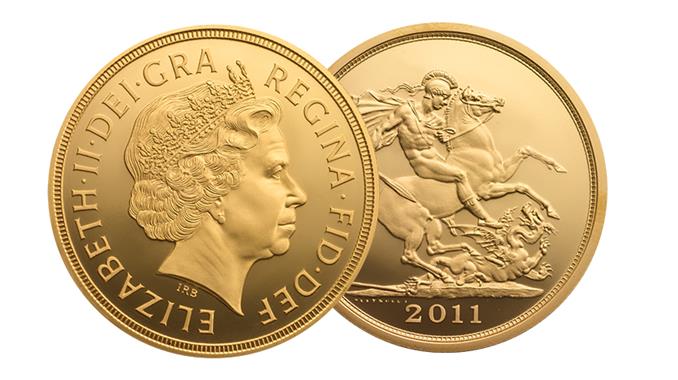 The latest chapter in our flagship coin’s enduring story

Our eagerly awaited flagship coin marks a unique moment in royal and British history. The Sovereign has marked many important moments for Her Majesty The Queen throughout the years, and now, in 2021, the coin of the monarch features two special elements in celebration of Her Majesty The Queen’s 95th birthday. A unique privy mark appears on the classic golden coin, and its milled edge has precisely 95 mills, each symbolising a year of The Queen’s life.