A new design for the nation’s coins

A new design for the nation’s coins

The first decimal coins that appeared in the United Kingdom back in 1968 were a well-loved representation of British heritage at that time. 40 years later, in 2008, we wanted to update the coins with a fresh set of designs.

The process began with a competition. The Royal Mint asked people to submit designs for the six coins that could stand alone or work as a set. We were looking for designs that would symbolise Britain, perhaps by using traditional heraldry, though designers were free to explore all options.

As well as inviting specially chosen artists and coin designers to submit designs, we also opened the competition out to the general public. People were invited to send in their designs for six coins: the 1p, 2p, 5p, 10p, 20p and 50p pieces. The £1 was initially left out of the competition.

The response was overwhelming. People of all ages and from all sections of society entered and we received over 4,000 designs from over 500 people. At the time it was the largest response The Royal Mint had ever received for a public design competition.

The Royal Mint Advisory Committee carefully examined every competition entry, looking for a set of designs that symbolised Britain while being contemporary. After a year of meetings and discussions, a clear winner emerged.

The winning set was designed by Matthew Dent, who had seen the competition advertised in a newspaper. He had explored a number of ideas before finally developing a heraldic set.

“I felt that the solution to The Royal Mint’s brief lay in a united design,” he explained. “United in terms of theme, execution and coverage over the surface of the coins.”

Initially, Matthew experimented with ideas about birds, plants, buildings and coastal scenery. The challenge for him was sharing the four nations over six coins. He initially thought that a landscape might solve the problem, with the landscape stretching off an edge of one coin and appearing on the other.

Matthew also thought about linking the coins through heraldry. Perhaps the six coins could make up a shield when arranged horizontally and vertically. The idea worked. “This piecing together of the elements of the Royal Arms to form one design had a satisfying symbolism – of uniting the four countries of Britain under a single monarch,” he said.

One final piece of the jigsaw

As the committee discussed Matthew’s designs, they felt that the designs needed one, final piece to bring the set together as a unit. It became clear that the £1 coin should be part of the new designs.

The results are plain to see for anyone who uses the latest British coins: a set of designs that is firmly rooted in tradition yet with a beautifully contemporary feel. 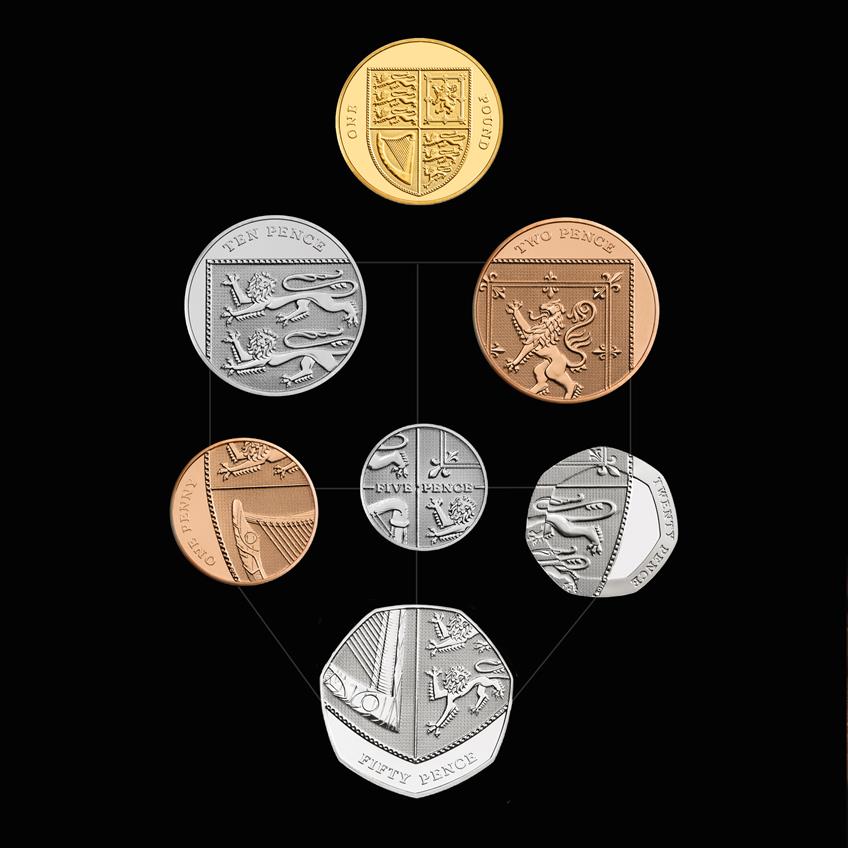