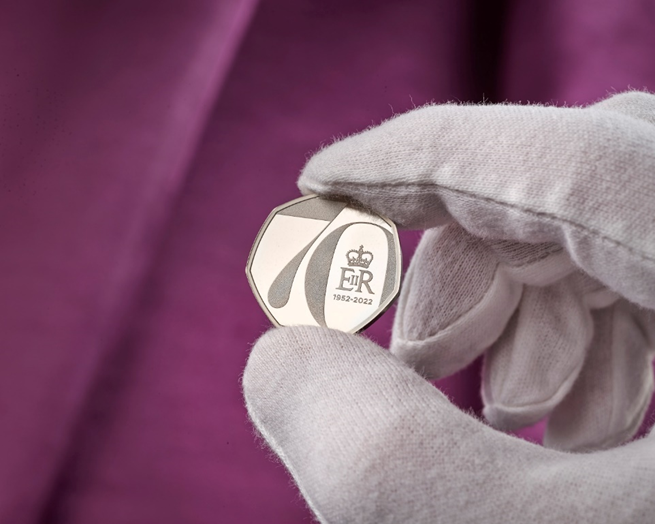 The Royal Mint has unveiled the design of a new 50p which will be issued in 2022 to celebrate Her Majesty the Queen’s Platinum Jubilee. It is the first time that a royal event has been celebrated on the tails side of a fifty pence, with a design that has been personally approved by the Queen.

Trusted by monarchs for 1,100 years, The Royal Mint has struck circulating coins for the Queen throughout her reign and celebrated royal milestones, including the Silver, Gold and Diamond Jubilees, on a collection of commemorative crown pieces. The unique Platinum Jubilee 50p is a fitting tribute to a remarkable reign and will be available as a collectable coin in early 2022.

Marking 70 days to go until the anniversary of the Queen’s accession to the throne in 1952, The Royal Mint has unveiled imagery of the new design. The coin will feature the number 70, representing the number of years on the throne, and the Queen’s cypher framed within the zero, at the heart of the design.

“The Royal Mint has a proud history of striking coins for British monarchs and 2022 sees one of the greatest celebrations of Her Majesty the Queen with the upcoming Platinum Jubilee.

“Marking 70 days until the anniversary of the Queen’s Accession to the throne, The Royal Mint is delighted to reveal the commemorative Platinum Jubilee 50p design ahead of its launch in the new year.

“In recognition of the landmark occasion, this is the first time a royal milestone has been commemorated on a 50p coin and is a fitting celebration for Britain’s longest reigning monarch.”

New and current collectors can register their interest now for the Platinum Jubilee 50p, which will feature a special commemorative obverse design, at The Royal Mint.

The bespoke Platinum Jubilee obverse will be unveiled in 2022 across one of the largest collections made by The Royal Mint, which will also include a commemorative £5 crown.