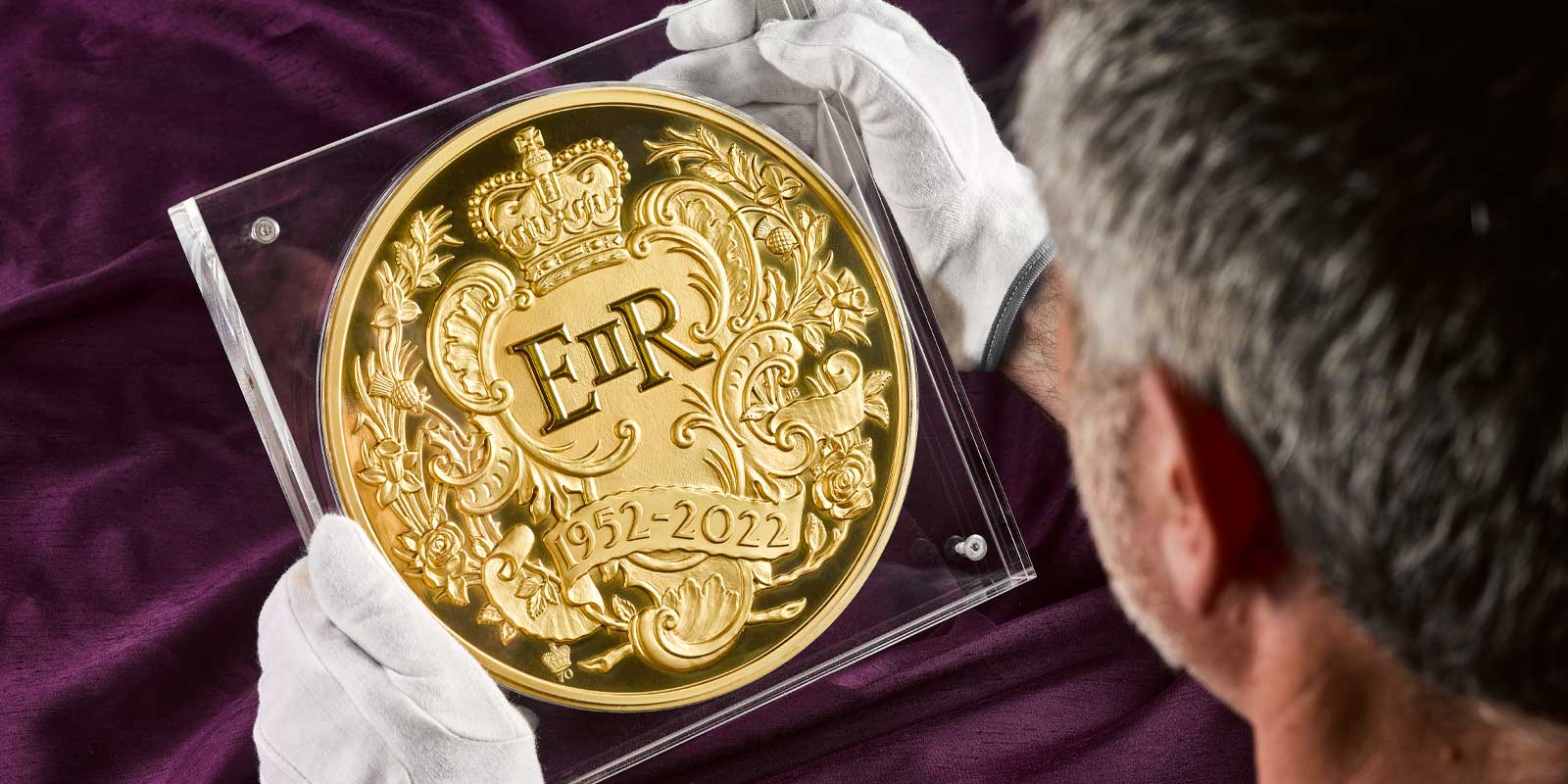 The Royal Mint has produced its largest-ever coin in celebration of Her Majesty The Queen’s Platinum Jubilee – a unique 15-kilogram gold masterpiece commissioned by a private UK collector in recognition of Her Majesty’s historic 70-year reign. The coin, with a diameter of 220mm, is made of fine gold and has been hand-crafted to the highest standard, featuring a special-edition commemorative design on both sides that have been personally approved by The Queen.

The Royal Mint’s special release was designed by esteemed coinage artist John Bergdahl featuring a regal design befitting the longest-reigning monarch in British history. The reverse side depicts a crowned EIIR cypher surrounded by roses, daffodils, thistles and shamrocks, representing the United Kingdom. Adding original features to The Royal Mint’s largest coin, the reverse design includes a symbolic privy mark of the St Edward’s Crown worn during her coronation in 1953, positioned above the number ‘70’, in recognition of Her Majesty’s momentous celebration. 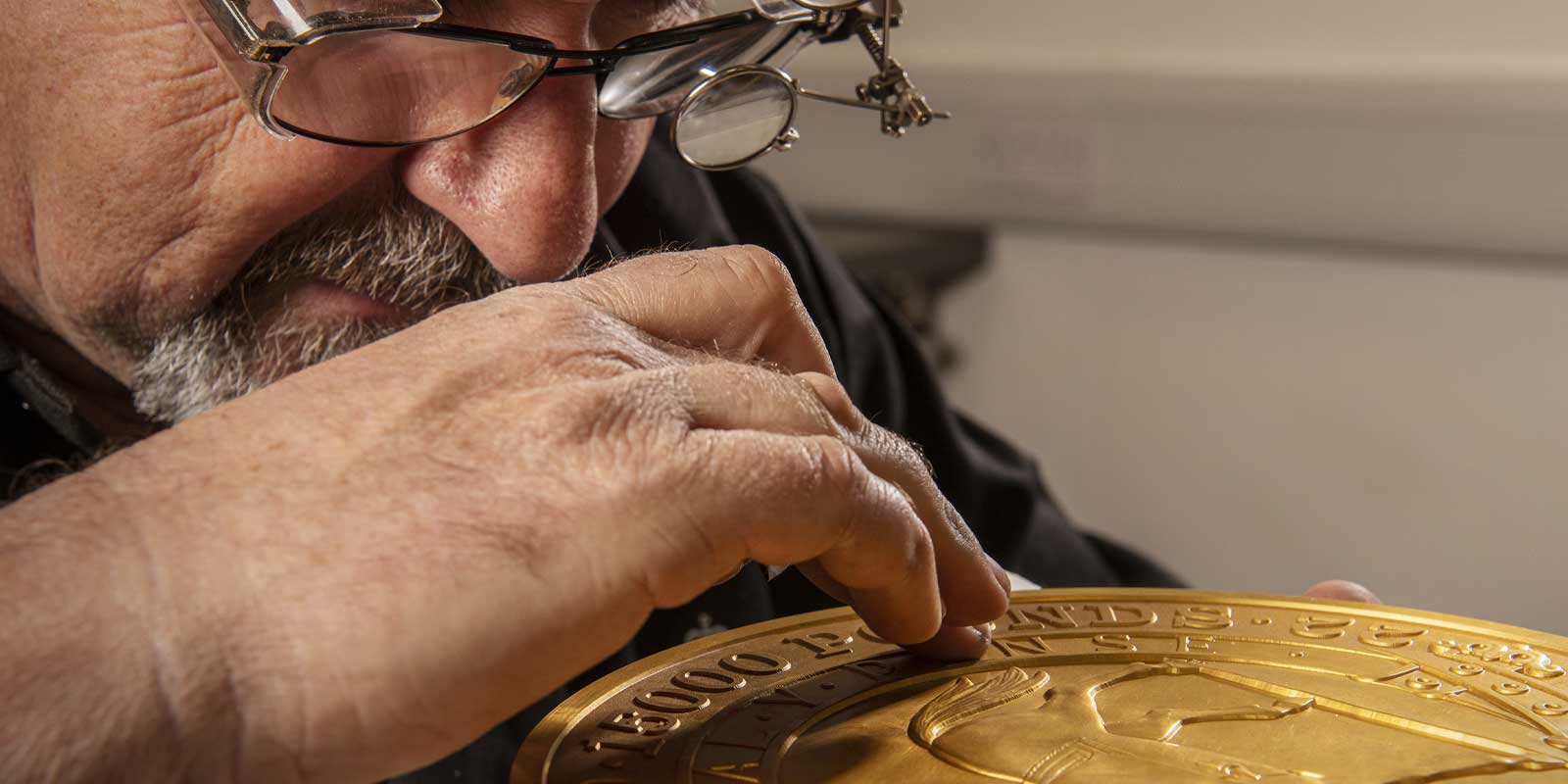 On the obverse side of the coin, a special commemorative design depicting The Queen on horseback is engraved on the precious metal. Inspired by the 1953 coronation crown coin created by Gilbert Ledward RA and the 2002 Golden Jubilee crown by Ian Rank-Broadley FRBS, the equestrian design has been created especially for the commemorative Platinum Jubilee collection, available from £7, at The Royal Mint.

As the trusted maker of coins for 1,100 years, The Royal Mint’s heritage of commemorating special people, anniversaries and events on precious metals is attracting new collectors and investors looking for bespoke and limited-edition pieces of art. The commemorative designs are brought to life by specialist craftspeople at The Royal Mint’s site in Llantrisant, South Wales, championing British minting skills and innovation.

The making of the Platinum Jubilee of Her Majesty The Queen’s 15 kilo gold coin required almost 400 hours of craftsmanship and refinement, and state-of-the-art engraving and laser technology. Rather than being struck between two dies like a standard coin, the rare large coins are cut into a solid gold ingot by a high-speed precision milling machine before the processes of burnishing, polishing, and frosting are carried out by hand to highlight key elements within the designs.

Clare Maclennan, Divisional Director of Commemorative Coin at The Royal Mint said: “This special-edition coin made of 15kilograms of fine gold is the masterpiece in the Platinum Jubilee collection, combining the finest craftsmanship and innovation rooted in our heritage as the original maker of coins for the monarchs and in celebration of Her Royal Majesty’s momentous 70 years on the throne. The largest coin ever made by The Royal Mint, it is a unique piece of art that will endure as a legacy of the occasion for generations to come. The one-off piece, commissioned by a private collector, represents our growth as the home of precious metals in the UK, making metals precious to our customers across all our collections.”

The private UK collector, and owner of the commemorative Platinum Jubilee of Her Majesty The Queen 15 kilogram gold coin, said: “As a long-standing customer of The Royal Mint, I have invested in unique and interesting coins marking moments throughout The Queen’s reign that will remain in my family for generations. The latest and greatest in my collection is the Platinum Jubilee coin, designed by John Bergdahl and brought to life in 15 kilograms of solid gold. The beautiful design stands apart as a fitting tribute to Her Majesty’s service to our nation and the craftsmanship is simply breath-taking, ensuring a once-in-a-lifetime moment will live on in history on UK coin.”

Paul Morgan, Technical Manager at The Royal Mint, added: “As the largest UK coin to date, the scale and diameter of the piece has allowed us to push the boundaries of minting to produce an exceptional level of relief and detail. It is a true testament to the expertise and skills of our in-house design and production teams, and their ability to collaborate with the finest artists. The combination of traditional craftsmanship and modern technology has produced a truly one-of-a-kind piece of art.”

The Royal Mint has told the story of The Queen’s reign on UK coins since her accession to the throne in 1952, including five definitive portraits of Her Majesty and marking royal milestones such as previous Jubilee occasions on commemorative crown pieces.

For The Queen’s Platinum Jubilee, The Royal Mint launched one of the largest ever commemorative collections, including a traditional £5 crown and the first Royalty themed 50p. The best-selling collection has been popular with new and existing collectors in the UK and overseas, with most of the precious metal 50p and £5 coins selling out at The Royal Mint website on the day of the launch.

In special recognition of the national celebration, 1.3 million 50p coins entered circulation to mark the anniversary of The Queen’s accession to the throne, with a limited mintage of 5,000,070. The commemorative 50p is also being gifted to 7,000 children completing the RFS Junior Forester Award in partnership with The Queen’s Green Canopy. Visitors to The Royal Mint Experience in South Wales, on the site where the coins are minted, can enjoy a special exhibition honouring The Queen’s reign.

The Platinum Jubilee collection is available at The Royal Mint website. Find out more about how to speak to a Specialist about the bespoke commissioning service and limited-edition premium range at The Royal Mint | Made To Appreciate.