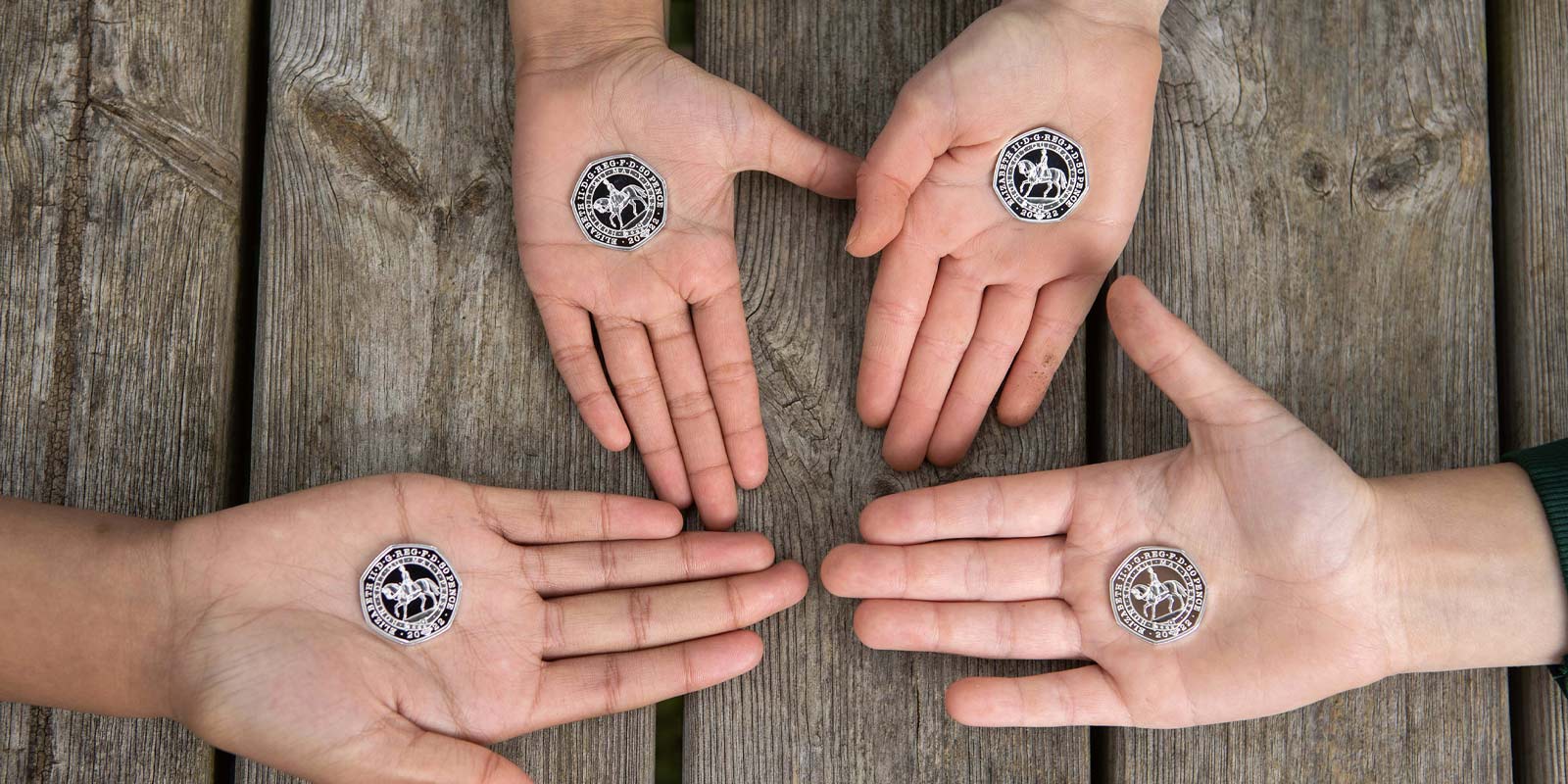 The Royal Mint has unveiled a unique commemorative portrait of Her Majesty The Queen for the launch of the Platinum Jubilee coin collection, and the first collectable UK 50p to celebrate a Royal event.

Marking 70 years on the throne, the special obverse design, by esteemed artist John Bergdahl, depicts The Queen on horseback and will be struck on the ‘heads’ side of a new 50p and traditional £5 crown.

Representing Her Majesty’s fondness of nature, the design is reminiscent of the equestrian designs for the 1953 Coronation and 2002 Jubilee crown pieces and has been personally approved by The Queen.

The collectable 50p baring the new obverse design – and featuring the number 70 along with The Queen’s cypher designed by Osborne Ross on the opposite side – will be available today from £7 at The Royal Mint.

As part of the celebrations for Her Majesty’s Jubilee, The Royal Mint is gifting 7,000 coins to children who complete the special Jubilee edition of The Queen’s Green Canopy RFS Junior Forester Award, which aims to inspire young people to learn about the benefit of trees and assist in woodland management in their local community.

Junior foresters from Saltford C of E Primary School in Bristol joined in the launch of the new Platinum Jubilee 50p, showcasing the enduring memento of the occasion in the palm of their hands that will be cherished for generations.

The Royal Mint’s Divisional Director of Commemorative Coin Clare Maclennan said: “The Platinum Jubilee is an historic occasion and one that is particularly special for The Royal Mint, as the original maker of British Coins for 1,100 years.

“In celebration of this landmark event, the official Platinum Jubilee collection, including the new 50p and traditional £5 crown, features a unique commemorative design on both sides of the coin. Designed by esteemed artists and made with original craftsmanship, Her Majesty’s Platinum Jubilee coins are enduring pieces of art that will be collected, cherished and passed down for generations.

“From today, the Platinum Jubilee 50p is available from £7, commemorating a remarkable 70 years on the throne. We are also working closely with The Queen’s Green Canopy RFS Junior Forester Award to gift 7,000 coins to children showing their support for the environmental initiative close to The Queen’s heart; and marking the moment with their own piece of history on UK coin.”

The Royal Mint has told the story of Britain’s longest serving monarch on UK coins since her accession to the throne in 1952. Royal Mint Museum Historian Chris Barker added: “The Queen’s legacy on coins stretches the length of her momentous reign, with The Royal Mint striking five definitive portraits of Her Majesty on official UK coin and celebrating previous Jubilees. The 1977 Silver Jubilee crown was the first major UK commemorative coin produced at The Royal Mint’s Llantrisant home, after the minting in London ceased in 1975. Roughly thirty-seven million coins were produced at that time, and thousands were gifted to children across the UK as a memento of the occasion. Today’s launch marks another significant milestone, and The Royal Mint plays a proud part in the nationwide celebrations.”

Dan Rex, CEO, The Queen's Green Canopy, said: “The Queen’s Green Canopy is honoured to accept this generous and unique gift from The Royal Mint which will be awarded to children from across the nation who complete the special QGC Jubilee Edition of the RFS Junior Forester Award. As the future custodians of the UK’s green spaces, forests and woodlands, this historic coin, which celebrates Her Majesty’s fondness for nature, is a fitting memento for young people participating in The Queen’s Green Canopy – a unique tree planting initiative created to mark Her Majesty’s Platinum Jubilee.”

This is the first chance for collectors to own an individual 50p piece and £5 crown featuring the special equestrian obverse design, in a range of precious metal finishes. The 50p, designed by Osborne Ross, and £5, which features a heraldic design by John Bergdahl, launched earlier this week with the definitive Jody Clark portrait of the Queen in The Royal Mint’s 2022 Annual Set.

View the full Platinum Jubilee collection, including limited-edition coins featuring a crowned depiction of the Royal Cypher surrounded by the floral emblems of the United Kingdom, at The Royal Mint.

The Platinum Jubilee of Her Majesty The Queen 2022 UK 50p

The Platinum Jubilee of Her Majesty The Queen 2022 UK £5

About The Queen’s Green Canopy

The Queen’s Green Canopy (QGC) is a unique tree planting initiative created to mark Her Majesty’s Platinum Jubilee in 2022 which invites people from across the United Kingdom to “Plant a Tree for the Jubilee.” Everyone from individuals to Scout and Girlguiding groups, villages, cities, counties, schools and corporates will be encouraged to play their part to enhance our environment by planting trees during the official planting season between October to March. Tree planting will commence again in October 2022, through to the end of the Jubilee year. With a focus on planting sustainably, the QGC will encourage planting of trees to create a legacy in honour of The Queen’s leadership of the Nation, which will benefit future generations. As well as inviting the planting of new trees, The Queen’s Green Canopy will dedicate a network of 70 Ancient Woodlands across the United Kingdom and identify 70 Ancient Trees to celebrate Her Majesty’s 70 years of service.