The Royal Mint to Gift 95 Coins to 95 People Turning 95, To Celebrate Her Majesty the Queen’s Landmark Birthday 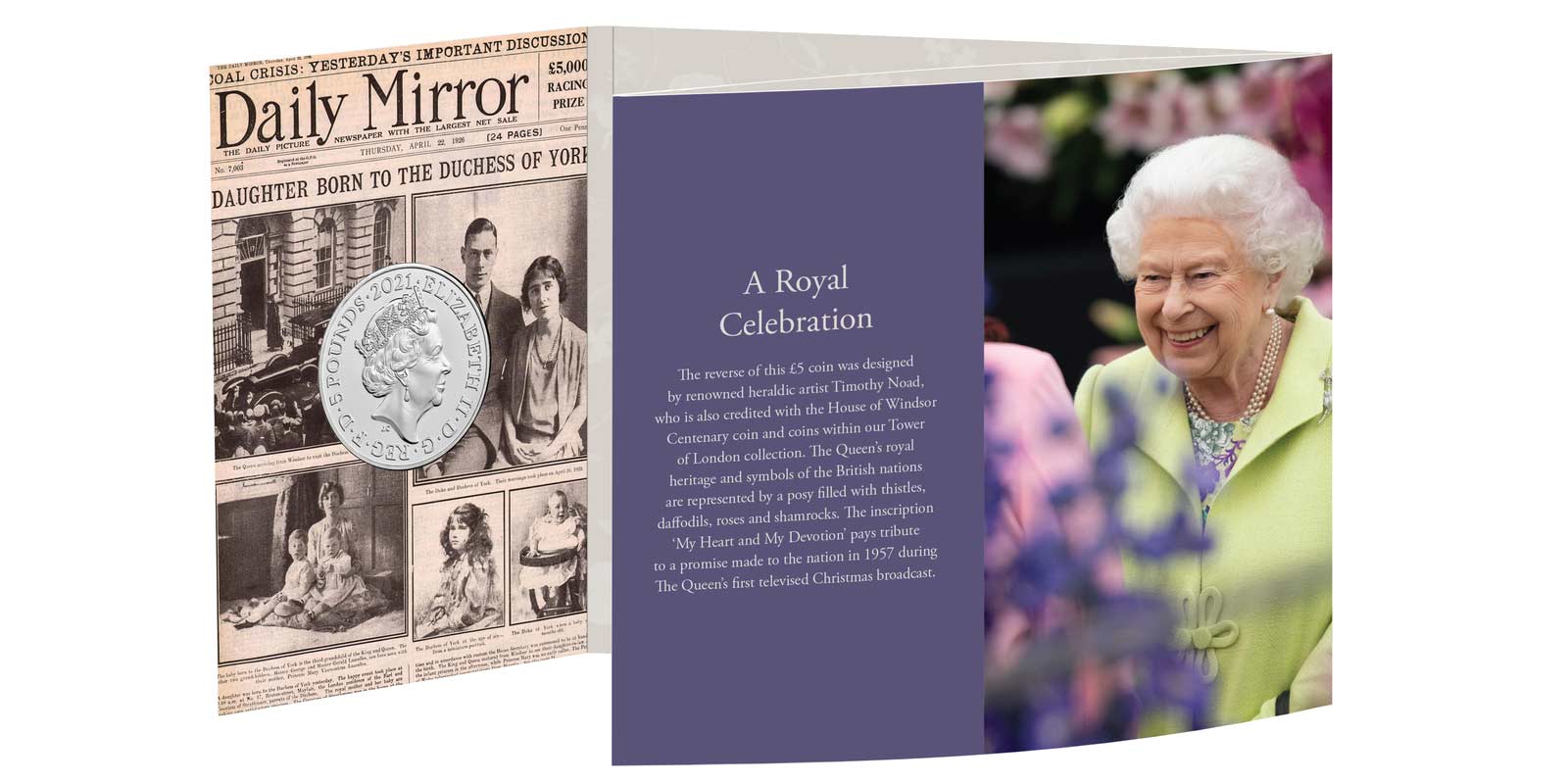 Monday March 1st: The Royal Mint is searching for 95 lucky Brits turning 95 years old this year to gift them a special Queen's 95th Birthday £5 commemorative coin in honour of Her Majesty’s birthday.  The Queen, who will reach the age of 95 on April 21, will have her birthday marked by The Royal Mint, who have struck a range of coins, featuring two new designs, for the occasion.

All the 2021 UK coins in the new collection bear the inscription ‘My Heart and My Devotion’, referencing the promise The Queen made in 1957 and has kept ever since.  There are two designs being released.  The £5 coin features a reverse design created by heraldic artist Timothy Noad. In his design, symbols of the British nations are represented by a posy filled with thistles, daffodils, roses and shamrocks. The design that features on the reverse of the five-ounce and kilo editions was created by designer and sculptor Gary Breeze. His richly symbolic ‘flourish’ design represents The Queen’s nine decades with nine roses, while 54 leaves signify the countries of the Commonwealth.  A limited number of Celebration Sovereigns struck on 21 April 2021, the date of Her Majesty’s 95th birthday, will also mark the occasion.

In celebration of Queen Elizabeth II’s remarkable milestone, The Royal Mint will gift a celebratory coin to 95 individuals turning 95 year’s old this year. Nominations to receive a brilliant uncirculated £5 commemorative coin featuring Timothy Noad’s exquisite design, should be submitted to The Royal Mint’s website with the name and contact details of the nominee. The winners will be drawn at random and asked to provide photographic evidence of birth during 1926.

Clare Maclennan, Divisional Director of the Consumer Division at The Royal Mint said, “Each year The Royal Mint unveils a series of commemorative coins to celebrate key moments and milestones that help shape Britain and what better occasion to celebrate than Her Majesty The Queen’s 95th birthday. Each coin is a miniature work of art and has been designed as a treasured keepsake or gift and we are delighted to be able to gift 95 of them to 95 people celebrating their own landmark birthdays this year.”

Five different effigies of the Queen have been created by The Royal Mint documenting her reign, with her face featured on every British coin in circulation.

The Royal Mint will be contacting the 95 winners via email on Monday 19th April.

For more information about the collection and full terms and conditions, visit royalmint.com/95giveaway