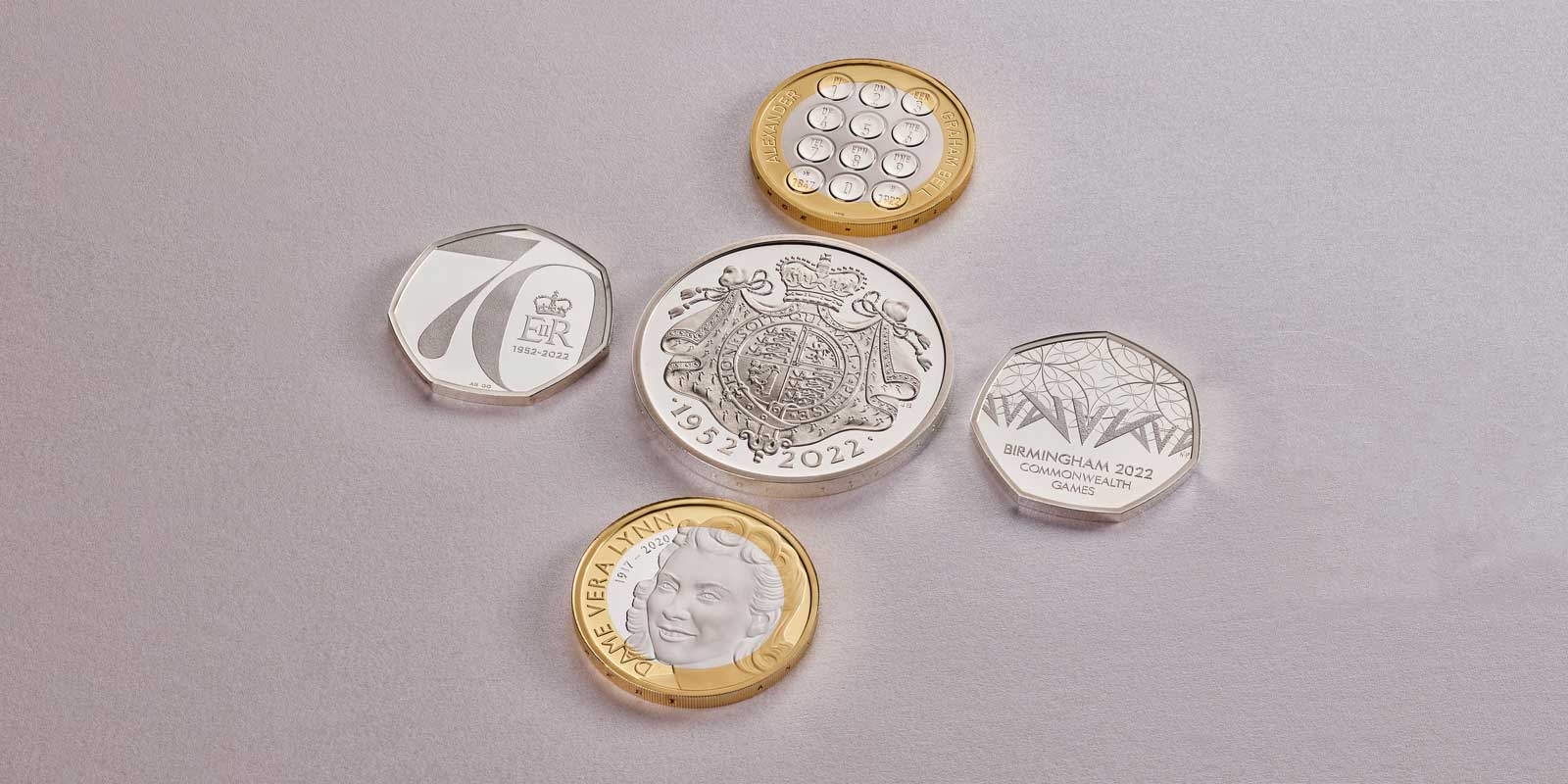 The Royal Mint has today revealed five new coin designs for 2022 including a 50p and a £5 crown in celebration of Her Majesty the Queen’s Platinum Jubilee.

The release is the first chance for collectors to own a keepsake from the Platinum Jubilee collection, including the first 50p coin to celebrate a royal event. The commemorative £5 crown follows the tradition of marking previous Jubilees on crown pieces, while a special edition platinum set has been added to the range, representing a fitting celebration of a momentous 70 years on the throne.

The Royal Mint’s Annual Sets celebrate key events and anniversaries throughout the year, bringing milestones to life on a £5, £2 or 50 pence. Each of the coins features a new and unique design by a commissioned artist and the obverse portrait of Her Majesty the Queen, designed by Jody Clark.

The 2022 Annual Set will commemorate:

Clare Maclennan, Divisional Director of the Consumer Division at The Royal Mint said:

“Each year The Royal Mint unveils a series of commemorative coins to celebrate key milestones that helped shape Britain and this year’s Annual Set is particularly special with a new 50 pence, £5 crown and special platinum set in celebration of Her Majesty the Queen’s Platinum Jubilee.

“As the Original Maker of UK coins, The Royal Mint has been trusted to strike coins for Her Majesty throughout an historic 70 years on the throne and celebrated royal milestones such as previous Jubilees on commemorative crown pieces. The Platinum Jubilee celebration is a spectacular first for the British monarchy and for UK coin, and it is fitting that this historic anniversary has been celebrated on 50 pence – which is Britain’s most loved collectable coin.”

The Platinum Jubilee of Her Majesty the Queen 50p

Her Majesty the Queen’s Platinum Jubilee will be celebrated with a UK 50p coin – which is the first UK 50p to mark a royal event. Designed by Osborne Ross, the coin features a clean reverse design that comprises the number 70, The Queen’s cypher and the years that span her reign thus far.

The Platinum Jubilee of Her Majesty the Queen £5

Her Majesty the Queen’s remarkable 70-year reign will be commemorated on a £5 crown, designed by John Bergdahl. The coin features a fittingly regal design centralised by the quartered shield of the Royal Arms. The precious metals versions also include the edge inscription ‘SERVE YOU ALL THE DAYS OF MY LIFE’ in reference to Her Majesty’s unparalleled longevity as monarch.

Celebrating the Life and Legacy of Dame Vera Lynn

Dame Vera Lynn’s iconic renditions of classic songs such as ‘We’ll Meet Again’ earned her eternal residency within the hearts of many.  The reverse design of this UK £2 coin features a beautifully detailed portrait of Dame Vera as she appeared during the height of her fame.

Celebrating the Life and Legacy of Alexander Graham Bell

Alexander Graham Bell revolutionised the world of communication through the development of his magnum opus, the telephone, This UK £2 coin celebrates this brilliant inventor in the centenary year of his passing. Featuring a design by Henry Gray, the reverse of the coin shows the dial of a push-button phone, along with the words ‘PIONEER OF THE TELEPHONE’ cleverly inscribed on the buttons.

The summer of 2022 sees the Commonwealth Games return to the UK, promising a spectacular occasion for British sport. The reverse of this UK 50p features a design by The Royal Mint’s own Natasha Preece, who has captured the essence of Birmingham 2022 through a striking geometric design.

The 2022 commemorative sets will be available in a range of precious metal and base proof finishes, from 4 January at The Royal Mint website, with prices starting from £30. Each of the coins will be available individually in 2022, starting with the Platinum Jubilee coins which will launch on 6 January featuring a special commemorative obverse design to celebrate the momentous royal occasion.