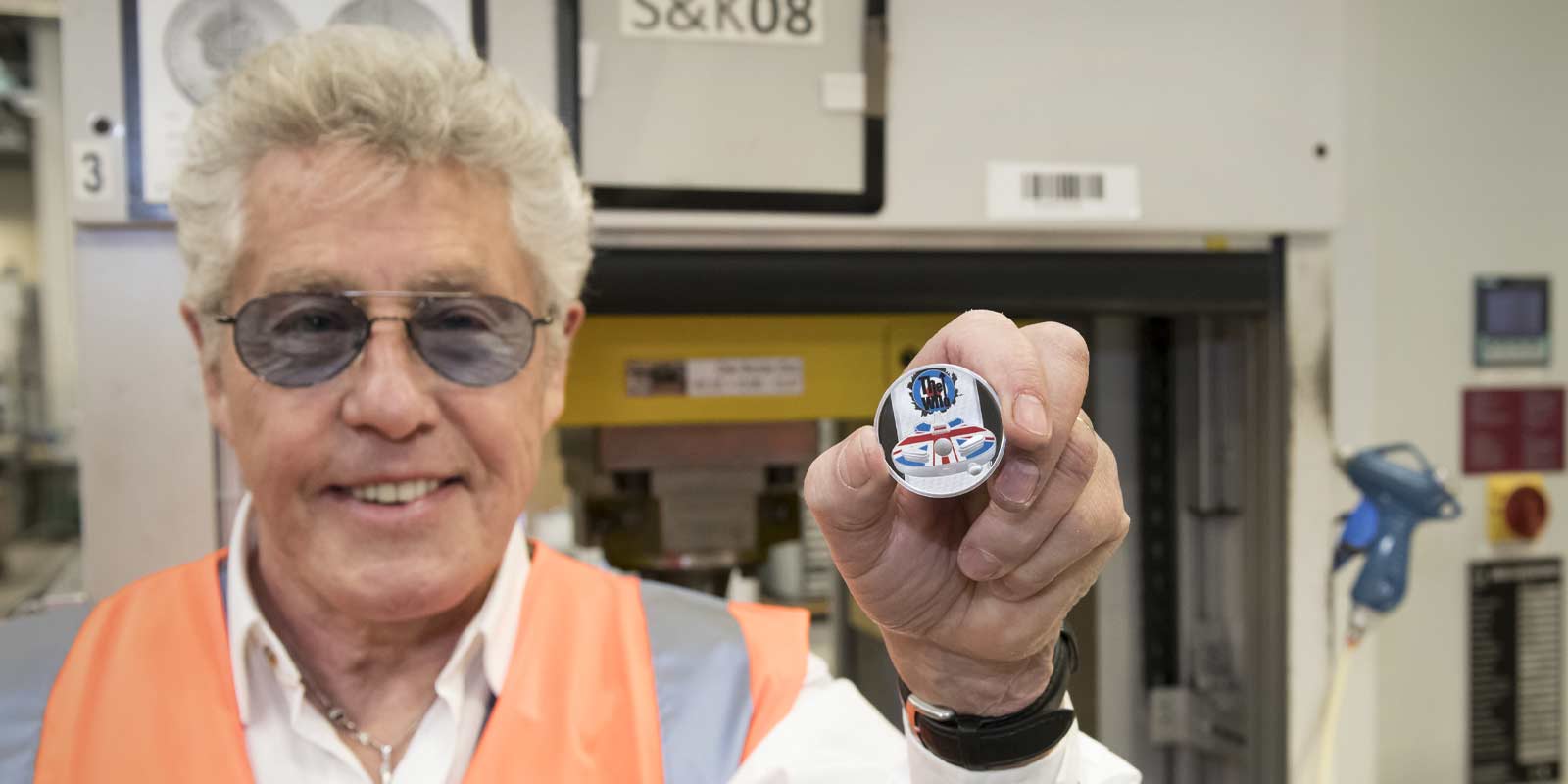 The Royal Mint, the Original Maker of UK coins, has today launched a new range of collectable coins celebrating the iconic British band – The Who. To celebrate the launch of the coin, co-founder and lead singer of The Who, Roger Daltrey, visited The Royal Mint to strike one of the very first coins, giving the band’s seal of approval on the new coin and its design.

The Who collectable coin is the fourth in The Royal Mint’s ‘Music Legends’ series, and follows coins in honour of Queen, Elton John and David Bowie. The coin’s dynamic design includes some of the most iconic symbols from the band’s live and loud performances – including a union flag, Mod logo and speaker-smashing Rickenbacker guitar. Together, the symbols on the coin form a pinball table, a nod to the single Pinball Wizard and album Tommy, one of the band’s most famous creations. With the latest colour printing technology, elements of the coin have been digitally printed to showcase the vibrant red, white and blue of the band’s emblem.

Using the latest innovative technology and manufacturing techniques, a number of coins will feature a special ‘shockwave’ effect, radiating from the speaker - elevating the detail of the coin. Designers and craftspeople at the Mint have developed this effect in honour of The Who’s record-breaking loud concert - a record that was held for a decade.

Clare Maclennan, Divisional Director of Commemorative Coin at The Royal Mint said, “The Who are an iconic British band with an incredible musical legacy, so it felt right to honour them with an official UK coin. The Who coin is the latest in our show stopping Music Legends series, which celebrates legendary British artists through original new designs. It was a privilege to have Roger Daltrey visit the Mint to strike one of the first coins and meet the team of makers that have created this wonderful design. Our Music Legends series is engaging new generations of coin collectors, and we hope this design will become a cherished part of fan’s memorabilia.”

Roger Daltrey, Co-founder and Lead Singer of The Who said, “It’s an honour to have a coin produced to celebrate The Who’s musical legacy. The coin’s design captures the true essence of the band and what we represent. It was a fantastic moment being able to strike one of the very first pieces in the collection and see the range of technologies and processes involved in the making of the coin.”

Pete Townshend, Lead Guitarist of The Who said, “I am delighted that the band's work is being recognised by this fantastic range of coins from The Royal Mint.”

The Who began with three schoolboys who all shared a love of music, from jazz and skiffle, to rock and rhythm & blues. The band was initially made up of John Entwistle, Pete Townshend, Roger Daltrey and later joined by Keith Moon. With a musical legacy spanning more than 50 years, and an impressive record of a 100 million albums sold worldwide, over a billion global streams, members of the Rock & Roll Hall of Fame and the UK Music Hall of Fame, the BRIT and GRAMMY Award winning, The Who, are considered by many today as ‘The Greatest Rock and Roll Band in the World’.

Celebrate The Who, one of Britain’s most iconic bands

About Bravado
Bravado is the leading global provider of consumer, lifestyle and branding services to recording artists and entertainment brands around the world. Part of Universal Music Group, the leader in music-based entertainment, Bravado represents artists in more than 40 countries and provides services including sales, licensing, branding, marketing and e-commerce. Their extensive global distribution network gives artists and brands the opportunity to create deeper connections with their fans through apparel, consumer packaged goods and unique experiences. For more information: http://www.bravado.com