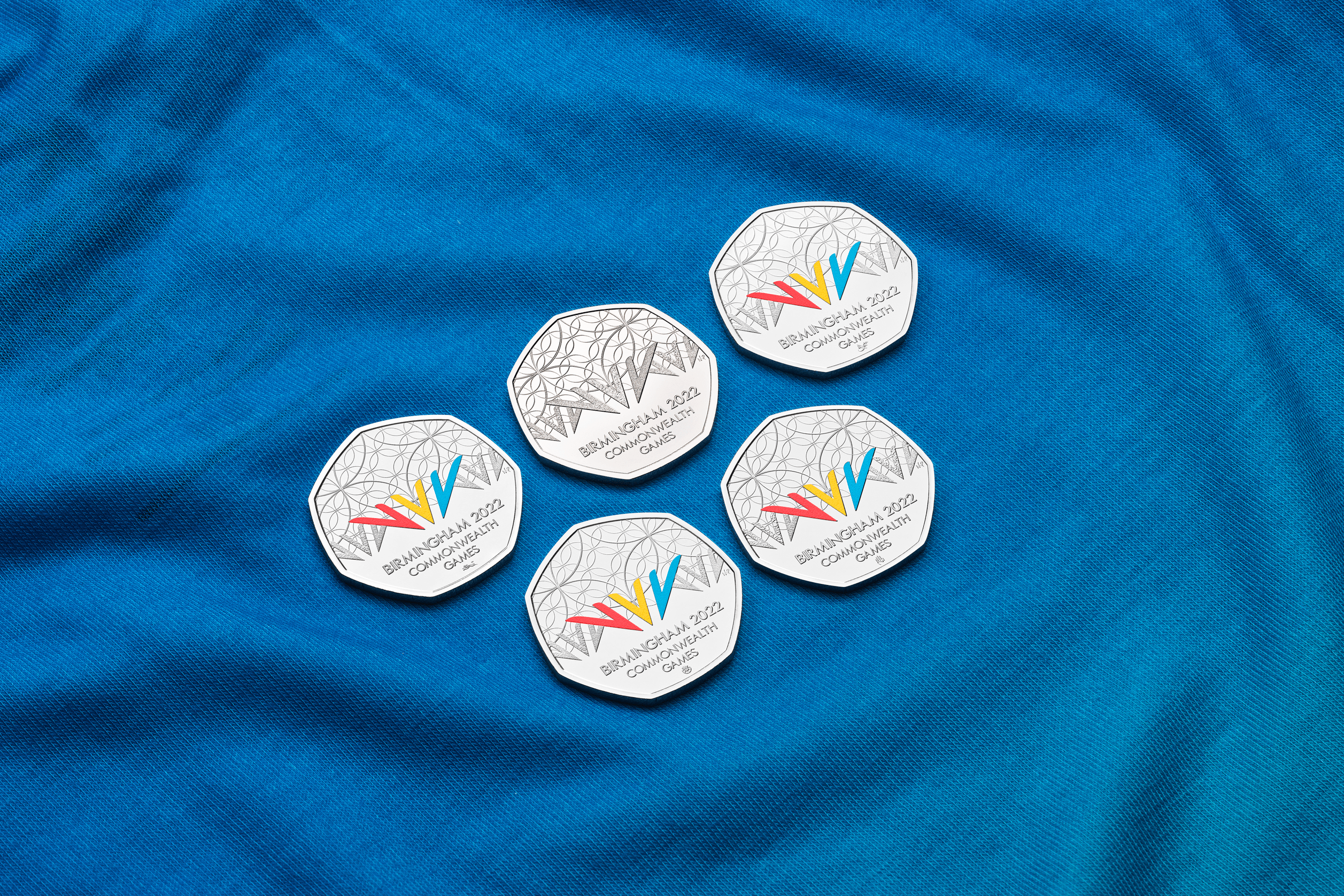 The Royal Mint and Commonwealth Games have teamed up for the launch of a collectable 50 pence coin celebrating Birmingham 2022 – with new coins representing each of the home nations and special colour editions added to the collection, available from today at The Royal Mint.

Marking the global sporting event taking place on British soil next month, the coin was unveiled in The Royal Mint’s Annual Sets in January, celebrating key moments for 2022. Now less than 40 days to go until the Games gets underway, the coin, inspired by the iconic design of the library of Birmingham, is available to purchase individually, in base and precious metal, with new vibrant colour editions.

In a special celebration of the home nations, the 50p coin collection now features a privy mark, a small emblem representing each of the teams, added to the design – meaning sports fans and collectors can own a lasting memento of the epic sporting occasion and show their support for Team England, Team Northern Ireland, Team Scotland and Team Wales.

The collectable coin will also be used for the official coin toss across all team sports, when the eyes of the world are on Birmingham from 28 July until 8 August.

Combining traditional craftsmanship and technology, the 2022 coin designed by the Royal Mint’s Natasha Preece anchors the Birmingham celebration in numismatic history. The geometric design, based on the host city’s landmark, aims to encompass everyone involved in the Games, and representing the shared ethos of equality, inclusivity, and diversity at the heart of Birmingham 2022 and The Royal Mint.

Nicola Howell, Chief Commercial Officer at The Royal Mint said: “Birmingham 2022 is an exciting global event in Britain’s sporting calendar, and The Royal Mint is marking this great occasion with a vibrant 50p design, celebrating the hundreds of talented athletes, the host city and everyone involved in representing the UK on the global stage.

“As the countdown continues, we are delighted to add new coins to the collection celebrating each of the home nations, with the team logo added to the original design. Complete with bespoke commemorative packing, the coins capture the spirit of support behind Team England, Team Northern Ireland, Team Scotland and Team Wales and we hope will be cherished by sports fans and collectors for years to come.

“Our longstanding partnership with Commonwealth Games continues to ensure that the world-renowned sporting occasion is etched in history on UK coin. In exciting news for 2022, the original coin will also play a vital role in this year’s Games, with the start of all team sports decided by the toss of the official commemorative coin.”

Speaking of the design, The Royal Mint’s Natasha Preece said: “The coin design is based on shapes and patterns associated with the Games and the city of Birmingham. This allowed me to create a design that represented the whole Commonwealth family and stayed true to the core values of the Games. Each nation-specific coin also has its own unique privy mark. I had to create them small yet big enough to strike well and still be recognisable; placement was key as I didn’t want to change the balance of the design and wanted to keep it as symmetrical as possible.”

The coin collection is available from Monday 20 June in base metal, silver and gold at The Royal Mint – with the home nations sets released in brilliant uncirculated for £10 and special-edition colour for £18. Visitors to The Royal Mint Experience in South Wales will be able to strike their own coin, as part of the official guided tour.

The Birmingham 2022 Commonwealth Games, which will be held from 28 July until 8 August 2022, will be a once in a lifetime opportunity to put the city, the region and its people on the global stage.  The Games is already proving to be a catalyst for transformation across the West Midlands, attracting new investment and funding, creating jobs and apprenticeships for local people and new opportunities for local businesses, as well as accelerating projects that will ensure the region is ready to host a fantastic sports and cultural celebration.  Birmingham 2022 will be the Games for everyone, bringing people together from across Birmingham and the region, to provide a warm welcome to millions of visitors during the summer of 2022.    Find out more at www.birmingham2022.com