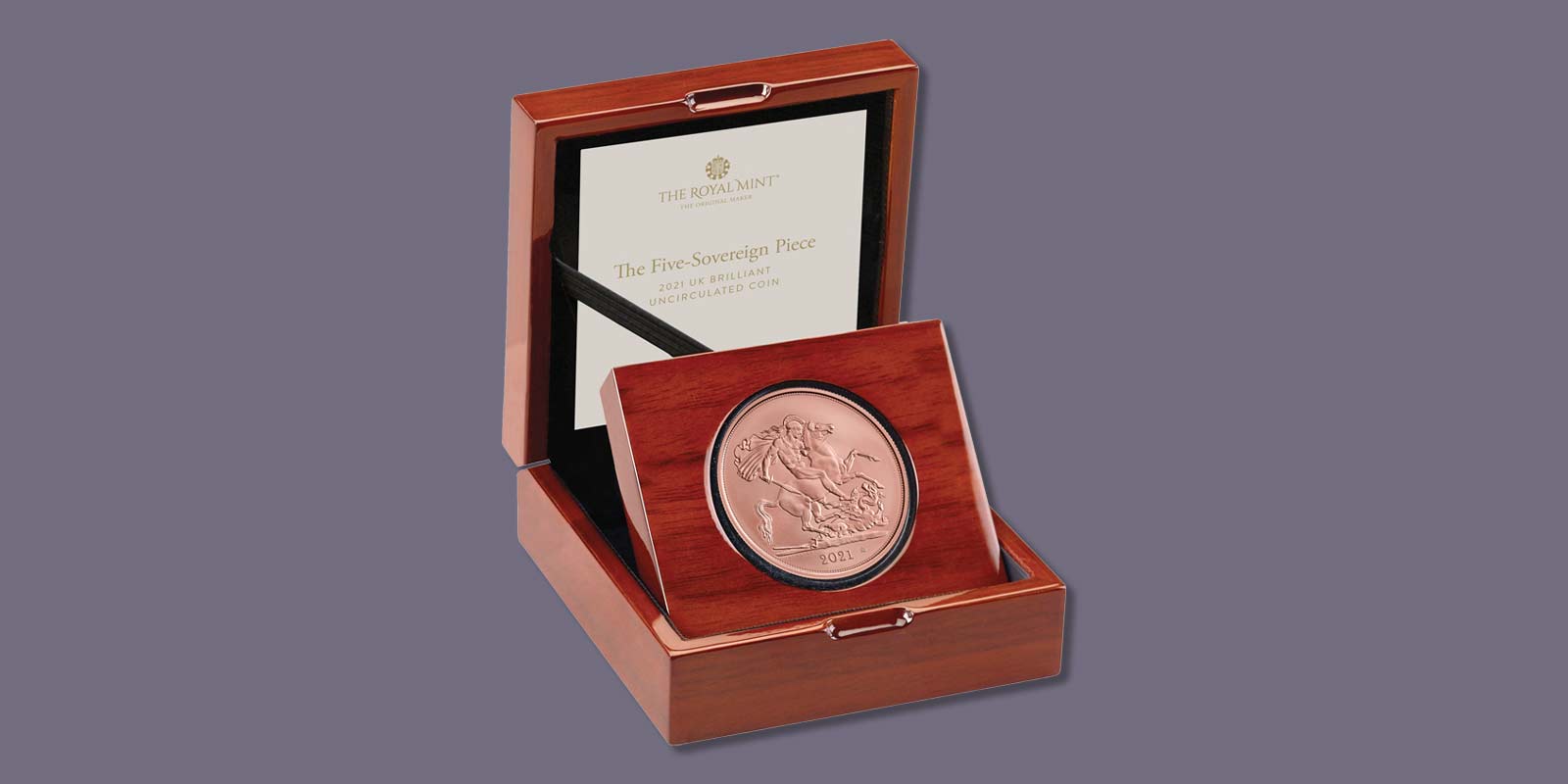 As the original maker of UK coins, The Royal Mint has launched the Five-Sovereign Piece as the final coin in its popular 2021 Sovereign Collection marking and celebrating Her Majesty the Queen’s 95th Birthday. Reborn in 1817, the consistent use of Pistrucci’s design has made The Sovereign accepted and trusted worldwide. Whilst also being an instantly recognisable coin, it has come to be a favourite amongst coin collectors across the globe.

The largest and rarest of the coins in the 2021 Sovereign Collection, the Five-Sovereign Piece allows collectors to admire the stunning detail of Benedetto Pistrucci’s acclaimed St George and the dragon design. The design has been digitally remastered from the original Pistrucci tooling, to ensure an accurate interpretation of his 200-year-old St George and the dragon design. This particular coin also contains five times the weight of gold as the standard Sovereign and will this year feature a special element in celebration of Her Majesty The Queen’s 95th birthday - a unique privy mark - a Royal Crown with 95 entwined.

Clare Maclennan, Divisional Director of the Commemorative Coin at The Royal Mint said, “As the Original Maker of UK coins, The Sovereign has been long associated with The Royal Mint’s 1,100-year history. The launch of the Mint’s annual Sovereign Collection has become eagerly anticipated by collectors across the globe, and we are delighted to be introducing the Five Sovereign Piece as the final coin in this year’s collection - the largest and rarest coin in The Sovereign 2021 Collection.

“This year marks a truly extraordinary and special moment in British royal history - Her Majesty The Queen’s 95th birthday. To celebrate this remarkable milestone, the 2021 Five-Sovereign Piece will have an additional special element - a unique privy mark. The unique privy mark represents the royal cypher crown with the number ‘95’ to mark the celebration of Her Majesty’s 95th birthday – a fitting tribute to this wonderful milestone.”

Born on 21 April 1926, Her Majesty The Queen celebrates her 95th birthday in 2021. Currently the world's longest reigning head of state and the longest reigning monarch in British history, she has overseen a period of extraordinary change. Throughout, The Sovereign has remained a symbol of quality and stability.

During the 19th century The Sovereign was known as ‘the chief coin of the world’, while its role has changed over the years that followed, it maintains a global reputation for accuracy, reliability and quality.

The 2021 Five Sovereign Piece will be available as a Brilliant Uncirculated edition. To view the coin visit www.royalmint.com/Sovereign