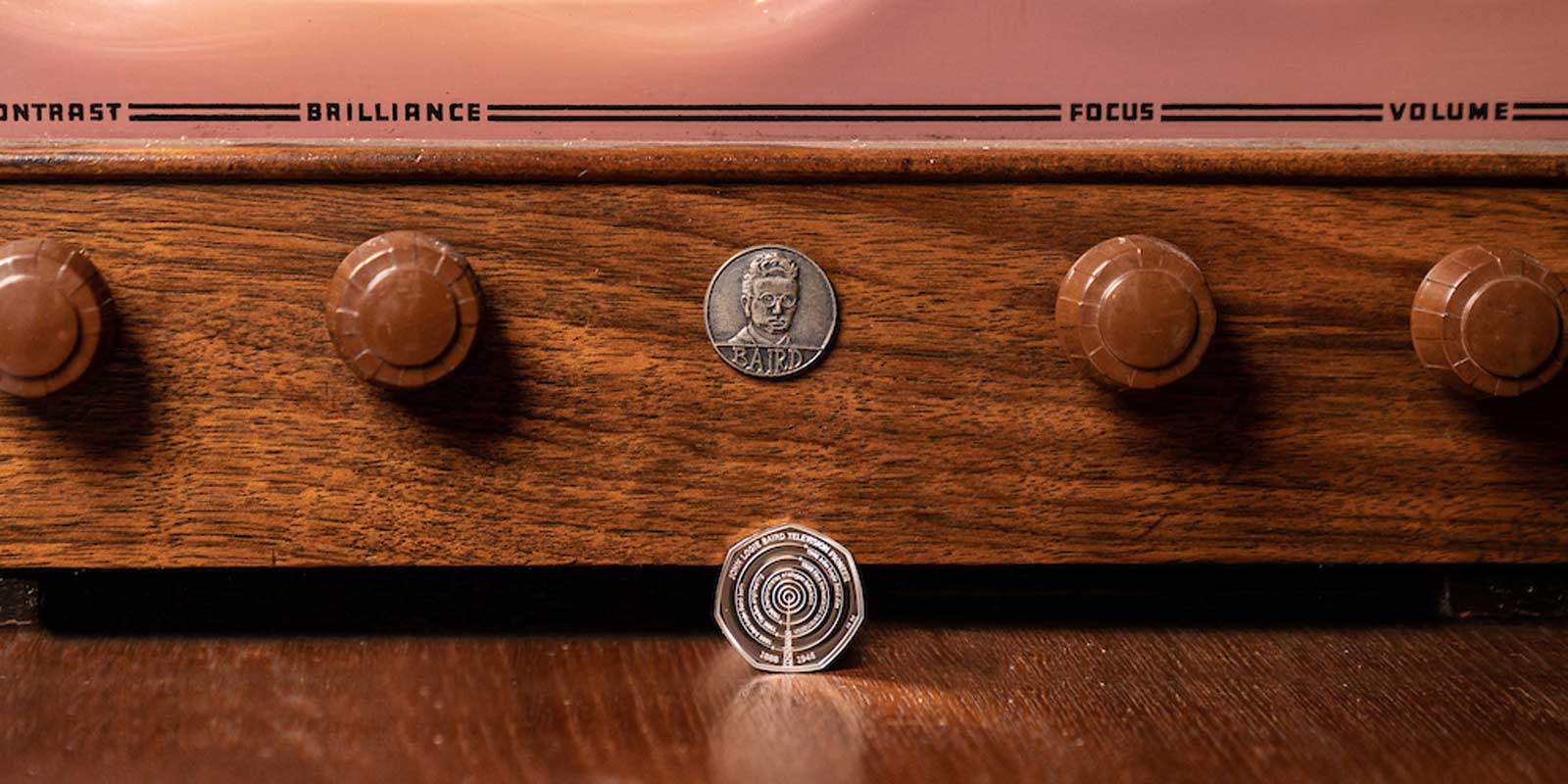 The Royal Mint, the Original Maker of UK coins, has released the third coin in its Innovation in Science series - a commemorative 50p coin celebrating the life and work of John Logie Baird.

‘The Father of Television’, Scottish inventor, John Logie Baird changed society and entertainment around the world with the early invention of the electromechanical television.

In honour of television’s founding father, The Royal Mint’s commemorative coin was first unveiled in the 2021 Annual Set. The design, by commissioned artists Osborne Ross, bares a graphic representation of broadcast transmission, with circular shapes emanating a silhouette of the Crystal Palace mast - the site of John Logie Baird’s former television station and transmitter.

The coin also features the milestone moments of one of Britain’s greatest original makers; from his birth in Helensburgh Scotland in 1888, studying electrical engineering at Glasgow’s Royal Technical College in 1926, the first demonstration of analogue television in 1926, the first transatlantic transmission in 1928 and the end of a full and successful life in 1946.

The design was brought to life with the expertise and innovation techniques gathered across the 1,100-year history of The Royal Mint, where the product design team adopted a skilful ‘scooping’ technique between the lines on the model to create a quality 3D finish.

Available in limited-edition Gold Proof, Silver Proof, Silver Proof Piedfort, as well as a Brilliant Uncirculated edition, the coins have been created in consultation with Iain Baird, grandson of John Logie Baird, to mark the 75th Anniversary year of his grandfather’s passing.

Speaking on behalf of the Baird family, Iain Baird commented: "The Baird family feels extremely honoured that The Royal Mint has chosen to recognise my grandfather's contributions in this way.  He was involved in both the technology and the progress of television broadcasting and the coin design illustrates his dual role as a pioneer in the scientific world as well as in a brand-new medium of communication."

Clare Maclennan, Divisional Director of Commemorative Coin at The Royal Mint said, “The Life and Work of John Logie Baird is an exciting addition to our popular ‘Innovation in Science’ series, which celebrates the legendary names at the heart of Innovation and Science on a commemorative 50p. The design represents Baird’s accomplishments and the invention of broadcast transmission, which has shaped culture and entertainment as we know it today. It has been a pleasure and privilege to work with the Baird family to commemorate a true British icon and a pioneer of one of the greatest scientific discoveries of the twentieth century.”

The Life and Works of John Logie Baird follows Stephen Hawking and Rosalind Franklin, as part of the Innovation in Science Series. Find out more about the John Logie Baird coin, the Science in Innovation Series and the 2021 Annual Set at www.royalmint.com.

Pay homage to one of the greatest inventors of the twentieth century with the latest addition to the Innovation in Science series.