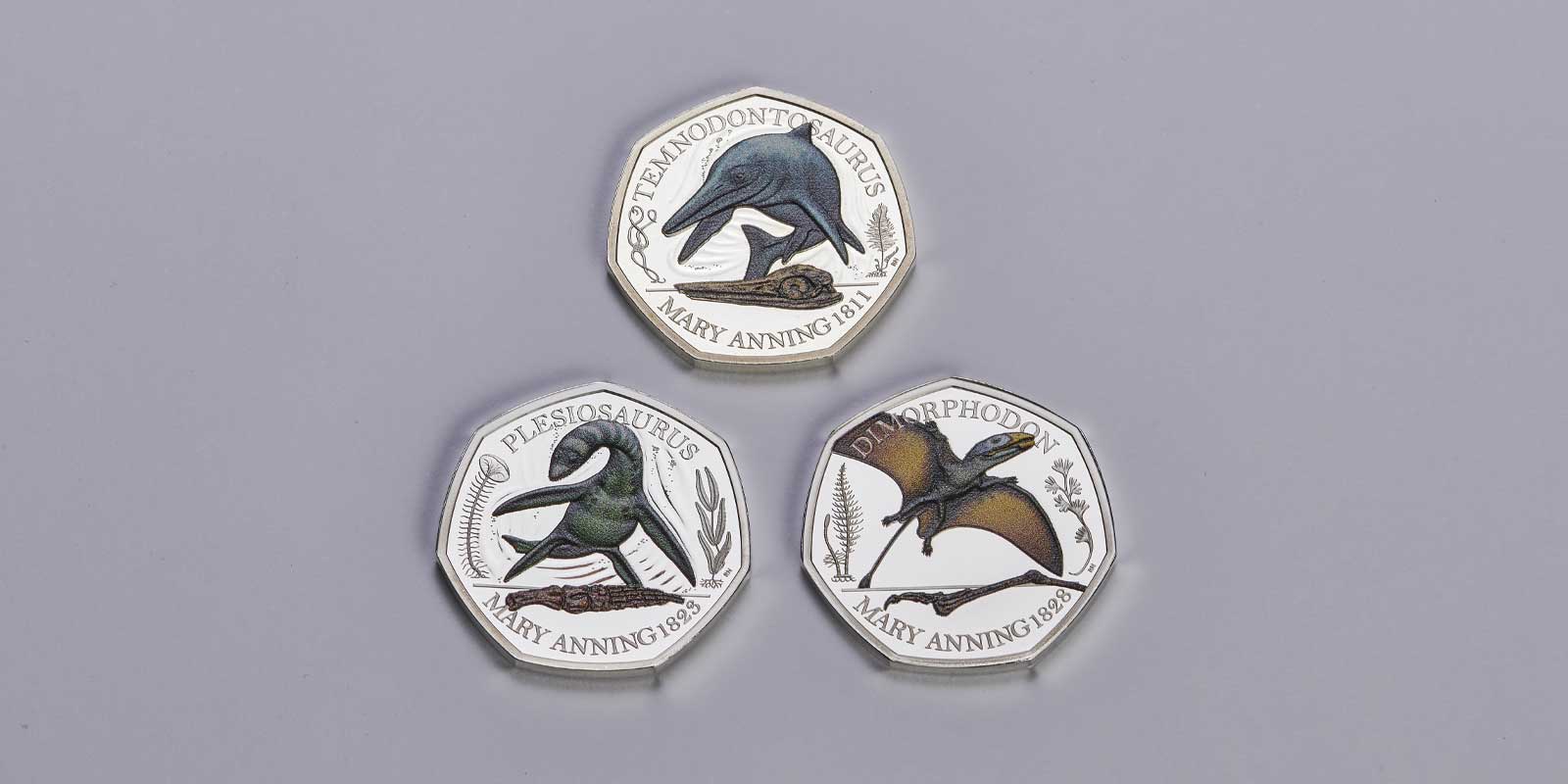 This is the second coin collection in The Royal Mint’s ‘Tales of the Earth’ series celebrating the awe-inspiring ancient creatures discovered here in Britain. The next coin collection shines a light on one of Britain’s greatest fossil hunters - Mary Anning. The first release in the Mary Anning Collection features Temnodontosaurus, one of the largest types of ichthyosaur and an apex predator that once roamed the ocean that covered much of southern Britain. Other coins in the collection will Anning’s discoveries of Plesiosaurus and Dimorphodon.

Renowned British paleo-artist and designer of the first Tales of the Earth commemorative coin collection, Robert Nicholls, has brought all three of Mary Anning’s discoveries back to life.  Based on current understanding and the expert guidance of Sandra Chapman of the Earth Sciences Department at the Natural History Museum, each of the coin design’s created by Robert are a scientifically accurate reconstruction of the creatures and the environment that they existed in. By using the latest colour printing techniques, the intricate characteristics of each of the prehistoric marine reptiles have been captured to illustrate accurately how these creatures looked like on Earth millions of years ago, making them appear dynamic and adding a new level of visual fidelity to the coins.

Clare Maclennan, Divisional Director of Commemorative Coin at The Royal Mint said, “It is an absolute pleasure to continue the popular Tales of the Earth commemorative 50p coin series in conjunction with the Natural History Museum. The next collection in the series celebrates fossil hunter and pioneering palaeontologist Mary Anning, with three coin’s featuring Anning’s astonishing discoveries of Temnodontosaurus, Plesiosaurus and Dimorphodon.

In addition to each of the coin designs being a scientifically accurate reconstruction of the creatures and the environment they lived in, we have combined augmented reality technology with the coins to bring the animals to life through animation and allow people to explore the details of the prehistoric marine reptiles from the comfort of their home.”

Clare Matterson, Executive Director of Engagement at the Natural History Museum said: “We are thrilled to continue working with The Royal Mint on the Tales of the Earth series. The Mary Anning Collection celebrates a pivotal figure in the understanding of palaeontology, important contributions to science that were rarely acknowledged in Mary’s lifetime. It is fantastic to see Mary celebrated in such a special way in 2021.”

Mary Anning was born in Lyme Regis, Dorset, in 1799 and spent her entire life in this small seaside town on England’s south coast. Anning’s father Richard had a large family to support and, in order to supplement his modest income as a carpenter, he set up a curiosity table outside their home selling fossils to tourists. It was at this point that she developed an interest in helping her father and amongst the curiosities they discovered were ‘snake stones’ (ammonites), ‘devil fingers’ (belemites) and ‘verteberries’ (vertebrae). Aged only 12 or 13, Anning made her first discovery, an articulated skeleton of an ichthyosaur, a type of marine reptile that once roamed Jurassic seas. From this point forward Anning made a number of astonishing discoveries making her the greatest fossil hunter of the Victorian era.

The first coin in the series features Temnodontosaurus and is available in gold and colour and non-colour silver proof editions, as well as a brilliant uncirculated finish and a special colour printed brilliant uncirculated edition, exclusively available from The Royal Mint. Visit www.royalmint.com/MaryAnning to view the full commemorative coin range.

About the Natural History Museum

The Natural History Museum is both a world-leading science research centre and the most visited natural history museum in Europe. With a vision of a future in which both people and the planet thrive, it is uniquely positioned to be a powerful champion for balancing humanity’s needs with those of the natural world.

It is the custodian of one of the world’s most important scientific collections comprising over 80 million specimens. The scale of this collection enables researchers from all over the world to document how species have and continue to respond to environmental changes - which is vital in helping predict what might happen in the future and informing future policies and plans to help the planet.

The Museum’s 300 scientists continue to represent one of the largest groups in the world studying and enabling research into every aspect of the natural world. Their science is contributing critical data to help the global fight to save the future of the planet from the major threats of climate change and biodiversity loss through to finding solutions such as the sustainable extraction of natural resources.

The Museum uses its enormous global reach and influence to meet its mission to create advocates for the planet - to inform, inspire and empower everyone to make a difference for nature. We welcome over five million visitors each year, our digital output reaches hundreds of thousands of people in over 200 countries each month and our touring exhibitions have been seen by around 30 million people in the last 10 years.