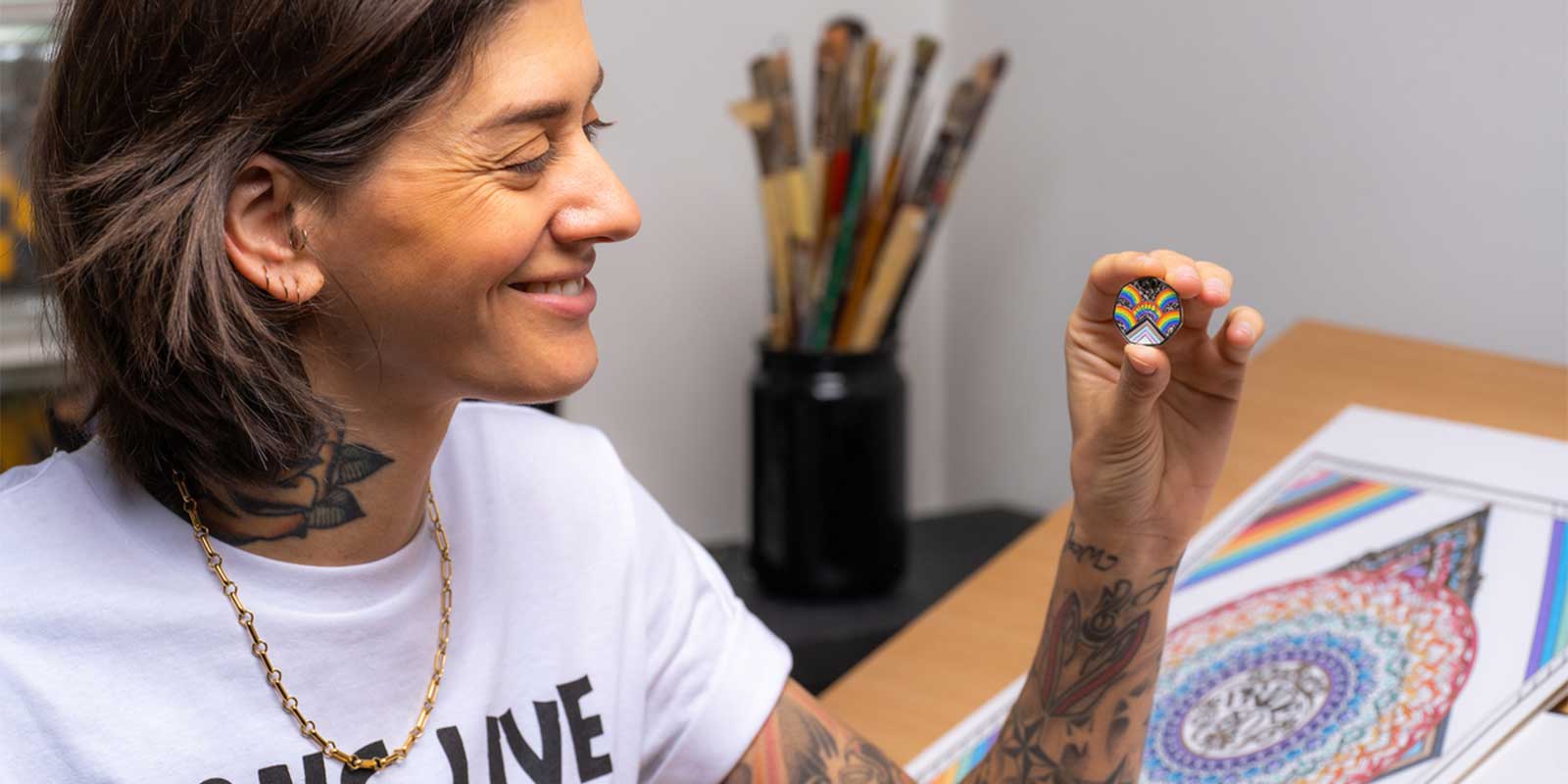 The Royal Mint has today launched a commemorative 50p celebrating the 50th anniversary of Pride UK. The coin marks the first time Britain’s LGBTQ+ community has been celebrated on official UK coinage, developed in collaboration with Pride in London. Five million coins will also enter general circulation later this year, making the landmark design accessible to all.

The 50p design, revealed by The Royal Mint last month, features Pride in London’s values of Protest, Visibility, Unity, and Equality in rainbows on the reverse (tails) of the coin. With state-of-the-art colour printing technology, the iconic colours of the Pride progression flag are recreated with special-edition colour versions of the silver and brilliant uncirculated coins.

Following an LGBTQ+ art exhibition hosted by Pride UK, The Royal Mint invited participating artists to submit entries in a competition to create a reverse design for a coin celebrating the 50th anniversary of Pride UK. The winning submission selected by The Royal Mint Advisory Committee was the work of Dominique Holmes, an east London artist, writer, and LGBTQ+ activist with a varied artistic background that includes tattoo artistry. 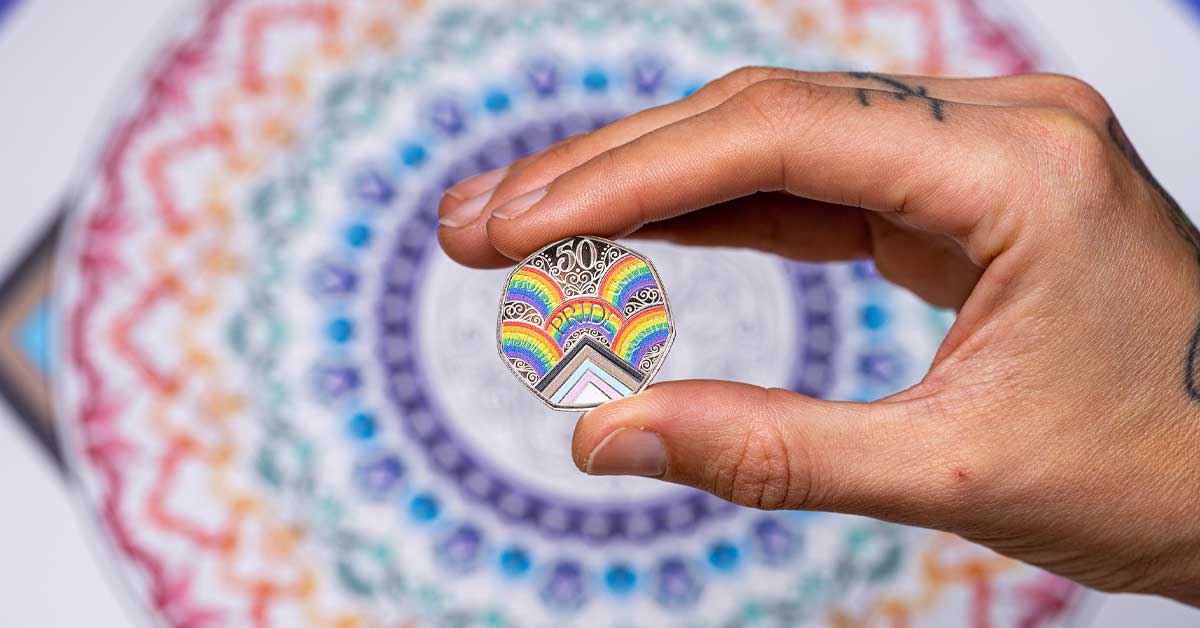 Speaking about their design, Dominique Holmes said: “Working to the scale of a 50 pence piece was interesting for me as I’m used to working on a larger scale. The main challenge was ensuring that the important messages of protest and visibility could be clearly understood on the coin. I had to keep a 50p next to me at all times as I worked to keep my sketches in check!

“Seeing the design and the message of Protest and Pride on the coin itself was quite moving. Growing up in the 80s and 90s in the UK, I never saw this sort of positive LGBTQ+ representation, and I feel very proud to have worked on something that celebrates and commemorates such an historic moment for the LGBTQ+ community and the Pride movement so publicly.

“This is a significant milestone in the fight for LGBTQ+ rights and equality. Pride means so much to me and to so many people across the UK and beyond, and it’s important that we take time to celebrate the progress made over the last 50 years, whilst continuing the important work for our community."

Nicola Howell, Chief Commercial Officer at The Royal Mint said: “It has been a pleasure working with Dominique on the 50th Anniversary of Pride coin. Their design is a fitting tribute to the legacy of Pride UK, and we know how excited collectors will be to find one in their change. We are always looking to work with talented British artists from a range of backgrounds who are passionate about bringing their own diverse experiences to life on an official UK coin.”

The launch of the new LGBTQ+ coin forms part of The Royal Mint’s wider commitment to diversity and inclusion. Alongside D&I training for all employees, a network of D&I Champions and employee-led LGBTQ+ society, ‘Enfys’, employees from The Royal Mint will be marching in the Pride in London parade on 2nd of July to show their support to the LGBTQ+ community.

As part of the launch, The Royal Mint will make a financial contribution to London LGBT Community Pride C.I.C. The 50p will be available to purchase via The Royal Mint website and includes gold, silver, and brilliant uncirculated versions. 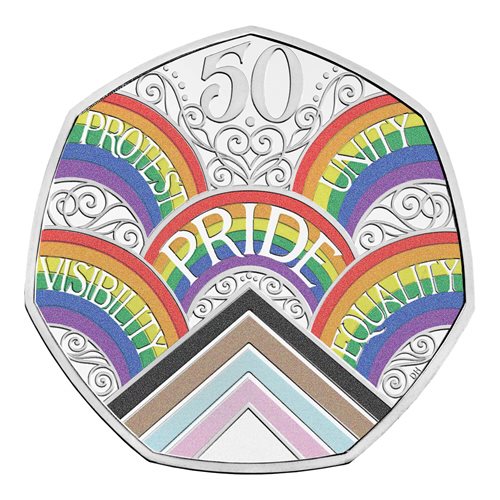 Over the last 50 years, Pride UK has forged an incredible legacy that is synonymous with visibility, unity and equality. Celebrate the historic 50th anniversary of this landmark movement today.

ABOUT PRIDE IN LONDON

Pride in London is a volunteer-led organisation responsible for delivering the capital’s flagship LGBT+ Pride parade and events since 2013. Pride in London’s mission is to promote visibility, unity, and equality in society for all LGBT+ people and allies. We do this by producing LGBT+ Pride events that inspire, celebrate, educate, and commemorate our diverse community.

This year marks 50 years since the UK’s first pride protest march took place in London in 1972. From these historic origins, the annual event now welcomes over 1.5 million LGBT+ people and allies onto the streets of London.