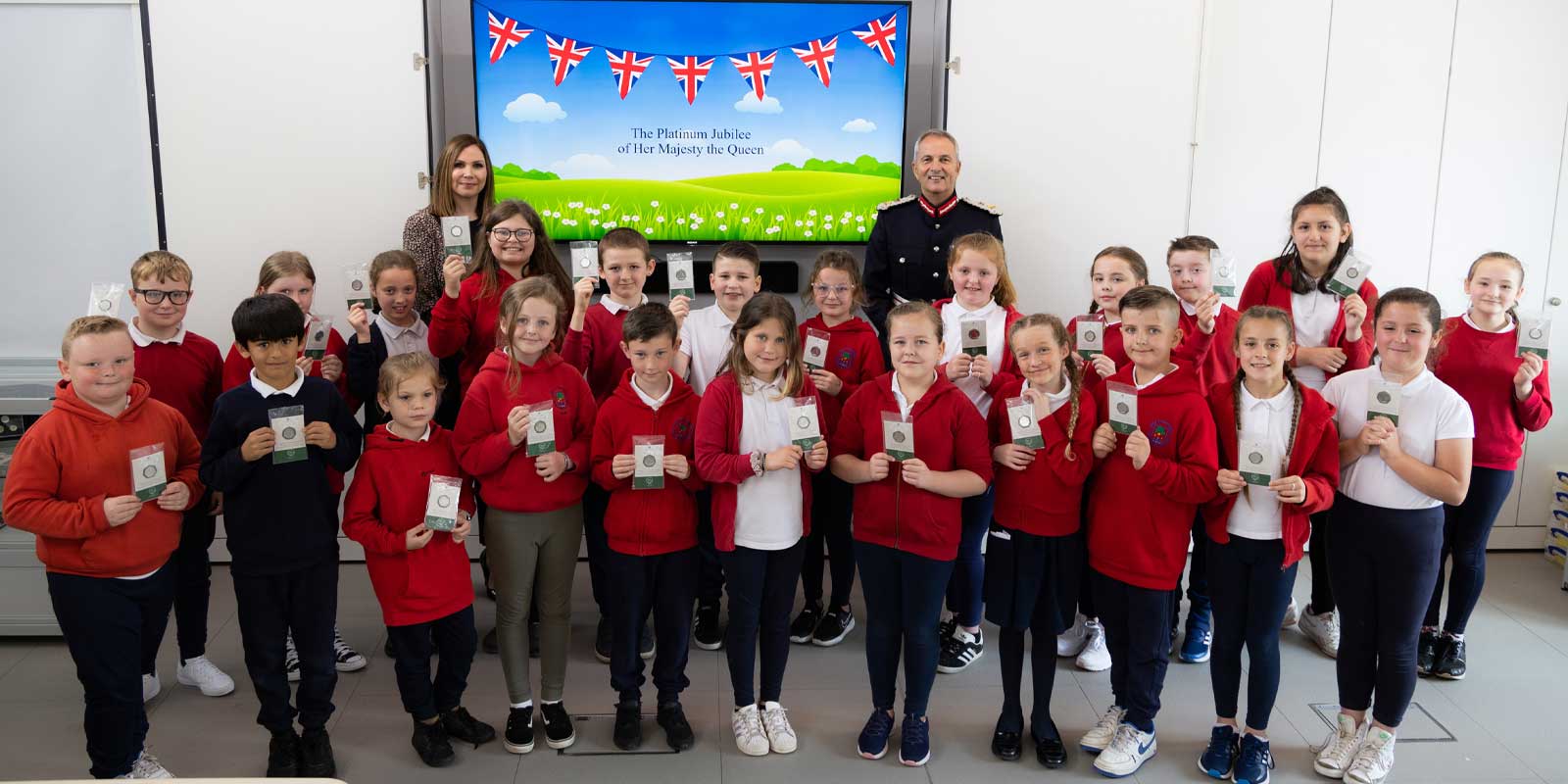 The Royal Mint has hosted school children from Coed Y Dderwen in Merthyr Tydfil for a special presentation of commemorative Platinum Jubilee 50p coins, as part of celebrations to mark Her Majesty’s historic seventy years on the throne.

As the trusted maker of coins for the monarchs for 1,100 years, The Royal Mint has teamed up with The Queen’s Green Canopy (QGC) to gift 7,000 special-edition 50ps to children completing a special Jubilee edition of the RFS Junior Forester Award.

The QGC is a unique tree planting initiative which invites people from across the UK to “plant a tree for the Jubilee”. The Award aims to inspire the next generation of tree planters across the nation.

Representing the first school in Wales to achieve the Junior Forester Award, twenty-six children, aged 8-10, from Coed Y Dderwen were invited to The Royal Mint Experience for a special presentation made by Her Majesty’s Lord Lieutenant of Mid Glamorgan Peter Vaughan.

At the event in Llantrisant, the children enjoyed a tour of the visitor attraction to learn more about how coins for the nation are made – The Royal Mint has struck five effigies of the Queen on circulating coin throughout her reign and marked royal milestones throughout history. The Queen also signs off on all coins made by The Royal Mint as part of The Royal Proclamation.

For an extra special treat, the children met Royal Mint Designer Dominique Evans, an experienced coinage artist and designer of the special-edition packaging for the Platinum Jubilee coins and took part in a Platinum Jubilee medal-making workshop run by Royal Mint Museum.

The visit also took in the Platinum Jubilee hedgerow planted by Royal Mint employees to represent the wider commitment to The Queen’s Green Canopy initiative.

The Lord Lieutenant, who also attended the Royal Mint’s official tree planting ceremony in October, was thrilled to return to present the successful junior foresters with their Platinum Jubilee 50p coins.

Peter Vaughan QPM, CStJ, HM Lord Lieutenant of Mid Glamorgan said: “The children and teachers at Coed Y Dderwen have led the way in Wales as the first school to complete the RFS Junior Forester Award, and it is my pleasure to present The Royal Mint’s commemorative Platinum Jubilee 50p in recognition of their achievement. Just as the coin is an historic memento of the Queen’s 70 years on the throne, the children’s commitment to the Queen’s Green Canopy imparts a wonderful legacy of Her Majesty that will inspire and benefit future generations. Congratulations to all involved.”

Rebecca Morgan, Divisional Director of Collector Services at The Royal Mint, added: “The story of Her Majesty The Queen’s remarkable reign has been told on UK coins since her accession to the throne 70 years ago, and the Platinum Jubilee 50p marks this historic achievement. The Royal Mint is delighted to be celebrating this milestone with children across the nation who are giving up their time to support the Queen’s Green Canopy legacy project and extend a huge congratulations to pupils from Coed Y Dderwen, who are the first in Wales to receive their special-edition collectable coin to treasure in recognition of the once-in-a-lifetime celebration for years to come.”

Sarah Townsin, Head Teacher at Coed Y Dderwen, commented: “We are so proud to be the first school in Wales to achieve the RFS Junior Forester Award. The children have thoroughly enjoyed taking part in The Queen’s Green Canopy project. It has enriched their learning and provided them with increased knowledge of the environment around them and sustainability. Visiting The Royal Mint today to receive the commemorative Platinum Jubilee 50p coin will be a memory that will stay with the children forever. It has inspired our pupils to continue the good work back in their local community.”