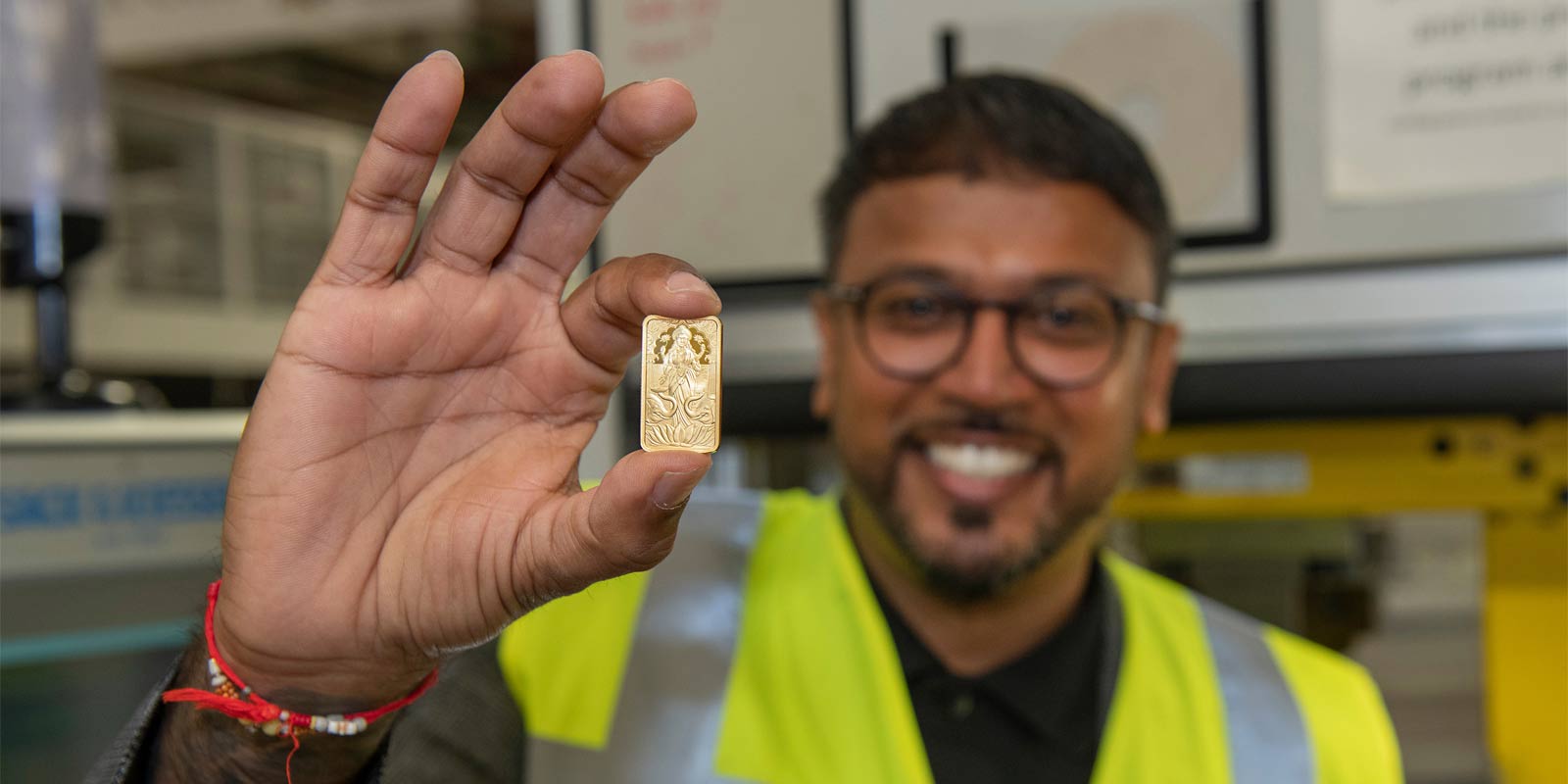 As part of its ongoing commitment to diversity and inclusion, The Royal Mint has launched the first UK bullion bar range to celebrate Diwali- the festival of lights.  The ‘Lakshmi’ bar – a 20 gram gold bar with the Goddess of Wealth engraved intricately into the precious metal, was designed by Royal Mint designer Emma Noble, through close collaboration with the Shree Swaminarayan Temple in Cardiff to ensure accuracy and cultural authenticity in design.

The bar, retailing at £1080, sees The Royal Mint’s expansion of diverse, cultural celebrations, following the success of the 1g and 5g gold bars in henna-inspired packaging which launched last year and proved incredibly popular with customers celebrating Diwali.

Andrew Dickey, Divisional Director for Precious Metals at The Royal Mint, comments: “With gold being a traditional and auspicious gift during the Diwali festival, we wanted to develop a product that incorporates both beauty and tradition, but with a modern twist. The bar is a shining example of this and we were delighted to work with Nilesh Kabaria of the Shree Swaminarayan Temple  in Cardiff to ensure that we represent the Hindu Goddess of Wealth accurately and appropriately.”

Nilesh Kabaria is a devotee at the Shree Swaminarayan Temple and has worked closely with The Royal Mint on the design and development of the product.  Nilesh comments, “My first reaction when I saw the final version was wow – it’s incredible.  I love the intricate detail that Emma has been able to include on such a small surface, and on my recent visit to see the bar being struck, I was amazed to see the final version with every detail in perfect harmony.  It’s wonderful to see an international brand such as The Royal Mint taking such a considered and active approach to celebrate the Hindu culture within their product range.”

The bar will also be blessed at the Shree Swaminarayan Temple’s Diwali ceremony as part of the ‘Lakshmi Poojan’ with colleagues from The Royal Mint in attendance on November 4th.

Traditionally, Lakshmi plays an important role in Hindu culture, and her iconography is used on auspicious gifts used to celebrate special occasions such as weddings and births. During these celebrations, gold is often given to family, friends and colleagues symbolising wealth, fortune and prosperity.

About the Lakshmi bar and design:

The bar represents Lakshmi, the Hindu goddess of wealth, fortune and prosperity.  Her four arms are symbolic of the four goals of humanity that are considered good in Hinduism – dharma (pursuit of ethical, moral life), artha (pursuit of wealth, means of life), kama (pursuit of love, emotional fulfilment) and moksha (pursuit of self-knowledge, liberation)

In Lakshmi's iconography, she is either sitting or standing on a lotus and typically carrying a lotus in one or two hands. The lotus carries symbolic meanings in Hinduism and other Indian traditions. It symbolises knowledge, self-realisation and liberation in Vedic context, and represents reality, consciousness and karma (work, deed) in the Tantra. Below, behind or on the sides, Lakshmi is sometimes shown with one or two elephants and occasionally with an owl. Elephants symbolise work, activity and strength, as well as water, rain and fertility for abundant prosperity. The owl signifies the patient striving to observe, see and discover knowledge particularly when surrounded by darkness.

As a bird reputedly blinded by daylight, the owl also serves as a symbolic reminder to refrain from blindness and greed after knowledge and wealth has been acquired.