“Coins are pieces of art and maintainers of history and tradition and so to see my design on an official UK coin that celebrates and raises awareness of such an important discovery is a dream come true.” Iris De La Torre

The commemorative 50p celebrates the 100th anniversary of the discovery of insulin, marking the historic medical breakthrough for the first time on official UK coin. It is the fifth coin in The Royal Mint’s ‘Innovation in Science’ series and celebrates the discovery by researchers; Dr John Macleod, Sir Frederick Banting, Dr Charles Best and Dr James Collip in 1921.

First-time coin designer Iris De La Torre was given the honour of creating the ‘100 Years of Insulin’ 50p after her design was selected by The Royal Mint Advisory Committee, and ultimately approved by the Chancellor and Her Majesty the Queen.

Iris embraced the switch from jewellery to metal with ease, creating a design which represented the chemical construction of insulin through hexagon patterns and a bold typeface. The jewellery artist hails her recent debut in coin design as “a dream come true” and has urged more designers to consider working with The Royal Mint as it looks to attract a more diverse pool of artists.

Speaking of the opportunity, Iris said: “My work has always had a strong illustrative quality and I was confident that my graphic style would successfully transfer to coin design. Coins are pieces of art and maintainers of history and tradition and so to see my design on an official UK coin that celebrates and raises awareness of such an important discovery is a dream come true.”

The Royal Mint is the original maker of UK coins, and produces a wide range of commemorative designs each year celebrating key themes, anniversaries, and remarkable individuals. Throughout its 1,100-year history of craftsmanship, these coins have been designed by artists from a variety of backgrounds, each applying their own creative interpretations.

The Royal Mint welcomes submissions from all resident artists in the UK, celebrating the best of British talent on official UK coin.

The Royal Mint Design Lead Lee Jones said: “We want to champion the best of British creativity and that means making sure we’re working with a diverse range of artists and designers, alongside our highly skilled in-house teams. It’s such a joy to find and work with talented people like Iris, and having such variety in our artists ensures we raise the bar each time.”

The Royal Mint is currently running a series of webinars to help engage new artists with coin design, and the first is available to view here: https://www.royalmint.com/collect/webinar/previous-webinars/

The 100 Years of Insulin 50p coin is available to purchase from today at The Royal Mint. 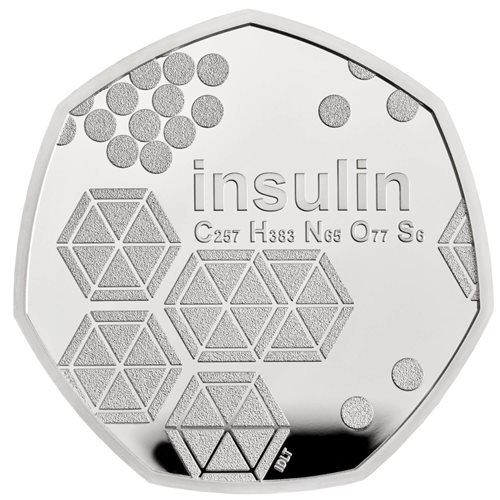 100 Years since the Discovery of Insulin

Celebrate the 100th Anniversary of the Discovery of Insulin