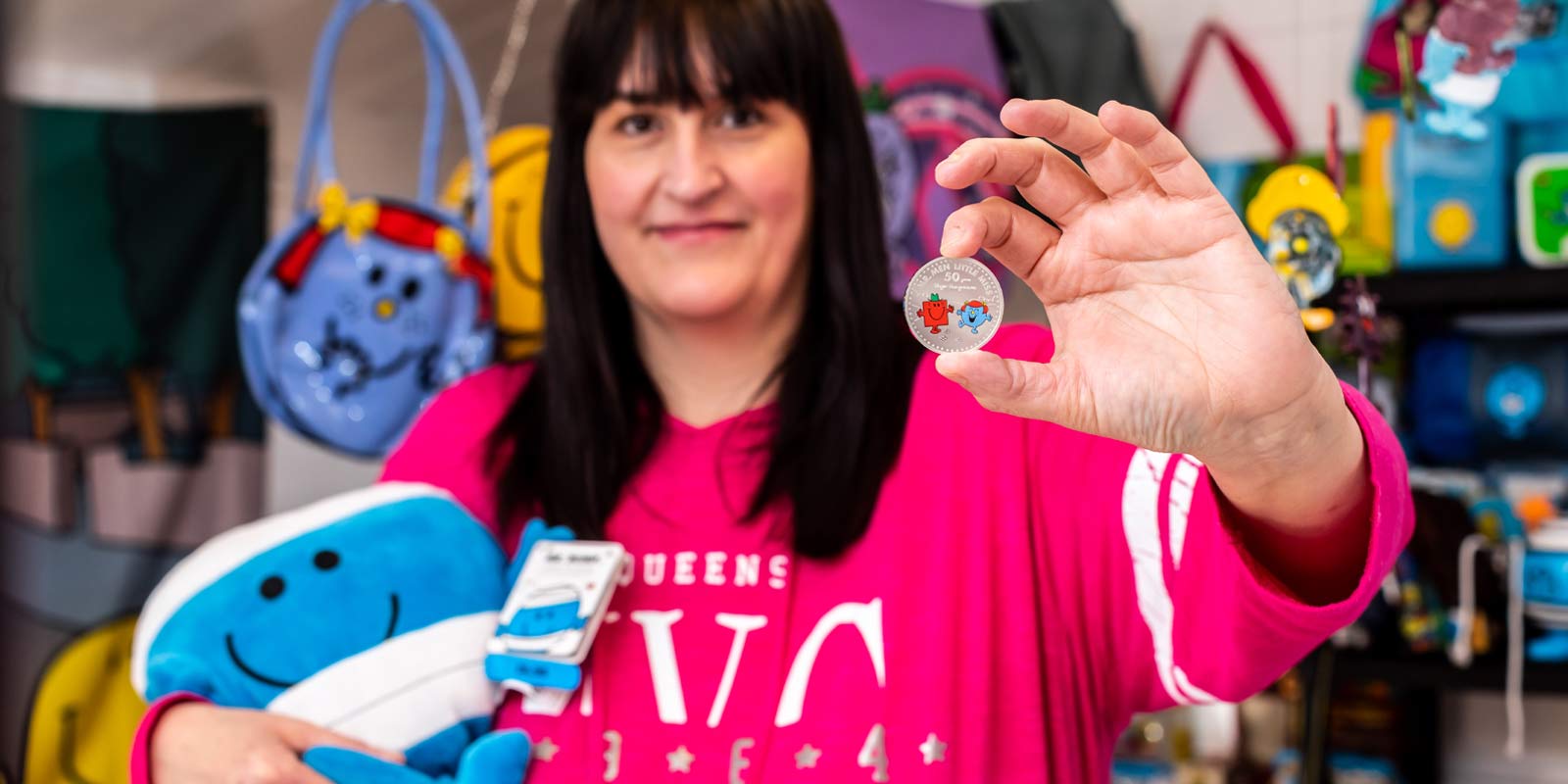 One of the world’s biggest Mr. Men Little Miss fans gave The Royal Mint’s new coin the seal of approval today when she became the first person to own one.  The second coin in the series launched today and features the colourful characters of Mr. Strong and Little Miss Giggles and Michelle Martinez confirms its “beautiful!”

The coins feature the latest colour printing techniques showcasing the characters in vivid colour - capturing their vibrant personalities. The first coin in the series featuring Mr. Happy, has proved incredibly popular with its colourful aesthetic and undeniable charm, and by including such a recognisable and fun theme on the face of a coin, The Royal Mint hopes to inspire more people to take up coin collection as a hobby.

Clare MacLennan, Divisional Director for Commemorative Coin at The Royal Mint comments, “As a business we have seen the success of our childhood character coins grow in popularity and with endearing and appealing themes including Peter Rabbit, Winnie the Pooh and now Mr. Men Little Miss. 50 years since the creation of the beloved Mr. Men characters we are delighted to capture such fun and joy on our latest coin.

“We’ve received positive feedback to the design of our initial Mr. Men Little Miss coin and as we launch the second coin in our new collection, we look forward to even more people taking up coin collecting as a hobby.”

Michelle said, “My mother actually started collecting Mr. Men memorabilia before I was born in 1971 and throughout my childhood, I received Mr. Men themed gifts for Christmases and birthdays. In 2012 the count was over 2000, and when packaged away it was just 45 crates. When it came out of the loft in January 2021 it was 95 crates! I have yet to recount the collection. That is the next mission.

“When I saw the coins were being released by The Royal Mint to celebrate the 50th anniversary, I instantly fell in love; the charming little characters are so vibrant and look right at home on the face of the coins. Although I’ve been a collector of Mr. Men for many years, these are my very first coins. I’m so excited to be adding them to my collection, and already can’t wait to get my hands on the next one! My partner, Stephen, and my parents are actually buying me some more Royal Mint products from the Mr. Men Little Miss Collection for my birthday this year.”

Amongst her collection, Michelle owns a Mr. Happy table lamp, Mr. Greedy Jelly Mould and a Mr. Men tea set with which she served orange squash to her whole family on Boxing Day when she was just six years old. Her favourite item is a Mr. Strong soft toy that she carried everywhere as a child.

All three coin designs in the collection have been created exclusively by Adam Hargreaves, son of creator Roger Hargreaves, to celebrate the characters' 50th anniversary. Since the first publication hit the shelves, the popular series has gone on to sell over 250 million books in 28 different countries worldwide. Translated into 17 different languages, the timeless antics of the Mr. Men and Little Misses remain as popular today as ever.

The second coin in the series featuring Mr. Strong and Little Miss Giggles is available as gold and silver Proof editions, as well as a Brilliant Uncirculated edition and a special colour printed Brilliant Uncirculated edition, exclusively available from The Royal Mint. Visit www.royalmint.com/mrmen to view the full commemorative coin range.  The coin will not be going into general circulation.

Take a nostalgic trip down memory lane with Mr. Men Little Miss as we celebrate the 50th anniversary of this timeless children’s book series.