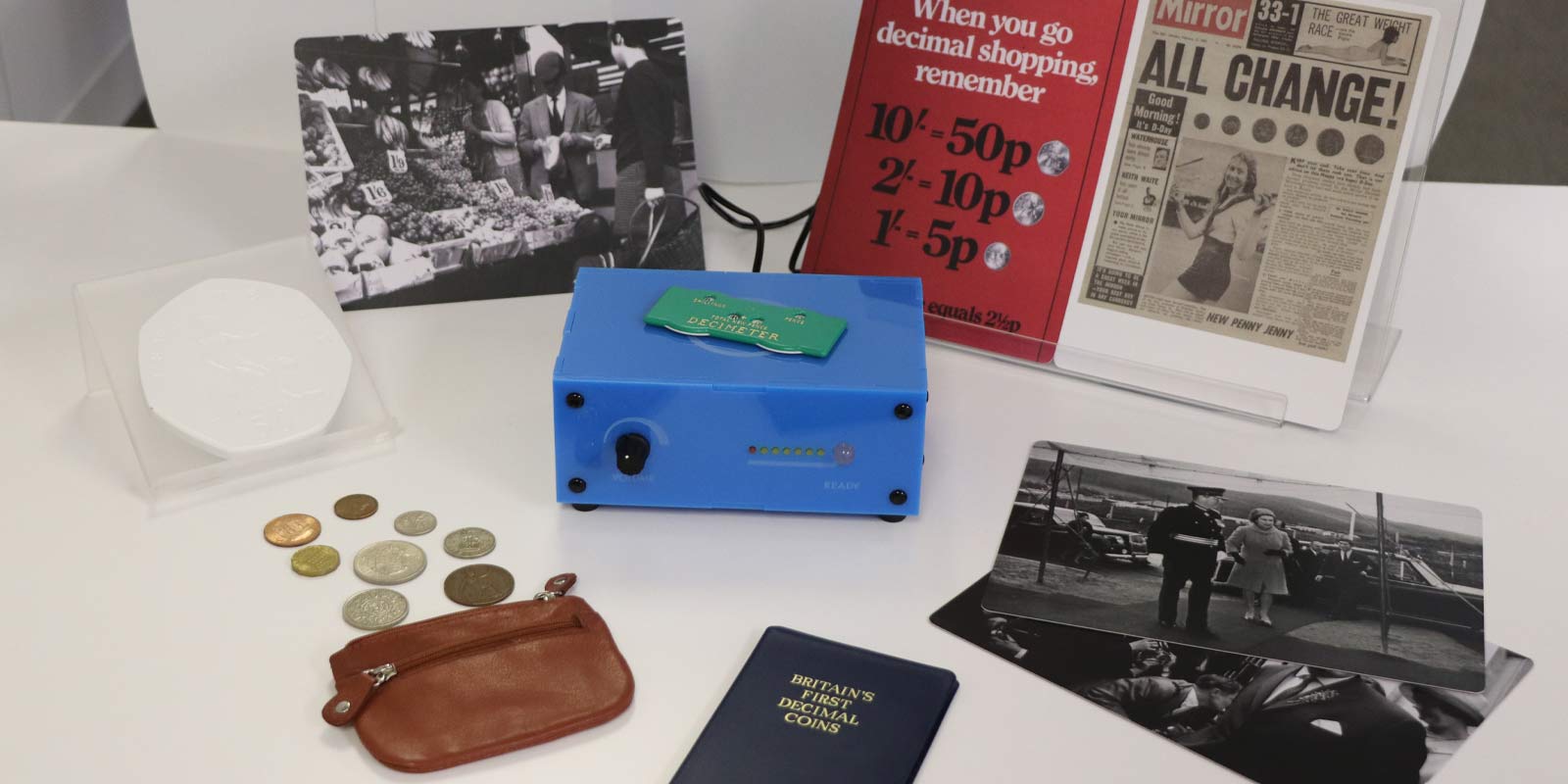 Ahead of the 50th anniversary of Decimalisation, The Royal Mint Museum has launched an innovative ‘Museum in a box’ scheme to help care home residents reminisce about the changeover, and preserve their stories for future generations.

This February marks 50 years since Britain’s currency became decimal - introducing the coins and metrics we use today. Known as ‘D-Day’, for Decimal Day, the change effected the entire nation, bringing people together as they learnt to master a new currency.

To mark the occasion, The Royal Mint Museum has created 45 miniature museums packed with replica and original items from decimalisation – including pre-decimal coins, government posters, and newspapers from 1971. Each object contains a micro-chip which, when placed on the box, plays audio clips and tells an aspect of the story of the changeover. It is hoped the boxes will provide a fun, stimulating activity for people who lived through the period, and an opportunity to talk about their memories.

Dr Kevin Clancy, Director of The Royal Mint Museum, said: “This February marks 50 years since Britain’s currency became decimal, introducing the coins and currency we know today. As one of the most important museums dedicated to telling the story of Britain’s money, we wanted to capture the nation’s experience of decimalisation, and provide an engaging activity for the those who lived through it.

“Each box contains a collection of original and replica objects to bring back memories of decimalisation, and use the latest technology to ‘talk’ to residents. We hope the boxes will help people relive cherished memories, and bring a little fun during these tough times.”

The Royal Mint Museum is making the boxes available to care homes free of charge, with over 1000 sessions available to book in 2021. Each care home will receive a box for two weeks, and they are thoroughly cleaned and disinfected between uses. To register for a ‘Museum in a Box’ please contact: decimalisation@royalmint.com or visit https://www.royalmintmuseum.org.uk/decimalisation/

The Royal Mint Museum is a registered charity, and an accredited museum, which is based on The Royal Mint site in Llantrisant, South Wales. Established in 1816, The Museum has one of the finest collections of coins and related numismatic material in the world. A range of videos and education materials relating to decimalisation is  available at: www.royalmintmuseum.org.uk

About The Royal Mint:

The Royal Mint has an unbroken history of minting British coinage dating back over 1,100 years. Based in the Tower of London for over 500 years, by 1812 The Royal Mint had moved out of the Tower to premises on London’s Tower Hill. In 1967 the building of a new Royal Mint began on its current site in South Wales, UK, to accommodate the minting of UK decimal coinage. Today The Royal Mint is the world’s leading export mint – making currency, collectable coins, precious metal investment products and gifts.

The Royal Mint supports the work of The Royal Mint Museum through its educational programmes, exhibitions, publications and online activities.