The Saints and Strangers of the Mayflower

History remembers the voyage of the Mayflower as the long, cold, storm-tossed journey of a single ship making its way across the Atlantic Ocean, but that wasn’t the way things were supposed to have been. Had everything gone according to plan, the story of the Mayflower would have been much different. So much so that it could possibly not be as significant a part of U.S. history and ethos as it has become.

Today, tens of thousands of Americans proudly trace their roots to the Pilgrims of the Mayflower, but would it be the same if the Mayflower had arrived with a companion ship, having travelled in the relative calm of summer to the already established colony of Virginia? Maybe, maybe not. That is what was supposed to have happened and one could speculate that the experience of having so many things go wrong transformed the Pilgrims. Without those experiences, the cramming of ‘Saints’ and ‘Strangers’ onto a single ship, the delays, the storms, the heartache and the Mayflower Compact, the story might be very different.

The intended companion ship was called the Speedwell. On 22 July 1620, it set sail from the coast of southern Holland with a group of English religious separatists. They had spent the past 12 years living in self-imposed exile, having left England amidst persecution for their criticism of the Church of England. Life in the Netherlands had allowed them to practise their religion freely but it had been hard in other ways. Families found it difficult to make ends meet, and many in the congregation feared a loss of their English way of life. As early as 1617 they had begun planning and dreaming of moving to the Colony of Virginia, which had been chartered in 1606. Life there was hard but it was full of opportunity and it offered a certain freedom from the Church of England’s reach. 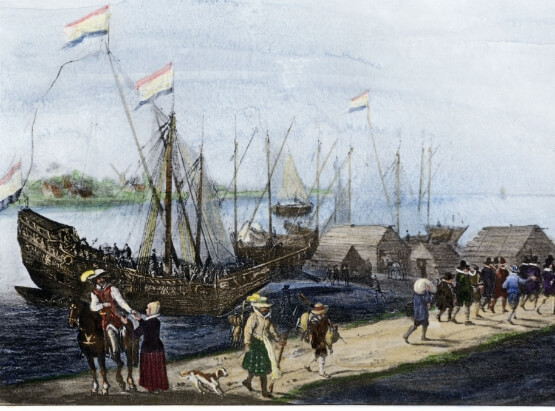 Over the years, many have suggested that either the captain or crew of the Speedwell was less enthusiastic about travelling to the New World than its passengers. By the time the Speedwell arrived in Southampton it had sprung a leak. A week or so was spent doing repairs but it was soon leaking again after setting sail. The two ships were forced to delay their journey further by spending another week or so making repairs in Dartmouth. They eventually got underway once more but leaks appeared yet again and the ships had to turn back and dock in Plymouth. This series of mishaps has led many to believe the Speedwell was being deliberately sabotaged. Whatever the case, the Saints and Strangers of the two ships decided they would continue their journey on just one vessel and 102 passengers were crammed aboard the Mayflower with some 30 members of crew. Space was famously at a premium, with some estimates suggesting that the total living space for all the passengers amounted to just 58 feet by 24 feet.

Together, the Saints and Strangers set sail in early September 1620 and would suffer 66 days at sea, roughly twice as long as expected due to challenging autumn storms. The seas were atrocious and almost every passenger and crew member found themselves suffering seasickness during the voyage. At times, they struggled even to stand. The storms blew them several hundred miles off course, so perhaps it’s no wonder that when the ship finally reached land – off the coast of modern-day Massachusetts – they chose not to travel to the Colony of Virginia. Instead, the passengers decided to build their new lives together in a new place under a new kind of governance: the Mayflower Compact. No longer were they necessarily Saints and Strangers but simply the Pilgrims.