Behind the Design with Matt Dent and Christian Davies

The story of the events that brought about the end of the Second World War, an iconic moment that touched the lives of millions, is told through a £5 coin by Matt Dent and Christian Davies. Matt and Christian met while studying graphic design in Brighton, founding their own design agency Bison Bison in 2011 where they continue to collaborate.

Matt has designed a number of different coins for The Royal Mint, including the 2011 50p coin celebrating 50 years of the World Wildlife Fund, and the 2012 £2 coin commemorating the 200th anniversary of the birth of Charles Dickens. More recently Matt and Christian contributed designs for a three-coin series celebrating iconic super-spy James Bond.

How does this coin differ from the others you have designed?

“It’s the first coin design we’ve undertaken together that commemorates an event. In this case one of the most iconic moments in modern history – the end of the Second World War and the beginning of a new era of peace. It’s also unique in terms of the degree of sentiment the design needs to carry, reflecting the start of a positive chapter in human history after a gruelling war that brought suffering to entire nations and cost the lives of millions of people.”

What was your inspiration for this coin?

“We wanted the design to evoke the same feelings a memorial would, serving as a focus for remembering one of the most significant moments of the recent past. If you look closely, you can see the typography takes inspiration from classical v-cut lettering often found inscribed in stone – just like on war memorials – and the coin’s surface is subtly textured like solid rock.”

How did you go about designing this coin? What did you do to research?

“We started with extensive online image research, leafing through books and libraries of visual material from the period. Then we spent time delving into the Imperial War Museums’ archives and picking the brains of the curators who work there. It was a fascinating, and moving, experience. It’s difficult for those of us who’ve known nothing but peace to properly imagine what the wartime generation went through.”

Talk us through the different elements of the coin.

“The design is based around a typographic intersection between the words ‘war’ and ‘peace’. The design is structured so that the word ‘peace’ dominates the word ‘war’, suggesting that the horror of war has abated and a new era of peace has arrived.”

“Given the events that led to the end of the war, and the fact that this is the last landmark anniversary of the conflict observed with those who were there, we hope to communicate an appropriate sense of gravitas. But at the same time, we wanted to convey positivity, evoking the spirit of reconciliation and reconstruction that followed the war.” 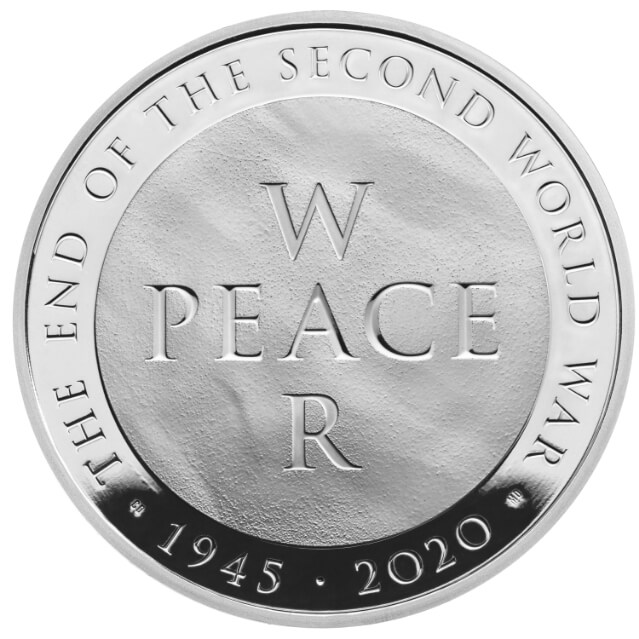