The British spirit of adventure is personified by the historic figure of Captain Cook. As part of our three-year coin series marking the 250th anniversary of Captain Cook’s epic voyage, we’ll look at his journey. We’ll learn more about the challenges that marked his voyage as told to us by Charles Forgan, who volunteers at the Captain Cook Museum in Whitby.

Captain Cook’s Journey (1768–1770) Our story begins on 25 August when Captain Cook, with his famous sense of adventure, set sail from Plymouth on the HM Bark Endeavour. What stands out from the first leg of his journey towards the South Seas?

Newly promoted to commissioned rank as a Lieutenant, Endeavour was an unusual command. Here was a ship that could be managed by a crew of 20 with an additional 90 people packed in like sardines! Perhaps most challenging of all was a disparate collection of nine civilians and a couple of greyhounds on board, led by Joseph Banks who was of a rank and wealth way beyond Cook. In fact, all of the crew were his superior in polite education, but they understood that Cook was in charge.

The search for a reliable way to calculate longitude had lasted decades, but by the 1760s it had almost been solved.  The first stop on the journey was Madeira where the crew stopped to take on food and water as it was common practice to do this at every reasonable opportunity. Cook left Plymouth on 25 August and reached Madeira on 13 September. Had he not stopped to top up at Madeira, he would have been nearly three months at sea before reaching Rio, and it could have taken him even longer to get to the passage of the Atlantic.

The Navy had learnt through bitter experience that if crews were to stay healthy, they had to have fresh food and water.  So Cook stopped at Madeira for five days where he took on board 3,032 gallons of Madeira wine, 10 tonnes of water, 270 pounds of fresh beef, a live bullock, and fresh vegetables, including enough onions to issue 30 pounds for each man. The wine was paid for by a bill of exchange drawn on the Admiralty.

During the expedition, Cook lost a master's mate who got tangled up in the buoy rope and was carried overboard and drowned. He also punished a seaman and a marine with 12 lashes each for refusing to take their allowance of fresh beef.

The second stop was Rio de Janeiro, which was then governed by Portugal, on 13 November. Britain’s relationship at that moment with its ‘oldest ally’ was not at its best and the Governor of Rio de Janeiro was deeply suspicious of Endeavour, so she was placed under restriction.  She wasn’t a naval vessel so she must be a spy-ship! Banks sneaked ashore in disguise to explore the native plants, while Cook wrote pompous letters to the Governor protesting this insult to his Britannic Majesty.  The Governor was quite right though – Cook sent home drawings of the forts and facilities in Rio, as any naval officer would be expected to do!

It was during this leg of the journey that Banks and his party were caught in an unexpected snow storm on the shore, during which two servants died of exposure and the rest of the party were lucky to survive. Despite the tragedy, in January 1769, Cook rounded Cape Horn in good order, entering the Pacific phase of his outward voyage, with promise of further adventures to come. 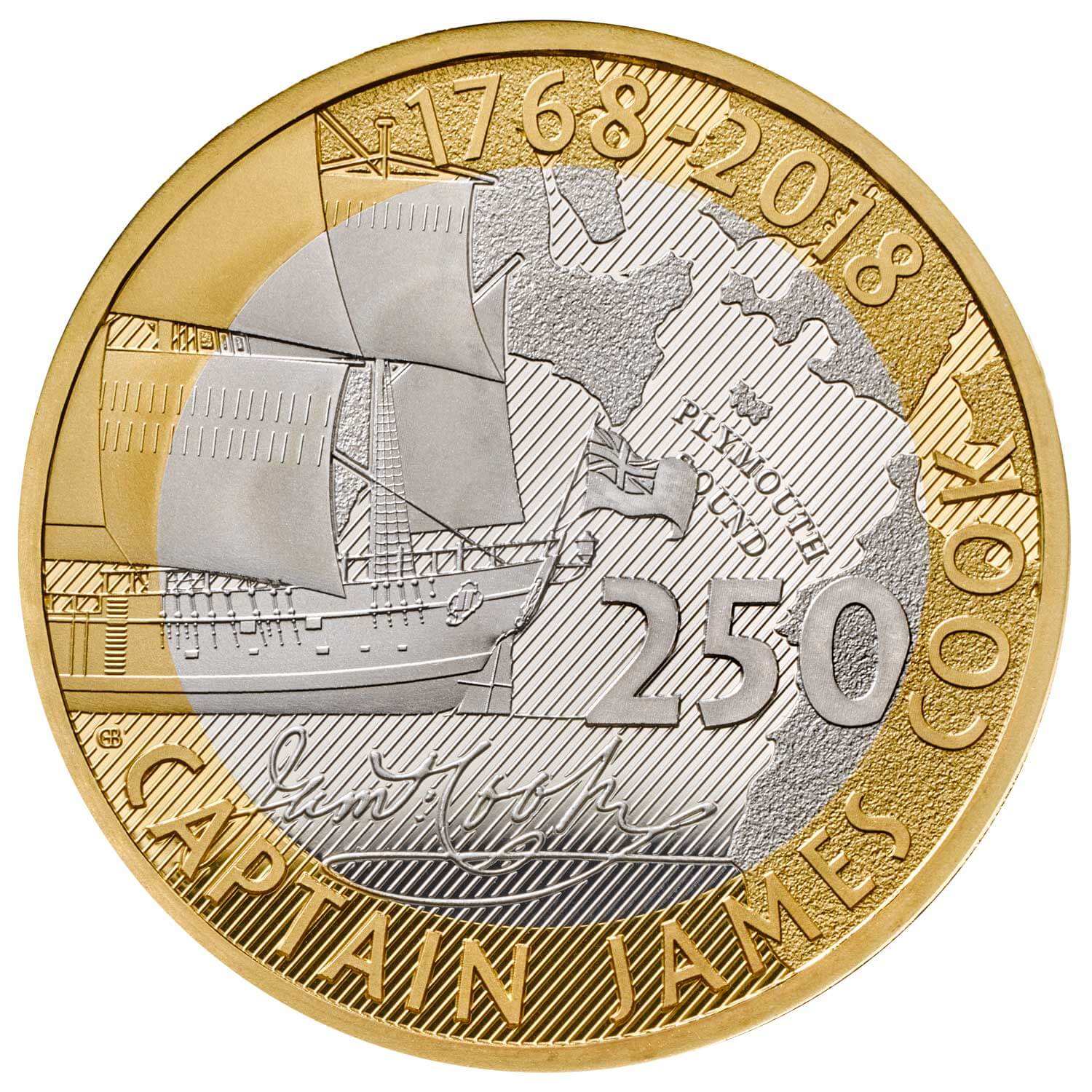 The first coin in the series

The second coin in the three-coin series celebrating Cook’s discoveries features the next piece of Gary Breeze’s puzzle design and charts HM Bark Endeavour’s progress to Tahiti. Here, Cook was tasked with observing the Transit of Venus, an astronomical phenomenon that would transform navigation, as told to us by Charles Forgan, who volunteers at the Captain Cook Museum in Whitby.

After rounding Cape Horn, three months had passed without sight of land. Finally, Endeavour reached the Tuamotus, a scatter of small low islands. Even then Cook had not stopped, anxious to reach Tahiti.

The Dolphin had visited Tahiti two years before, and her Captain had recommended the island as a place to observe the Transit of Venus. Among Endeavour’s crew were old Dolphin hands, who must have told such tales during the long Pacific crossing; excitement must have been at fever-pitch.

At last they had reached their goal. Before them lay an island that seemed like paradise. Forested mountains soared 6,000 feet and ravines and torrents fell to a strip of fertile, inhabited land and sandy beaches.

Canoes surrounded the ship and the chiefs, carrying green branches as emblems of peace, were entertained on board. Hogs, coconuts and other provisions were traded for hatchets, linen and iron nails and the ‘Dolphins’ met old friends.

Islanders helped build a fort to house the observation instruments, sited on a promontory that was named Point Venus. Over six weeks at Matavai Bay, the Transit of Venus was observed not only from the fort but from two further locations. Cook’s mission was a success, and Cook went on to journey around Tahiti, meeting chiefs and mapping as he went.

This was a meeting between two very different cultures with very different views, particularly on property and relationships. Early on when a musket was taken, the thief was shot dead, but Cook did try to avoid violence. However, when scientific instruments were stolen, they had to be recovered. Cook would demand the property back, sometimes even taking canoes and individuals hostage, and later soothed bad feeling with gifts. At the end of the visit two sailors deserted to remain with their girlfriends and fled to the mountains. Their recapture was the most dangerous incident of the whole three months on Tahiti. 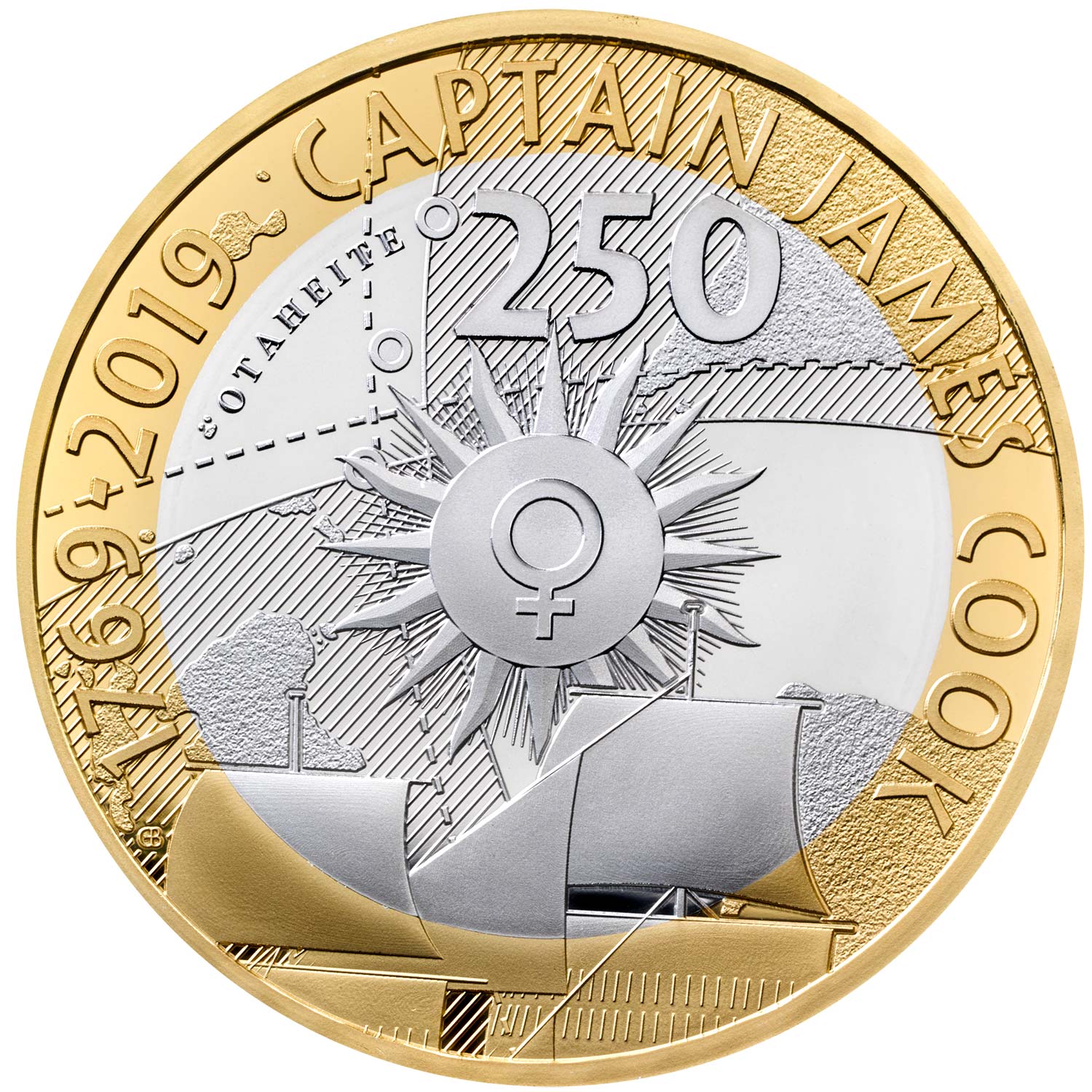 The second coin in the series

Endeavour sailed onwards, her first mission complete, and a high-status individual, priest and navigator named Tupaia was chosen to join the ship. It proved an inspired choice, as the crew discovered when they reached New Zealand.

In August 1769, after observing the Transit of Venus, Captain Cook left Tahiti on the second leg of his momentous voyage. His sealed orders instructed him to seek the Great Southern Continent. He was to search south to latitude 40° and if he found nothing, he was to turn west and fall in with New Zealand, visited by the Dutchman Abel Tasman more than 100 years before. He was then to choose how to return home, either eastwards round Cape Horn or westwards via the Cape of Good Hope. It was his choice to go west and to explore the East Coast of Australia, and to gamble on the existence of the Torres Strait.

After two increasingly cold months at sea, New Zealand was sighted. During the next six months, Cook circumnavigated both islands and charted them with astonishing accuracy despite appalling weather. They did not amount to a Continent.

He chose to return home by the western route, exploring the East Coast of Australia, and his gamble on the existence of the Torres Strait paid off.

He returned with a mass of charts, coastal profiles, botanic researches, and ethnographic knowledge. In one sense, Cook’s greatest achievement was to return home at all!

He surmounted three crises. It was a stroke of luck for Cook that the Polynesian Tupaia chose to join the expedition. In the first disastrous and later more successful contacts with the warrior tribes of New Zealand, Tupaia was the mediator, and it was due to him that Cook was able to tell his old master John Walker that after the first troubles New Zealanders became his ‘very good friends’.

The second crisis was when Endeavour was holed on the Great Barrier Reef. In such circumstances crews might break open the liquor stores but, despite extreme peril, Cook and his officers kept their heads and discipline held. The ship was saved.

The third crisis was in Batavia, modern Jakarta in Indonesia. Despite not losing a man to scurvy, fever gripped the crew, and many died including Tupaia and the artist Sydney Parkinson. It’s not much good being an explorer if you do not get home to tell the tale but despite all, Endeavour returned.

The rights and wrongs of the Cook expeditions are still hotly debated, not least for their ultimate impact on the indigenous peoples of the Pacific, and the challenges they still face.  Unresolved as these questions are, Captain Cook remains a towering figure in history. Supreme amongst navigators, an expert chartist and an instrument of the Enlightenment, Cook and his people left the world with knowledge of the Pacific and its inhabitants where there had been little or none before. It is right that we should celebrate his extraordinary achievement. 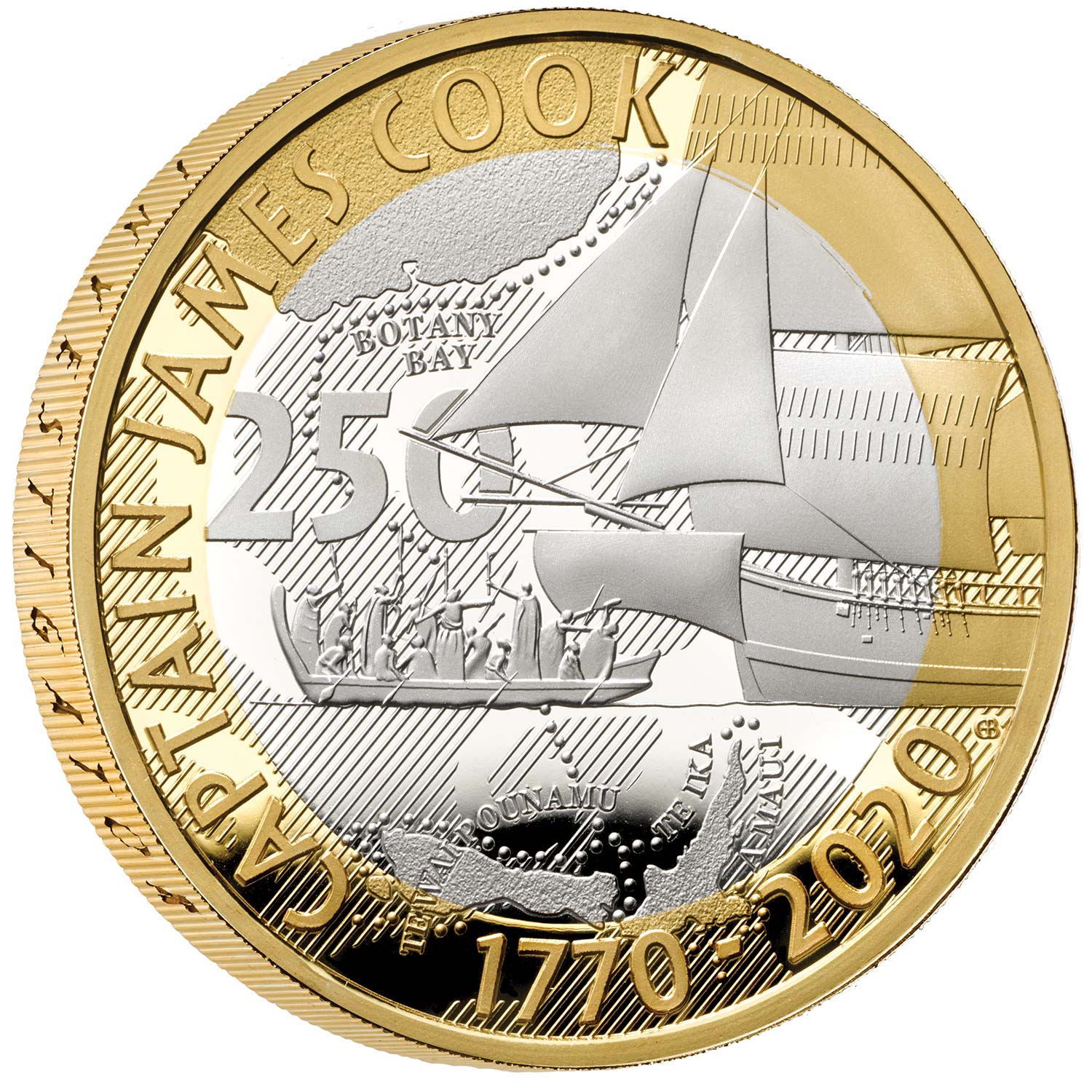 The third coin in the series