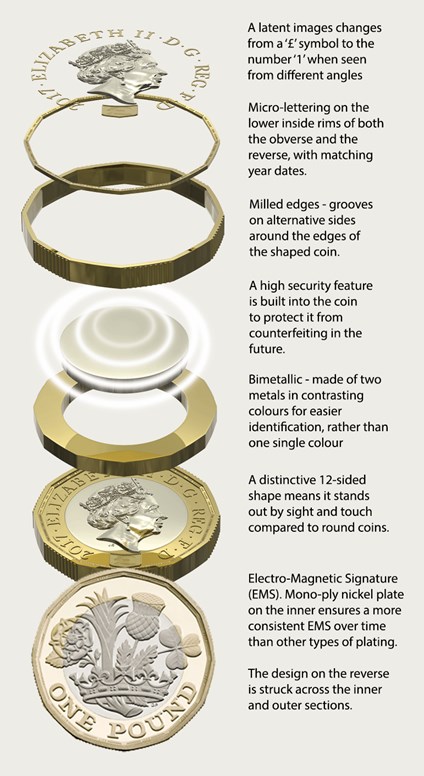 After more than 30 years in the nation’s pockets, the familiar round £1 coin was replaced with an all new, 12-sided £1 coin in 2017. Released on 28 March 2017, the new £1 features a range of overt and covert security features that, when combined, protects it from increasingly sophisticated counterfeit operations, making it the most secure coin in the world.

The final specification of the new 12-sided £1 coin and method of introduction were decided after a ten-week public consultation in 2014. The consultation considered the physical and material characteristics of the coin, as well as the parameters for the transition. To view the government’s published consultation response please visit Consultation Response Paper.

Following the coin’s introduction on 28 March 2017, there was a six-month period when the current round £1 coin and the new 12-sided £1 coin were in circulation at the same time.

Her Majesty’s Treasury and The Royal Mint worked with industry throughout the co-circulation period to introduce the new coin in a manageable way and ensure the smooth return of the old £1 coins.

The round £1 coin lost its legal tender status at midnight on 15 October 2017.

However, the round £1 coin can continue to be deposited into a customer’s account at most High Street Banks in the UK. Specific arrangements may vary from bank to bank, including deposit limits. It is recommended that customers consult with their bank direct.  Round £1 coins can also be donated to a charity.

• The specification of the new £1 coin

• Why the new coin has been introduced