Peter Rabbit™ Coins
Behind the Design

Find out more about the original Beatrix Potter™ illustrations appearing on a 50p from designer, Emma Noble.

It was the task of Royal Mint coin designer and engraver, Emma Noble to bring the coin designs to life. While the coins are available in the plain-metal circulating and Brilliant Uncirculated versions, they are also available in colour-printed Silver Proof versions, which allows for a new perspective. Emma has made sure that Beatrix’s characters are instantly recognisable, with every whisker, spine or feature captured in fine detail, while the colour printing allows the designs to reflect the style of the original, much-loved illustrations. 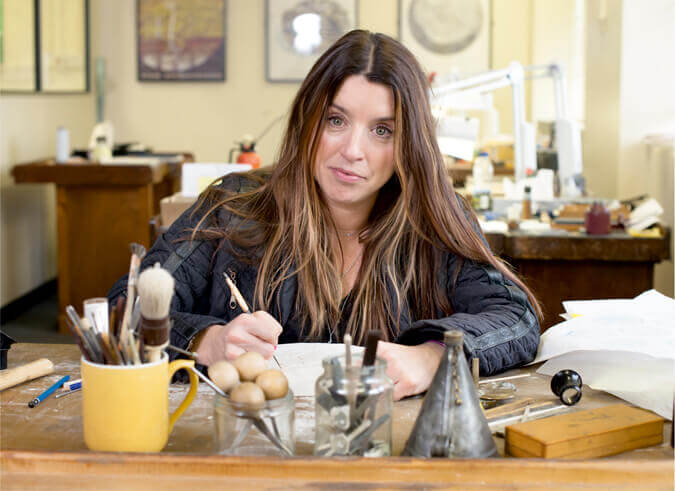 So, first and foremost, tell us a bit about yourself

“My name is Emma Noble, I am a member of The Royal Mint’s team of engravers and I am the designer behind the Beatrix Potter™ coin series.”

“I have worked at The Royal Mint for 19 years and have designed coins for several commemorative UK coins, such as the diamond wedding anniversary of Her Majesty The Queen and His Royal Highness The Duke of Edinburgh, The 60th Anniversary of The Queen’s Coronation and most recently The 1966 FIFA World Cup coin, marking fifty years since England won the World Cup.”

How did you feel about designing the coin to mark this significant anniversary / event?

“It is amazing to be given the opportunity to work with such famous and treasured literary characters. I really hope people are pleased with them as a set.”

How did you go about designing these coins? Talk us through the process…

“I initially draw small sketches and ideas out roughly to see what looks best and what sort of layout works. I need to think about the amount of detail and the inscription on the coin; we pay great consideration to the legibility of the design as it is greatly reduced to coin size. I then decide which design layouts work best and draw them up properly.” 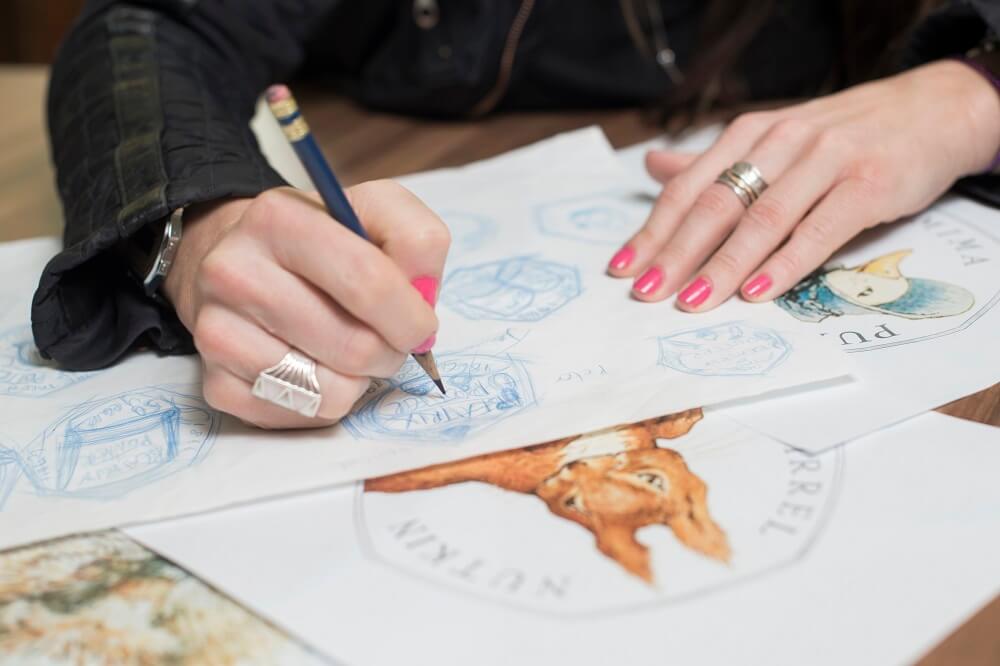 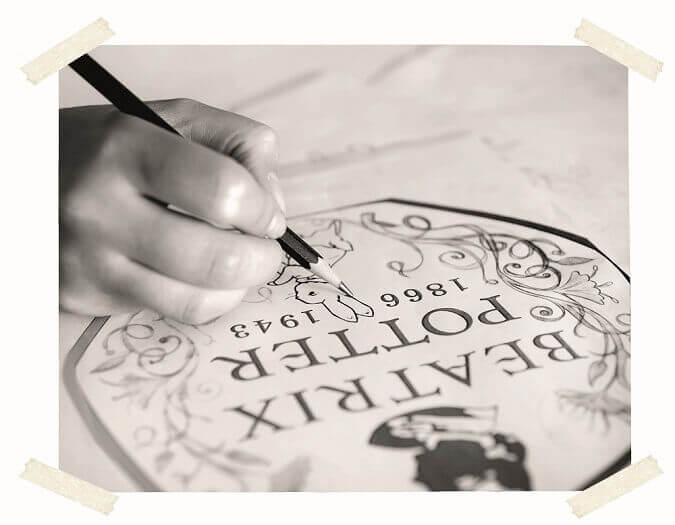 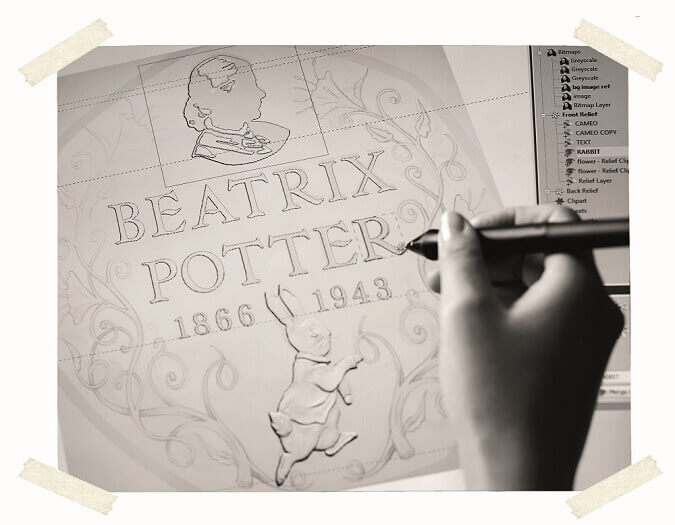 “Then, I take my design and carve it on to plaster so that it’s three dimensional. It is very low relief but I have to make it as close to the original design as possible.”

“My favourite coin from the collection has to be Peter Rabbit™ as he is the most instantly recognisable and iconic character. I really like the colours and think that he has a great silhouette. The most difficult to design was Mrs. Tiggy-Winkle as she doesn’t have as much shape so I had to spend longer working on this design”

Which coin is your favourite and was the most difficult to design?

“My favourite coin from the collection has to be Peter Rabbit™ as he is the most instantly recognisable and iconic character. I really like the colours and think that he has a great silhouette. The most difficult to design was Mrs. Tiggy-Winkle as she doesn’t have as much shape so I had to spend longer working on this design”

Talk us through the different elements of the coin designs

“I wanted to put Beatrix Potter’s illustrations to the forefront of my designs as they are lovely images and the characters are very well known. I felt they were strong enough to stand alone and I designed them in this way as I thought they would work best for both the coloured commemorative coins and plain-metal circulating coins.”

What was the most challenging aspect of the designs?

“Designing a coin for colour printing is particularly challenging, but the technique can help to bring a design to life, highlighting elements and adding a new perspective. For the Beatrix Potter™ series, I tried to carefully reflect the delicate water-colour style of the original, much-loved illustrations, created with such care and attention-to-detail by Beatrix herself.” 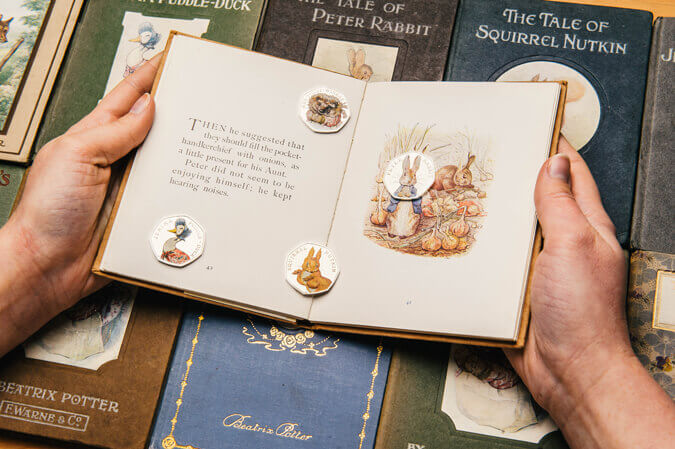 Tell us something we don’t already know about the design… this could be a quirk in the design? Maybe a particular element that took a while to perfect? Or maybe something that happened while designing it?

“I had to pay a lot of attention to Peter Rabbit’s whiskers as details as fine as they are tends to wear off during production if they are too weak or undefined.”

How did you want your design to be received? And so far, has it been received as well as you’d hoped?

“It’s been a very popular set so I’m extremely pleased that people like the series.”

“I have found one Peter Rabbit™ 50p in my change so far, and I am looking forward to finding the other designs when they enter circulation later this year.”