Discover More About Britannia and the Romans | The Royal Mint

Britannia and the Romans

Britannia and the Romans 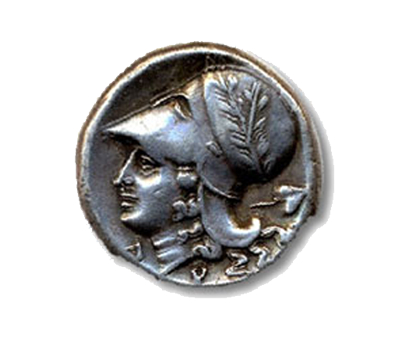 The tradition of using the image of a powerful woman to depict a country goes back centuries. Even in pre-Christian times, the city of Athens was personified by Athena, the Greek goddess of wisdom and war.

The Romans also used strong maidens to personify their territories and conquests. When they invaded Britain, they used Britannia to depict the colonised country on their coins.

Britannia first appeared on Roman coins around 119 AD, during the Emperor Hadrian’s reign. Hadrian spent most of his reign touring the Roman Empire and strengthening its borders. The wall that he ordered to be built on the Scottish borders still bears his name today.

Hadrian’s Britannia wore flowing robes and held a spear and shield. She was seated on rocky crags, which probably represented the invaders’ first view of the island.

On Hadrian’s coins, Britannia looked like she was being held captive. The writer Marina Warner compared her to a ‘pensive, even forlorn goddess… fallen before the might of the Roman Empire.’

A symbol of the mastery of the seas

Britannia didn’t appear on British circulating coins again until the 1672 – 14 centuries after the Romans had left our shores. This time she was a useful symbol for Charles II.

Yet this Britannia wasn’t a warmonger. The olive sprig in her right hand symbolised her love of peace. It also harked back to the ancient past. Legend had it that Athena gave the first olive tree to her city of Athens.

In modern times, Britannia remains the universally recognised personification of Britain. She still stands proud on our coins today, and features on some of the United Kingdom’s highest denomination coins.

On the sestertius of Antonius Pius (138–161 AD), Britannia holds a spear and spiked shield.