Queen Elizabeth II is the great-great-granddaughter of Queen Victoria and it appears that while some things run in families, others definitely do not.

Both Queens took the throne at a young age, and both celebrated Diamond Jubilees - something that had never happened in over 1,000 years of monarchy and which is very unlikely to happen again in our lifetimes. But what other similarities and contrasts do their lives contain? 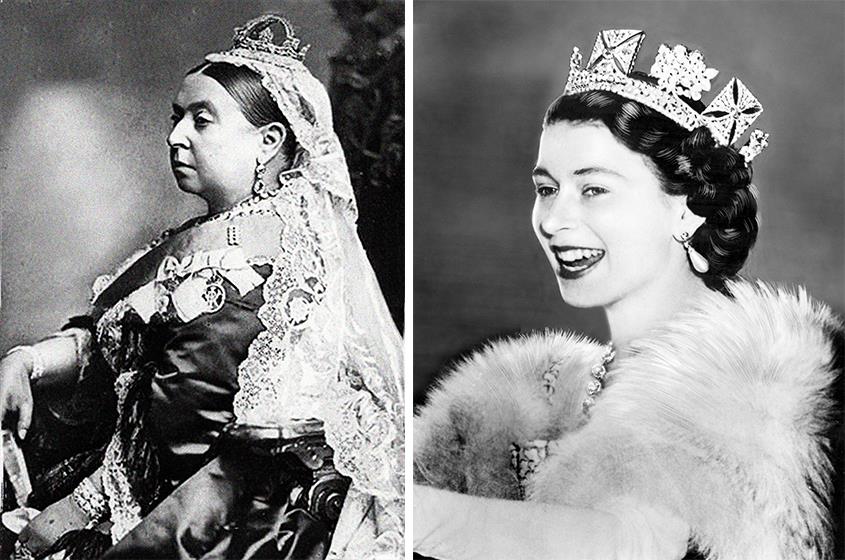 It’s 1939 and Prince Phillip is a cadet at Dartmouth Naval College. King George VI is visiting and the dashing Philip is assigned to entertain his daughters. Phillip makes a lasting impression on the 13-year-old Elizabeth and they begin writing to each other.

By the summer of 1946, Phillip had asked Elizabeth to marry him. She accepted, even before talking to her father. Luckily the King granted his request.

By contrast, the idea of marriage between Albert and Victoria was her ambitious uncle, Leopold, King of the Belgians’, idea. He engineered a meeting between the two. On this occasion, Victoria was amused.

She wrote, "[Albert] is extremely handsome; his hair is about the same colour as mine; his eyes are large and blue, and he has a beautiful nose and a very sweet mouth with fine teeth; but the charm of his countenance is his expression, which is most delightful."

As she was the Queen, and Albert only a prince, Victoria proposed to him on 15 October 1839. Of course, he accepted.

A plethora of prime ministers

Victoria saw ten prime ministers come and go during her reign. And that’s just in the UK. If you include New Zealand, Canada and Australia, the total goes up to 33.

It was Albert that convinced Victoria to rise above politics. Previously she had become very personally involved. In fact, Melbourne remained in office despite defeat, purely due to Victoria’s stubbornness.

The current Queen has already beaten Victoria’s total with 13 UK prime ministers. Or 157 if you count the current commonwealth realms.

From the Empire to the Commonwealth

On 1 January 1877 Victoria became Empress of India. It was just one of the Empire’s countries she was never to visit. By the end of her reign the Empire included Canada, Australia, New Zealand and parts of Africa.

By the end of World War II, Britain’s wealth, power and authority had been seriously impacted. Many countries declared independence but freely joined the Commonwealth.

In contrast to Victoria, The Queen has visited every Commonwealth country.

Between them they have reigned for over 120 years, witnessed dramatic social, economic and technological changes. Endured war. Found love. And shepherded their country with the same sense of duty and honour.

This iconic design was the inspiration for the Queen's Diamond Jubilee Official UK £5 coin released in 2012. The legacy is clear.

Today, The Royal Mint strikes special coins to commemorate great moments in The Queen's reign. Coins for the Diamond Jubilee and the coronation are collected by thousands of people and The Royal Mint's place in British life continues to be as strong as ever.