Benedetto Pistrucci was born in Rome on 29 May 1784. While working in Italy, he gained a reputation as an outstandingly talented gem engraver. His fame spread far and wide and he was invited to come to England by the Prince Regent, the son of George III.

While he was in London, Pistrucci was introduced to William Wellesley Pole, the Master of the Mint. Pole commissioned him to create designs for the new gold and silver coins of George III. Pistrucci also went on to engrave the coin portrait of the Prince Regent when he became George IV.

However, he is probably best known for his magnificent Waterloo Medal and his St George and the dragon, which was created for the new gold Sovereign of 1817. In fact, Pistrucci’s design of St George was so popular that it was also used for the gold five-pound piece and silver crowns during George IV’s reign.

After creating the medals, Pistrucci chose to make England his home and spent most of the rest of his life here. He died at his home near Windsor on 16 September 1855.

St George and the dragon

While he was in London, Pistrucci was introduced to Lady Spencer who inspired him to create his most famous work. Her Ladyship showed him a model of St George and asked him to make another ‘in the Greek style.’

Lady Spencer wanted something different from the traditional image of St George dressed in medieval Gothic armour; it was music to Pistrucci’s ears. His motto was ‘Study Greek originals day and night,’ and he was delighted to take up Lady Spencer’s commission.

Legend has it that while Pistrucci was working on Lady Spencer’s commission, he suggested that St George would be a suitable subject for England’s new Sovereign coin. The idea appealed to William Wellesley Pole, Master of the Mint, who decided that the patron saint of England would make the ideal reverse for the new gold coin.

For a fee of 100 guineas, Pistrucci provided a jasper cameo of St George, using an Italian servant as his model. The resulting design combined grace with dramatic impact and, to this day, experts hold it up as a masterpiece of numismatic design. 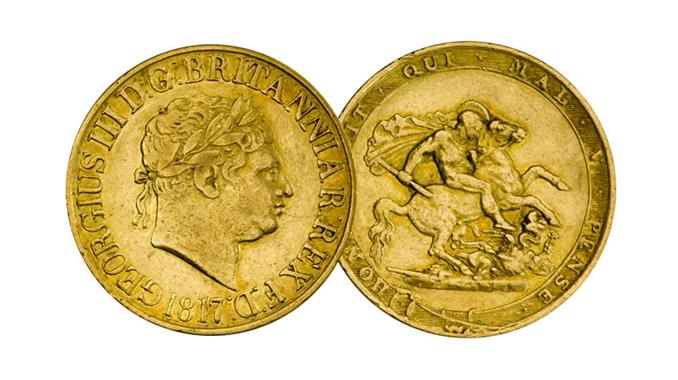