When The Royal Mint first commemorated this iconic writer, it was little surprise that Peter Rabbit™ was one of the most popular characters in the Beatrix Potter™ 50p collection. Each year, the lovable rabbit has been depicted in a different scene that represents one of his daring adventures.

Each year since the first coin set, Peter has been joined by a range of other familiar faces. Beatrix Potter is famous for writing and illustrating 23 little tales, filled with characters that have enchanted readers for more than a century. Jeremy Fisher, Benjamin Bunny and Tom Kitten are three such characters, and were celebrated on the 50p coins released in 2017.

In 2018, the faces to join our popular Beatrix Potter™ series were Flopsy Bunny, Mrs Tittlemouse, and the helpful mouse from The Tailor of Gloucester alongside the 2018 Peter Rabbit™ coin!

The Famous Rabbit in the Little Blue Coat

Peter Rabbit™’s mischievous visits to Mr. McGregor’s garden lead to all sorts of trouble for the little bunny – but he can’t seem to resist the delicious vegetables the gardener grows! Radishes are perhaps his favourite, and the 2018 Peter Rabbit™ 50p shows him munching on the treat just as he does in ‘The Tale of Peter Rabbit™’, the first book in the series that was published.

Beatrix Potter™ had a pet bunny called Peter Piper as a child – he was her second rabbit after Benjamin Bouncer, who became famous in his own tale, Beatrix’s fourth book. Peter appears in six tales altogether, revisiting Mr. McGregor’s garden with his friend Benjamin Bunny. He also makes an appearance in ‘The Tale of the Flopsy Bunnies’, now with a more grown-up approach to gardening. In the tale, Peter Rabbit™ has his own vegetable patch where he grows cabbages, although not enough to feed the Flopsy Bunnies!

“As there was not always quite enough to eat, Benjamin used to borrow cabbages from Flopsy's brother, Peter Rabbit™, who kept a nursery garden. Sometimes Peter Rabbit™ had no cabbages to spare.”

When The Royal Mint created a collection of 50p coins to celebrate the birth of Beatrix Potter™ in 2016, it’s perhaps not surprising that Peter Rabbit™ was one of the most popular coins in the series. Since then, Peter Rabbit™ has been depicted in a different scene each year, followed by characters from the tales on their own coins. Peter Rabbit™ appeared in the first of Beatrix Potter™’s little tales and his daring adventures set the scene for the stories that would follow. The love of these ‘small books for small hands’ has been passed down through generations of readers, and are as popular as ever across the world today.

The Peter Rabbit™ design for 2018 is of the famous image of Peter Rabbit™ munching on radishes taken from Mr. McGregor’s garden. The iconic illustration is brought to life with colour printing on this sterling silver coin, which is finished to our finest Proof standard. Each coin comes in a clear acrylic presentation case for safekeeping and is accompanied by information on the character and quotes from Beatrix’s original tales. 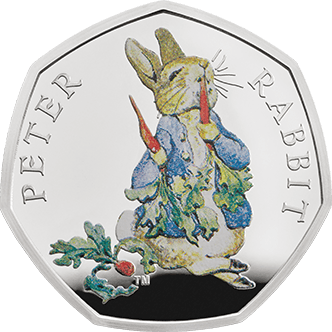 When we first meet Peter Rabbit™ in Beatrix Potter™’s first tale, we also meet his sisters – Flopsy, Mopsy and Cotton-tail. When the little rabbits grow up, Flopsy Bunny marries Benjamin Bunny, and they go on to have lots of baby bunnies of their own.

The little bunnies are always hungry and never far from trouble. In ‘The Tale of the Flopsy Bunnies’ they happily munch lettuce until they fall asleep and just miss being made into a cloak by Mrs. McGregor. It is Mrs. Tittlemouse who saves them, and at Christmas she is rewarded with “enough rabbit-wool to make herself a cloak and a hood, and a handsome muff and a pair of warm mittens.”*

Flopsy and Benjamin’s children have another narrow escape in ‘The Tale of Mr Tod’, when the badger, Tommy Brock, carries off the newborn rabbits to make a pie. Peter Rabbit™ joins his cousin, Benjamin, to rescue the little ones, but it is a scuffle between the fox, Mr. Tod, and Tommy Brock that lets them escape!

*Text from ‘The Tale of the Flopsy Bunnies’ courtesy of Frederick Warne & Co.

The love of Beatrix Potter™’s ‘small books for small hands’ has been passed down through generations, delighting readers across the world to this day. Following the success of ‘The Tale of Peter Rabbit™’, the author and illustrator returned to rabbits for several of her little tales, knowing the adventurous bunnies were firm favourites with her young readers. Flopsy Bunny is the third rabbit, following Peter and Benjamin, to be featured on a UK 50p coin, continuing our series celebrating the life and work of Beatrix Potter™.

For this new coin Flopsy Bunny is pictured wearing her recognisable little cape, which has been highlighted by colour printing. The coin has been struck in sterling silver and finished to our pristine Proof standard. This is part of a Limited Edition Presentation and comes in a clear display case with a booklet exploring the world of the Flopsy Bunnies.

Just like the old fairy tale of ‘the elves and the shoemaker’, the Tailor of Gloucester is helped by some grateful friends. He is trying to finish a very important outfit for the Mayor of Gloucester in time for Christmas Day and, although he cuts the cloth, he is too tired and ill to finish the task.

When the tailor goes home he saves some little mice from his cat, Simpkin (to the cat’s horror!). The tailor tosses and turns in his sickbed for three days and nights, but when he enters his shop again he finds the Mayor’s fine, cherry red coat, beautifully finished by the thankful mice.

Beatrix Potter™’s version of the tale is inspired by the real story of John Pritchard, whose staff completed a suit for the Mayor of Gloucester overnight. The tailor, however, said that he returned to his shop and found that fairies had finished the work. Beatrix heard the story on a visit to Gloucestershire, and created her own version, which she gave in letter format to Freda Moore, the daughter of her childhood governess.

Because you are fond of fairy-tales, and have been ill, I have made you a story all for yourself—a new one that nobody has read before. And the queerest thing about it is—that I heard it in Gloucestershire, and that it is true—at least about the tailor, the waistcoat, and the "No more twist!"

The Tailor of Gloucester™

Beatrix Potter™’s timeless stories and illustrations have captured the imagination of generations of readers, following the adventures of her charming creatures with big personalities throughout 23 little tales. In 2016 we began a celebration of the life and work of the ever-popular Beatrix Potter™; ‘The Tailor of Gloucester’ is the latest tale to be celebrated in this year’s collection.

The design captures the narrative of the tale with an iconic image from the book. One of the helpful little mice sits cross-legged on a reel of ‘twist’, complete with miniature spectacles and a newspaper. Beatrix Potter™’s original illustration is faithfully captured with colour printing on this sterling silver coin, which is finished to Proof standard. Part of a Limited Edition Presentation of just 30,000, each coin comes in a clear acrylic presentation case with a booklet filled with more information on the inspiration behind the story. 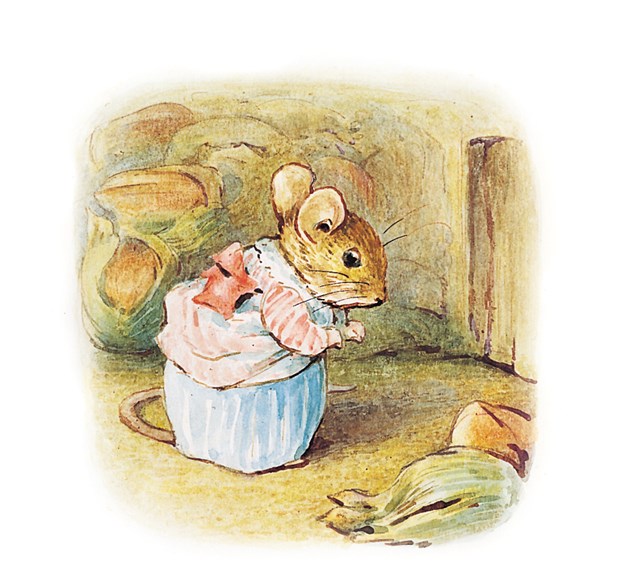 The very particular little wood mouse we meet in ‘The Tale of the Flopsy Bunnies’ also appears in her own story, Beatrix Potter™’s sixteenth book. She is very house proud, which is a difficult thing to be in the countryside. The little mouse’s struggle to keep her home clean and free from unwanted visitors gave Beatrix the chance to create beautiful and delicate drawings of spiders, bees and other insects. Mr. Jackson, the toad, is the unlikely hero when he rids Mrs. Tittlemouse’s home of some bees, including Babbitty Bumble. Although she is grateful, she later works hard to make her doorway too small for Mr. Jackson to pay another visit!

“He met Babbitty round a corner, and snapped her up, and put her down again.

“I do not like bumble bees. They are all over bristles,” said Mr. Jackson, wiping his mouth with his coat sleeve.

“Get out, you nasty old toad!” shrieked Babbitty Bumble.”

Text from ‘The Tale of the Flopsy Bunnies’ courtesy of Frederick Warne & Co.

In her little tales Beatrix Potter™ created a wonderful world inhabited by a variety of charming creatures. The characters have become familiar friends at bed time and their adventures in the British countryside continue to win the hearts of new generations of readers. In 2016 we began celebrating the life and work of Beatrix Potter™ and each year the new coins have been eagerly awaited. Now, Mrs. Tittlemouse is the latest character to join the popular series.

This is the first time Mrs. Tittlemouse has featured on an official UK coin and she takes centre stage. Every tiny detail of Beatrix Potter™’s original illustrations of the unlikely heroine has been captured by our Brilliant Uncirculated finish. The coin comes in a fold-out case, inspired by Beatrix Potter™’s own watercolour illustrations, including more details about the inspiration behind the world of Mrs. Thomasina Tittlemouse. 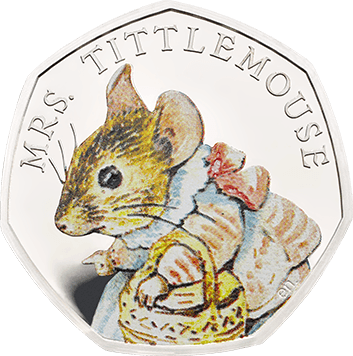