Over the years The Royal Mint has marked the anniversaries of some of the most epic battles in Britain’s history.

This timeline charts the pivotal moments, commemorated on coins struck by The Royal Mint, that have altered the course of history.

On 14 October 1066 the invading forces of William, Duke of Normandy defeated King Harold’s army. William’s victory at the Battle of Hastings ended Anglo-Saxon rule and paved the way for the Norman conquest of England. The 950th anniversary of the Battle of Hastings was marked in 2016 with a 50p coin reverse design by John Bergdahl. 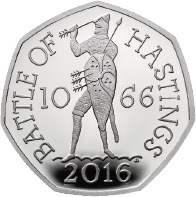 On 25 October 1415, Henry V led his troops to England’s most celebrated triumph of the Hundred Years’ War. Outnumbered, tired and decimated by disease, the English army, aided by its archers, defeated the French whose heavily armoured knights became bogged down in the thick mud. The 600th anniversary of this pivotal battle was commemorated on a £5 Alderney coin featuring a reverse design by Glyn Davies. 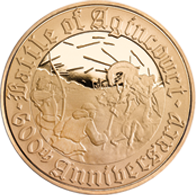 Britain’s most famous naval triumph took place off the south-west coast of Spain in 1805 at the height of the Napoleonic Wars. Twenty-seven British ships led by Admiral Lord Nelson aboard HMS Victory defeated 33 French and Spanish vessels. Nelson’s unconventional tactics helped carry the day, but he was shot by a French musketeer and died just before the battle ended. The 200th anniversary of Nelson’s finest hour was marked in 2005 with a design by Clive Duncan on a £5 coin. 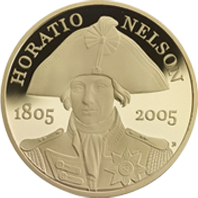 The British army commanded by the Duke of Wellington, reinforced by the Prussians, defeated the French army led by Napoleon Bonaparte on the 18 June 1815 at Waterloo. The battle was in the balance for most of its duration, but victory brought a conclusive end to the Napoleonic wars. Napoleon was forced to abdicate and lived out the rest of his days in exile in St Helena. The 200th anniversary of the Battle of Waterloo was commemorated in 2015 on a £5 coin featuring a design by David Lawrence. 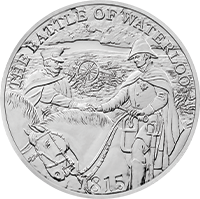 The first day of the Battle of the Somme is the darkest in Britain’s military history. A big push was conceived to break through German lines but heavy shelling failed to take out the German positions. When the advance came, British forces, including the Pals Battalions in action for the first time, suffered horrifying casualties in a hail of machine-gun fire. Over 57,000 men were killed or wounded in a single day. The Royal Mint marked the 100th anniversary of the Battle of the Somme in 2016 with a £5 coin featuring a design by John Bergdahl. 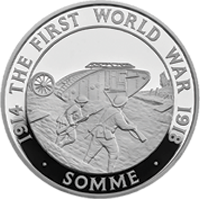 For three months during 1940, the Royal Air Force (RAF) defied Goering’s Luftwaffe to stave off the threat of invasion. Making good use of the world’s best radar network, unrivalled Spitfire fighter planes, and helped by Hitler’s mistake of switching focus from strategic to civilian targets, the RAF carried the day. Without control of the skies, Hitler was unable to launch his planned seaborne invasion. The 75th anniversary of the Battle of Britain was commemorated in 2015 on a 50p coin with a design by Gary Breeze. 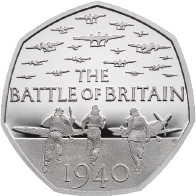 In a bid to turn the tide of the Second World War and defeat Nazi Germany, the Allies decided to open a second front. They conceived D-Day, the largest amphibious assault in military history. Allied forces stormed five Normandy beaches codenamed Utah, Omaha, Gold, Juno and Sword in a bid to break through a series of defences known as the ‘Atlantic Wall’. Stephen Taylor’s aerial view of the planned attack features on the £2 coin struck to mark the 75th anniversary of D-Day in 2019. 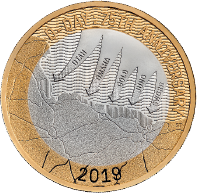