When an explosion in a quarry near Maidstone in 1834 revealed fragments of an ancient skeleton, Mantell was finally able to conceptualise what Iguanodon might have looked like. One of the first dinosaurs ever discovered, it would play a crucial role in forming our understanding of these amazing creatures.

The Dinosauria Collection continues with the latest coin in the series celebrating the achievements of Richard Owen, the scientist who defined dinosaurs and later founded the Natural History Museum to share the wonder of these awe-inspiring creatures.

Featuring a design by palaeo-artist Robert Nicholls who specialises in producing anatomically accurate reconstructions of natural history specimens, it shows Iguanodon, one of the three creatures that Owen linked to form his new taxonomic group. Designed with the expert guidance of the Earth Sciences Department of the Natural History Museum, it is available as a limited-edition gold and silver Proof, colour-printed silver Proof, colour-printed Brilliant Uncirculated exclusive to The Royal Mint and standard Brilliant Uncirculated edition. 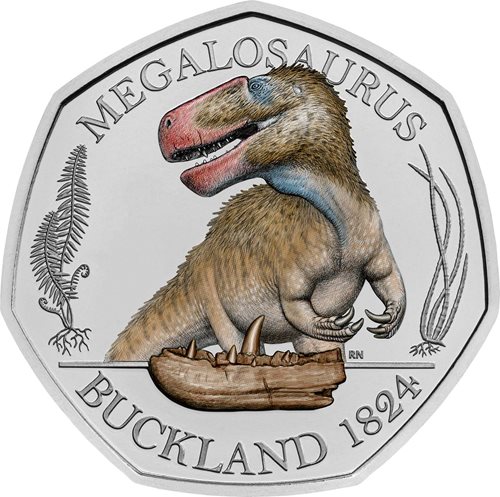 Britain has a fascinating fossil record. Around 50–60 different species have been found here, including Hylaeosaurus, the first armoured dinosaur ever discovered. Together with Megalosaurus and Iguanodon, it played a crucial role in forming our understanding of these long-extinct creatures.