Browse a selection of the latest historic coins
Discover more

Behind the Design with Chris Facey

Bohemian Rhapsody was a smash hit on its release in 1975, securing the coveted Christmas number one spot. It would remain at the top of the singles chart for nine weeks and cement Queen’s status as the biggest band in the world. But in 1992 it was given a new lease of life when it featured in the hit movie Wayne’s World, propelling it back into the charts and putting it onto the radar of a new generation of music fans. Amongst them was Chris Facey, the designer behind this Queen coin.

Chris is a Product Manager at The Royal Mint. After studying at the University of Glamorgan, he set up his own product design consultancy before going on to work in the toy and confectionery industries. Chris joined The Royal Mint in 2018 and this is his first coin design.

“My parents were Queen fans and I remember hearing their songs on the radio, but it was watching Wayne’s World for the first time that really switched me onto the band. Of course the scene where Wayne slips the cassette into the tape deck and starts head banging along with Garth and their friends crammed into that tiny blue car is hilarious. But you also realise what a great song Bohemian Rhapsody is. An extraordinary fusion of rock and opera that just lifts you up and carries you away with it. Yes, it’s absurd and over the top, but it’s also utterly joyous and magnificent. It’s like nothing else you’ve ever heard. Even today it’s never off the radio and, like many other people, I’ve belted it out at karaoke; sadly, failing to do justice to one of the most iconic songs of all time.

“Watching the recent movie biopic was a great source of inspiration. I especially love the scene where the band insist Bohemian Rhapsody is released as a single with no cuts. During an era when the average single was three minutes long, they were dead set on putting out a six-minute track with an opera in the middle. The chutzpah is just extraordinary. The reaction of the record company suit, (Mike Myers in a nice call back to Wayne’s World), to a song that features characters from Italian classical theatre, quotes from the Quran and the demon Beelzebub, is priceless. I love the band’s creative fearlessness and hope I’ve been able to capture some sense of it in my design. 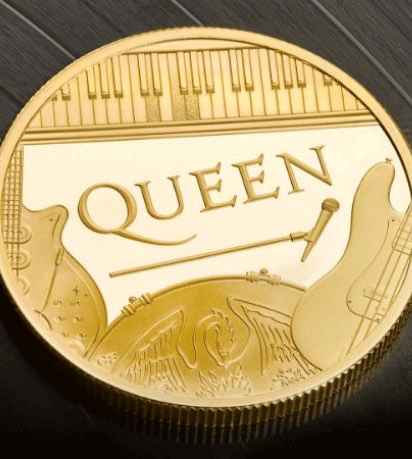 “When I was researching the band for my coin design what I was struck by was this sense of musical democracy. All four members of the classic line-up were equals and they all contributed to the writing process. Brian May, Freddie Mercury, Roger Taylor and John Deacon – the writing credits for their biggest hits are spread out between them. Unlike say Jagger and Richards or Lennon and McCartney, here you have a four-way creative split and I wanted to give them all equal billing. Yes, Freddie was flamboyant and his camp theatrics are a big part of Queen, but the band are more than just a frontman. To reflect this sense of balance between them I created a design that featured each of their iconic instruments. And by making the instruments the focus, I wanted to convey Queen’s skill as musicians as well as their passion for their craft.

“The Bechstein™ grand piano is the one Freddie played on Bohemian Rhapsody. Eagle-eyed super-fans might spot that the piano keys showcase the opening chords to the song. Brian May built his Red Special guitar as a teenager and the neck is made from a 200-year-old fireplace. Roger Taylor’s Ludwig™ bass drum is decorated with the Queen crest, as it was in the band’s early days, while John Deacon’s Fender Precision Bass™ is the same model he plays in the video for Don’t Stop Me Now. The Queen logo is placed in the centre and underscored with Freddie’s signature mic stick. The bass player who shunned the limelight, the multi-instrumentalist on drums, the guitar virtuoso brandishing a sixpence and the piano playing lead singer with an extraordinary vocal range. Together you have all of the component parts that gave the band their special dynamic.

“It’s a huge honour for my design to have been selected. Not only are Queen one of my favourite bands but this is also the first time a band has been featured on a UK coin. It’s a great privilege to be a part of numismatic history. I hope Queen fans get as much enjoyment from the coin as I did working on it.”