What is it about the humble penny that makes it a favourite, even lucky, little coin? The penny has survived more than a thousand years and remains a part of our coinage system today.

To find the origins of the penny, we need to look back to the Frankish kingdom where the system of counting coinage in librae, made up of 20 solidi or 240 denarii, originated. The practice crossed into England quite early on, perhaps in the seventh century, and formed the cornerstone of British coinage for more than a thousand years.

There were 20 shillings to the pound and 12 pennies to the shilling, making 240 pennies in total. Early on, the silver penny only occasionally achieved the weight of 1/240th of a pound but by the reign of William I, minting was more consistent and an exact weight could be achieved. Keeping a silver penny in circulation became challenging as the price of silver rose, making the penny smaller and smaller over time. From 1660, silver pennies were only struck as the annual Royal Maundy coins, a practice that continues to this day. ‘Maundy money’ consists of silver coins that are given to the same number of people as the monarch’s age. So, on Her Majesty The Queen’s 94th birthday, she distributed 94 maundy gifts. Maundy pennies are instantly recognisable as they carry the very first coinage portrait of The Queen, created at the start of her reign by the sculptor Mary Gillick.

From 1797, the penny was struck as a large copper coin – known as the ‘cartwheel penny’ – before becoming smaller and lighter by the reign of Queen Victoria and bronze pennies from Victoria’s reign were used right up until decimalisation.

On 1 March 1966, James Callaghan, Chancellor of the Exchequer, announced that the United Kingdom would move to a decimal currency. The penny, unlike coins such as the threepence, shilling or crown, survived the change as a hundredth of a pound. Whilst today we have a modern, technologically advanced, coinage system, there is still an echo of the past in the very existence of the penny and the fact that the pound sign we use is simply an elaborate ‘L’, for ‘LIBRA’.

BEHIND THE DESIGN – THE ART OF TIME TRAVEL

WHAT MADE ALFRED GREAT? 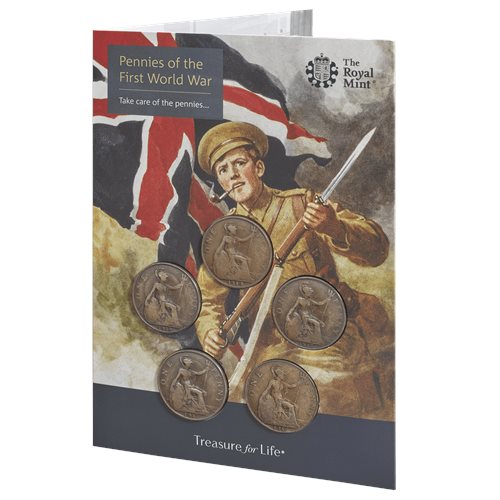 The story of Britain from Victoria to Elizabeth, penny by penny.

View the Medieval Coins which are provided from The Royal Mint