The legend of St George and the dragon

According to legend, St George was a Roman soldier who was born in the third century AD and was condemned to death by the Roman Emperor Diocletian for refusing to give up his Christian faith.

Over the following centuries, St George became a hero figure, symbolising courage and strength. In his book Gesta Regnum, the historian William of Malmesbury recorded a vision of St George joining English knights in the Battle of Antioch in 1098. The description inspired a vigorous cult of St George among the crusading knights.

A shrine was erected for St George at Lydda, supposedly the place where the Greek hero Perseus rescued Princess Andromeda from an evil sea serpent. Perhaps that’s why the saint’s story became intertwined with the legend of killing a ferocious creature. The shrine soon became a special place for crusading knights on their way to the Middle East.

By the thirteenth century, St George the Dragon Slayer was being portrayed with the red cross of the crusader. He symbolised the victory of good over evil, and became one of medieval Europe’s greatest legends.

By 1348 St George had become such a symbolic figure in England that Edward III made him the nation’s patron saint. The King also instigated the Order of the Garter, the highest award he could bestow on his subjects. Its official sanctuary is the Chapel of St George at Windsor Castle, and its insignia contains the badge of St George slaying the dragon. 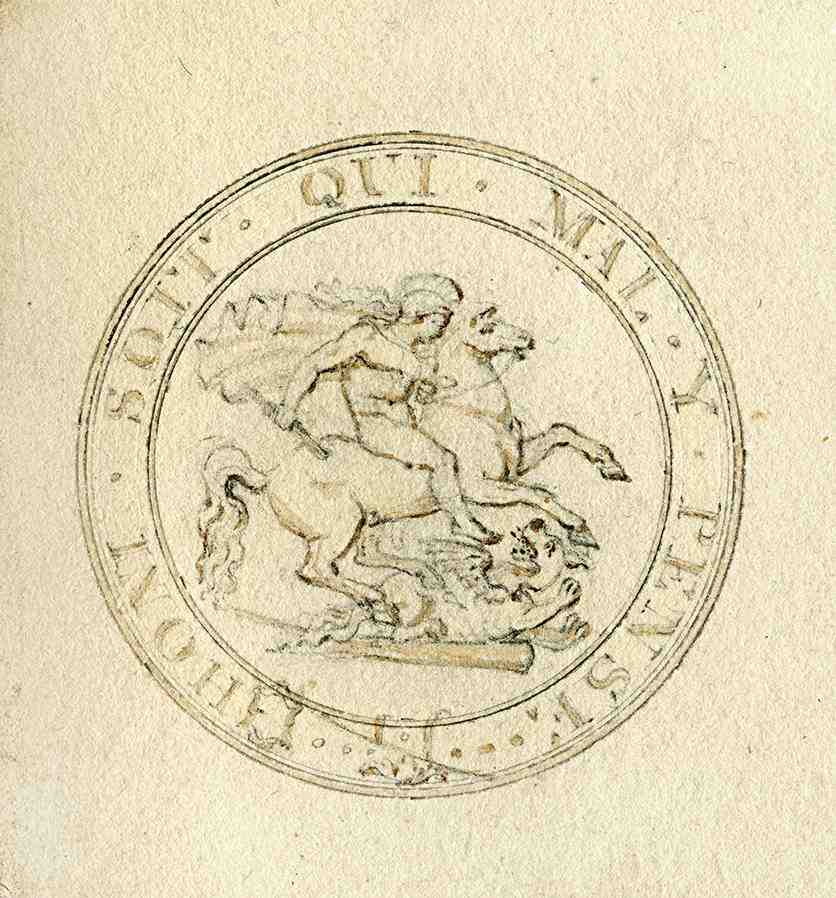 St George and the gold Sovereign

Over the ages, St George continued to inspire people. For instance, Shakespeare ended his famous battle speech in Henry V with the words, “Cry God for Harry, England and St. George.”

The patron saint also struck a chord with his namesake, King George IV. When George IV wanted to introduce a new coin he picked the saint as the coin’s subject.

The new gold Sovereign was created in 1817 and was designed by the Italian gem engraver Benedetto Pistrucci. His approach to the design was a refreshing change to the heraldry that had traditionally featured on coins.

Pistrucci created a motif of St George slaying the dragon, and gave him a sense of movement and confidence. St George was portrayed as a naked Greek horseman, effortlessly keeping control of his horse while fighting the wounded dragon.

The coin design has become a classic, and the coin expert Humphrey Sutherland praised it as one of the noblest innovations in English coin design from 1800 to the present day. Many collectors and historians would agree with him.

Saint George became the patron saint of England after the great warrior King Henry V used him in his speeches to motivate his soldiers. This has been attributed to the Battle of Agincourt when Henry V beat the French in 1415. Ever since then, St George has been the patriotic rallying point for the English people.

Henry V (16 September 1386 – 31 August 1422) was the second English monarch of the House of Lancaster. Despite his relatively short reign, Henry's outstanding military successes in the Hundred Years' War against France, most notably in his famous victory at the Battle of Agincourt in 1415, made England one of the strongest military powers in Europe. Shakespeare’s play Henry V has the famous speech which ends mentioning St George

“Once more unto the breach, dear friends, once more”

BY WILLIAM SHAKESPEARE
(from Henry V, spoken by King Henry)