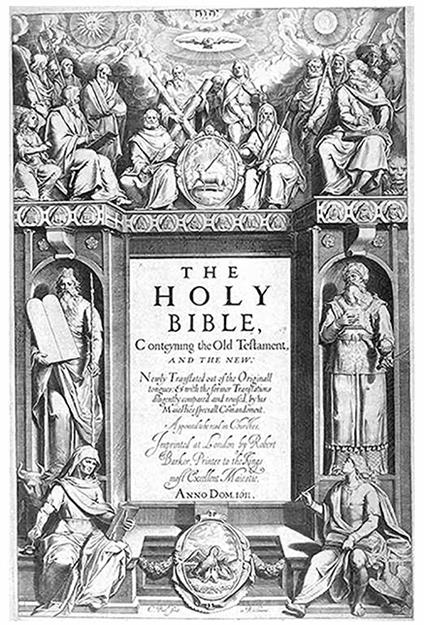 Article provided with thanks by Sir Andrew Motion, trustee of the King James Bible Trust www.kingjamesbibletrust.org

Most good books need no personal introduction. This Good Book demands one. Because it was written to communicate the word of God, rather than primarily to manifest literary merits, everyone who expresses an opinion about its well-attested beauties needs to establish their relationship with its articles of faith. Unless they do so, there will always be an invisible agenda, informing and/or distorting whatever they say.

So to be clear from the start, my agenda is this: I was raised in the Church of England, and at home and school (a boarding school, and an Oxford Movement foundation) the Bible was a cornerstone of daily life. Specifically, the King James Version. Its words and rhythms are, for me, inseparable from all questions of what I now believe and how I believe it. Saying so, of course, implies that Word and word cannot easily be separated - but I have no difficulty with this idea. Like many writers (and most poets) I’m happy to accept that the ‘meaning’ of a text depends as much on the sound it makes as it does on the sense it carries.

St John himself seems to support this idea, and says as much at the beginning of his gospel. But where does this leave people with no faith, who might also enjoy the language of the King James Version for its own sake? They turn to it as ‘literature’, of course – and in the process run into heavy fire. “I could fulminate against the men of letters who have gone into ecstasies over… the Bible as “the noblest monument of English prose”’ said T. S. Eliot. ‘[They are] merely admiring it as a monument over the grave of Christianity’. And here’s C. S. Lewis, discussing the question of its influence on later writing: ‘I am not at all sure that a resemblance in rhythm, unless supported by some other resemblance, is usually recognisable. If I say “At the regatta Madge avoided the river and the crowd” would this, without warning, remind you of “In the beginning God created the heaven and earth”?’

The question of whether we should – whether we are able – to regard ‘the Bible as literature’ has loomed in the background of this year’s celebrations of the four hundredth anniversary of the King James Version. But the terms of the debate have been noticeably less heated than they were two or three generations ago, when Eliot and Lewis had their say. Why is this? Perhaps because we live in a more obviously secular society, and the old separations between faith and literature simply don’t matter so much to so many people. Perhaps because another controversy has become more central to our concerns. This time, the most urgent argument thrown up by discussion of the King James Version has been around the subject of accessibility – with the advocates of more recent translations extolling the values of accuracy and intelligibility, and chiding those who defend the King James Version as sentimental or old-guard or elitist.

These critics have a point – the qualities they promote are important in their own terms, and connect very powerfully with important contemporary issues: access, inclusion, equality. But does this mean recent celebrations of the King James Version are also its last hussah? That now we should expect to see it shuffle off into the Curiosity Corner of national life, into the candle-lit naves of backward-glancing churches, and into secular English courses at universities?

Maybe so – but the losses would be grievous. For one thing, those thousands (millions?) of us who grew up knowing the King James Version as the sound of our faith will have our acoustic impression of God severely restricted. The modernists can say what they like about accessibility, and we can respect their opinion, but nothing in their arguments can alter the fact that a certain sort of not understanding matters a great deal to many people’s apprehension of the Divine. We don’t want clarity and actuality at the expense of everything else that matters. We want a sense of the numinous – and depends on associations built up over a lifetime.

It depends on richness of language as well - on symbolic resonance, and on poetry. Every other kind of discourse in life exists to spell an exact proposition. Poetry doesn’t. Poetry exists to free our imaginations by and through acts of sympathy and identification. It lifts us to a realm of experience where we ‘know things on our pulses’ (as Keats said) rather than in our rational intellects alone. The King James Version, although substantially written in prose, has this richness of poetic language on every page – and in this respect is still able to fulfil the purpose that its translators originally intended for it. They understood that ‘accessibility’ was only half the story. The other half was inspiration. By combining the two they allowed both to realise their whole potential.

This alone is a very good reason to cherish and celebrate the King James Version. But there’s (at least) one more thing: influence and legacy. Not just the influence on later writers that can be particular and dynamic (we have only to think of Wilfred Owen to see how dynamic). But on the fabric of language itself. No other book, not even Shakespeare’s Plays, have given us so many phrases, (‘salt of the earth’, ‘thick as thieves’), and so many archetypal contexts and references (the writing on the wall, the fly in the ointment). More potently still, no other book has so profoundly shaped our idea of ceremonial and occasional language. Our understanding of what it is to be formal, and of how to frame our words to best suit an occasion, depends greatly on ideas we have inherited from the King James Version – whether we realise it or not. This translation is not just the blood in the veins of our culture, but the veins themselves.