The Royal Mint – The Queen’s Beasts The Yale of Beaufort

The Royal Mint – The Queen’s Beasts The Yale of Beaufort

High resolution images can be downloaded from the following link: DOWNLOAD 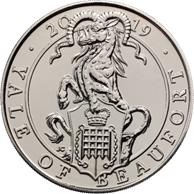 Today, The Royal Mint unleashes the mythical Yale of Beaufort as the sixth coin in The Queen’s Beasts collection. The Yale is one of ten heraldic Beasts that form the Queen’s Beasts collection. Inspired by these ancient symbols of power and identity, the range brings to life the ten imposing statues that are part of an enduring legacy that define our ruling dynasties.

The Yale descends to The Queen through Henry VII, who inherited the beast from his mother, Lady Margaret Beaufort, who had played a role in the Wars of the Roses. Her position as matriarch of the Tudor dynasty gave the Yale prestige and symbolic meaning. The Yale is a mythical beast, described as the size of a hippopotamus with the tail of an elephant, the jaws of a boar and of a black or tawny colour and has the ability to swivel each of its horns independently to use as a prominent weapon.

Following the success of previous coins in the collection, the latest release features another original design by Royal Mint coin designer Jody Clark. Jody is best known for his ‘fifth portrait’ of The Queen seen on UK coinage series since 2015, but has also spent a great deal of time researching British heraldry to come up with his Queen’s Beasts designs.

Jody says of his design, “As the yale is one of the more obtuse and mythical creatures of The Queen’s Beasts, I did a lot of research into its background and its influence which has been carried through to the modern day. It was evident within my research that the yale has been depicted differently throughout the ages but the most interesting aspect, for me, was its horns as they are a constant feature in many depictions. I wanted this to be a focal point in my design, as well as maintaining its mystery and ancient heritage.

Even though the yale isn’t a real creature, I wanted the design to portray the yale as a creature of regal stature, a creature which is both rare and magnificent. I looked at lots of images of animals such as wild boars, goats, bulls and elephants to get the elements of the yale just right.”

The Yale of Beaufort commemorative coins are available to purchase from www.royalmint.com in a range of precious metal and base proof finishes, prices start from £13.