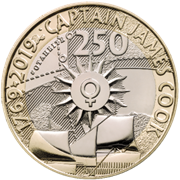 Today, The Royal Mint has launched the second of the three coins marking the 250th anniversary of Captain Cook’s great voyage.

The son of a farm hand, Captain James Cook grew up in the historic port of Whitby in North Yorkshire, England, from the age of 17. In August 1768, Cook and his crew set sail on HM Bark Endeavour, commencing what would become a three-year voyage of discovery.

The second leg of Cook’s voyage of discovery would take him into the Pacific Ocean, some 3,000 miles further from Rio de Janeiro. By the time he sighted Tahiti on 22 April 1769 he had sailed a further 5,000 miles. After exploring Tahiti and observing the Transit of Venus, Cook opened his sealed orders and set sail due south.

Nicola Howell, Director of Consumer Business at The Royal Mint said, “We are delighted to introduce the second of the three coins marking the 250th anniversary of Captain James Cook’s great voyage. Captain Cook is one of the greatest figures in British history, and this three-coin series is a fantastic way to celebrate his legacy of scientific discovery and exploration.”

Artist Gary Breeze commemorates Captain Cook’s time at Tahiti in 1769, with a design featuring the mast of the HM Bark Endeavour below a celestial image of the Transit of Venus. Gary used a font of his own for the inscription on the circumference of the coins, in contrast to the text that highlights the key locations in the expedition such as ‘Otaheite’.

Gary, commented on the inspiration behind the design “I didn’t tackle the three coins separately – I wanted to create a design that would work when the three coins were united. I was inspired by UK’s definitive circulating coins with the puzzle style design that unites to make the shield of the Royal Arms; I think that was a brilliant idea for collectors to enjoy.”

This is a commemorative coin and will not be entering general circulation, so this is the only way to own this special coin. The commemorative £2 coin is available to purchase from The Royal Mint website.