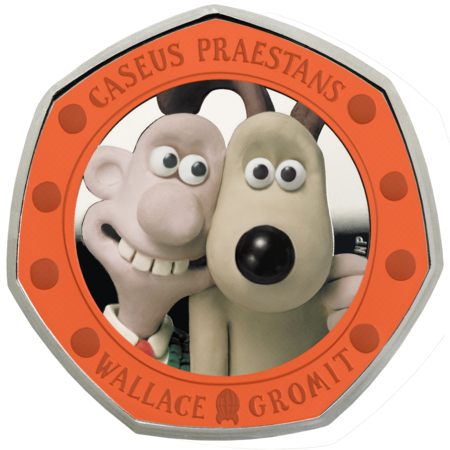 The coin is inspired by the original Wallace & Gromit short film, A Grand Day Out which saw the pair build and launch a rocket ship to the moon, where they tuck in to a picnic of moon cheese and crackers.

Featuring the Latin inscription ‘CASEUS PRAESTANS’, which translates to ‘cracking cheese’, the coin depicts Wallace and Gromit and the outer shell of the rocket ship that took the duo to the moon. The cracking coin was designed by the creator of Wallace & Gromit, Nick Park and the team at Aardman.

Since A Grand Day Out was first screened in 1989, Wallace – a good-natured, eccentric and cheese-loving inventor – along with his companion Gromit – a silent yet loyal and intelligent dog – became one of the nation’s most loved, iconic duos. The pair went on to star in three further half hour specials and are internationally celebrated winning over 100 awards at festivals - including 3 Academy® Awards and 5 BAFTA® Awards.

Nicola Howell, Director of the Consumer Division at The Royal Mint, commented: “Wallace and Gromit are two of Britain’s most loved characters, so we felt it was only right that we marked this momentous anniversary by giving them a place on UK coinage. The films are such a huge part of our popular culture and are loved by generations of all ages, so we’re delighted that we can be a part of the 30th anniversary celebrations.”

Nick Park, Creator of Wallace & Gromit and Director at Aardman, added: “When A Grand Day Out was first screened thirty years ago, we never expected for Wallace & Gromit to become such a long-standing, well-loved series around the world. It’s been an honour to work with The Royal Mint to bring the pair to life in a new way and everyone at Aardman is so excited to see the pair on a coin.”

Available in a range of finishes from www.royalmint.com/wallaceandgromit, the coins start at £10 for Brilliant Uncirculated finish coin, whilst the limited edition silver proof coins capture Wallace & Gromit in vivid colour detail. The coin will not be entering general circulation, so this is the only opportunity to get your hands on one of these special coins.

Fans of the duo will be able to strike their own Wallace & Gromit coin at The Royal Mint Experience in Llantrisant, Wales, where there will also be Wallace & Gromit sets on display for a limited time only. On 1st November, Aardman model making experts will be running clay modelling workshops from the visitor centre, where you can make your own Gromit to take home.

Throughout history The Royal Mint’s name has been synonymous with precious metals and bullion. The organisation trades physical and digital precious metal worldwide via www.royalmintbullion.com and a global network of distributor partners.

Aardman, based in Bristol (UK) and co-founded in 1976 by Peter Lord and David Sproxton, is an independent and multi-award-winning studio. It produces feature films, series, advertising, games and interactive entertainment - such as the ‘visually astonishing’ (The Guardian), BAFTA nominated console game, 11-11: Memories Retold, and the four-times Gold Cannes Lions-winning StorySign app - and innovative attractions for both the domestic and international market, including a new 4D theatre attraction at Efteling in the Netherlands. Its productions are global in appeal, novel, entertaining, brilliantly characterised and full of charm reflecting the unique talent, energy and personal commitment of the Aardman team. The studio’s work – which includes the creation of much-loved characters including Wallace & Gromit, Shaun the Sheep and Morph – is often imitated, and yet the company continues to lead the field producing a rare brand of visually stunning content for cinema, broadcasters, digital platforms and live experiences around the world. In November 2018 it became an Employee Owned Organisation, to ensure Aardman remains independent and to secure the creative legacy and culture of the company for many decades to come. www.aardman.com

Wallace and Gromit, Aardman’s most loved and iconic duo have been delighting family audiences around the world for 30 years. First hitting our screens in Nick Park’s Academy Award®-winning ‘Wallace & Gromit: A Grand Day Out’ (1989) the pair went on to star in three further half hour specials (Wallace & Gromit: The Wrong Trousers (1993), Wallace & Gromit: A Close Shave (1995) and Wallace & Gromit: A Matter of Loaf or Death (2009)) and a feature length film Wallace & Gromit: The Curse of the Were-Rabbit (2005) and are internationally celebrated winning over 100 awards at festivals - including 3 Academy® Awards and 5 BAFTA® Awards.

A regular highlight of the primetime BBC schedules, especially during the festive season, they have become British national treasures and icons in their own right. ‘Wallace & Gromit: A Matter of Loaf or Death’ still remains the most watched Christmas Day programme since 2005 when it premiered on BBC One. With a permanent attraction at Blackpool Pleasure Beach with over 500,000 riders every year, over 1 million fans on Facebook and over 15million views on YouTube, these perennial characters continue to grow audiences across multiple platforms.

Wallace & Gromit's Children's Charity is a national charity raising funds to improve the lives of sick children in hospitals and hospices throughout the UK, raising over £50million since 1995.