The official London 2012 Olympic and Paralympic coins | The Royal Mint

Two British students have had the honour of designing the official UK coins to celebrate the London 2012 Olympic and Paralympic Games. The two designs – one for the Olympic Games and one for the Paralympic Games – will soon be in the hands of Games enthusiasts around the world, ahead of next summer’s Games. 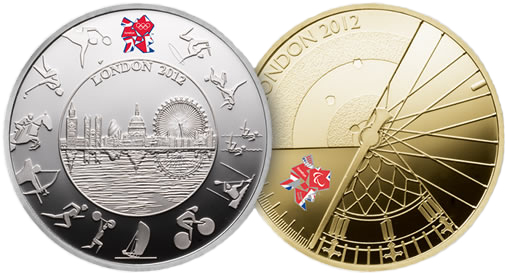 Since the Helsinki summer Olympic Games in 1952 it has been tradition for commemorative coins to be struck in celebration of the Games. Now 24-year-old architectural student Saiman Miah from Birmingham, and mature graphic and media design graduate Pippa Sanderson from Malvern, Worcestershire, have joined the artistic elite creating two £5 coins which will be permanent and much-treasured mementos of London 2012.

The winning designs were selected following a Royal Mint competition for art and design students attending higher education colleges and universities across the UK. Students were challenged to create a design celebrating the capital’s role as host city of London 2012, including the Olympic and Paralympic Games logos. Designs were requested that could be symbolic or literal and could involve the use of emblems or lettering.

As well as the honour of designing the official London 2012 Olympic and Paralympic Coins the winners also receive £5,000 prize money. The coins, both of which are UK legal tender, will go on sale this month and are expected to be collected by thousands of Games enthusiasts around the world.

The winning designer of the official Olympic coin, Saiman Miah, is currently studying for his Masters degree at the Birmingham School of Architecture. The inspiration for his design came from his love of architecture and includes a detailed impression of London’s iconic skyline. Saiman also incorporates pictograms of athletes around the edge of the skyline to create a clock face referencing to another London icon, Big Ben.

Pippa Sanderson, who recently graduated with a First Class Honours Degree in Graphic and Media Design at Hereford College of Arts, designed the London 2012 Paralympic Coin. Taking inspiration from the Games, Pippa’s design celebrates accuracy, manoeuvrability and speed by using the round shape of the coin along with circles found in the Games. Split into these four sections, her design features a spoked wheel for manoeuvrability, a target for accuracy and a stopwatch for speed and includes the face of Big Ben to represent London.

The first Olympic coins can be traced back to 480BC, introduced as souvenirs by the ancient Greeks. Today, the Royal Mint is continuing the tradition as the official supplier of commemorative coins to London 2012. From millions of sporting 50ps currently in circulation, to valuable and highly artistic gold coins inspired by classical mythology, the Royal Mint is marking the Games with a range of coins that appeal to everyone, from children collecting their first Olympic souvenirs, to specialist collectors seeking rarity and beauty.

The Royal Mint was established over 1,000 years ago and has a long and distinguished history of commemorating important national events. With the Olympic and Paralympic Games and Her Majesty The Queen’s Diamond Jubilee both taking place next year, the eyes of the world will be on London and the UK; and both Saiman and Pippa have created coins that will be treasured reminders of the global celebration.

To purchase a coin or for further information on the Royal Mint’s full London 2012 collection, please visit www.royalmint.com